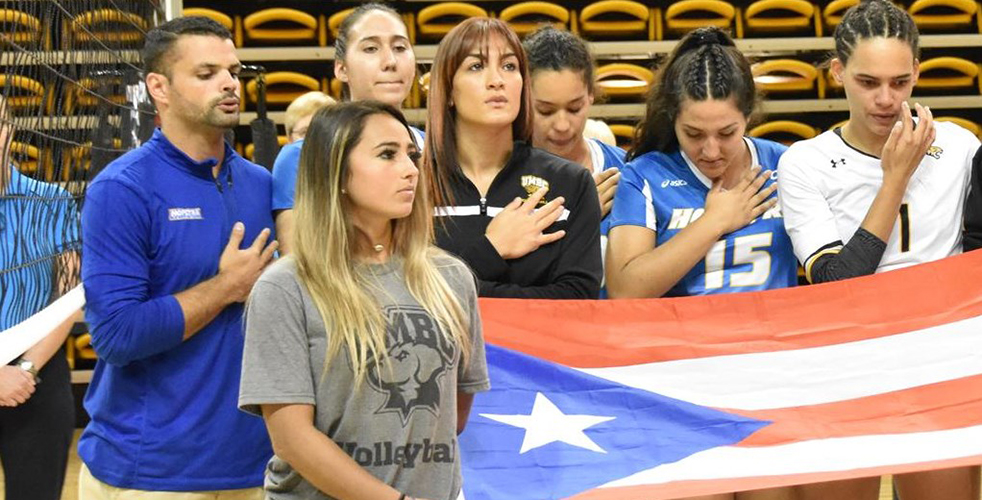 On Wednesday, Sept. 20, Hurricane Maria, a Category 4 storm, made landfall in Puerto Rico, leaving a wake of destruction and despair on the island nation.

All natives of Puerto Rico, the group watched on helplessly as their island was ravaged by one of the worst hurricanes in its history.

“I was the only one who experienced a hurricane before,” said Vélez mentioning Hurricane George in 1998. “It was Category 2 or 3. I just still in my mind hear the sound of the wind. The sound of the wind was creepy; it was like a witch all the time. So this is always in my head. [George] was a Category 2 or 3; this was a 5. I was very scared. Because I knew it was going to happen worse than in 1998.”

By 3 a.m., all communication to the island had been cut off. Ortiz, a freshman from San Juan, fortunately had her parents visiting her in Hempstead and was the first of the Hofstra group to hear from other family members on the island. But, as of Wednesday, Oct. 4, Figueroa, a senior from Juncos, had heard from her family just once. Velez hadn’t heard from his family until Sept. 30, 10 days after the storm hit.

“We just see pictures and videos, but we’re not there actually to experience it, and we know they’re probably suffering,” said Perez, a junior from Toa Baja. “When my mom calls me, she’s not telling me everything. So inside I know there’s so much more going on.”

Puerto Rico has a population of 3.4 million, and 100 percent of the island remains without power, with authorities stating that it could take up to six months for power to be restored. The death toll has risen to 34, and between 80 and 90 percent of homes on the island have been completely destroyed.

“Our culture is so strong,” said Perez. “When the hurricane came and hit us, people were like, ‘Oh, we’re okay.’ But they’re saying, ‘Oh, we’re okay because we didn’t die.’ Because, for them, just the fact that they’re okay is perfectly fine. It’s just incredible how people can still be smiling every day, celebrating, dancing, salsa, every day, and they’re still going through this.”

Ortiz added: “I’ve seen that there’s a six-hour line to get gasoline, and they’ve used that to just, while they’re waiting, sit down and talk and get to know each other, listen to music. Right now, it’s the worst that Puerto Rico has been, and I still see and feel that they’re not down. They know we’re going to get better.”
For the Hofstra group, all five are thankful to be safe themselves, but feel helpless and heartbroken being away from their families. But they’re all trying to do their part from Hempstead.

“I have mixed feelings because I’m here, I have all the stuff, all the comfort, but they don’t have that,” said Leon, a senior from Ponce. “And I have to deal with that every day when I wake up thinking if my family’s okay, what they need, what I can provide for them from here, what I can send to them.”

The three volleyball student-athletes, who are in the middle of their season, have written “Puerto Rico” on the inside of their volleyball shoes.

“I always have Puerto Rico on my mind when I’m playing because that’s where I came from, but now we’re playing for Puerto Rico,” said Ortiz. “We use it as a motivation for us to be stronger. We’re not there to go through what they’re going through, so at least we can just make our part here.”

While at times over the past few weeks, playing and coaching their respective sports has been incredibly trying while carrying the emotional weight of the events at home, the Hofstra group has taken solace in sport and in each other.

“At the beginning I was like, ‘Oh my God, I’m getting distracted, because the hurricane just happened, I’m here, I don’t know about my family,’ but playing volleyball, you don’t get to think about it too much,” said Figueroa. “Being with them here, it’s a little bit calm. I get to talk to them about the situation.”

On and off the basketball court, Leon has felt the same support and compassion from her teammates and coaches, as well as the rest of the Hofstra community.

“I’m very thankful that I have my coaches here, my team, and they’ve been keeping me going. Otherwise, I don’t know what I’d be doing now. Coach [Krista Kilburn-Steveskey] was like, ‘If you need time, take that day off, whatever you need to do,'” Leon said. “I’m blessed to have my second family here. Words can’t describe. Even the athletic department, professors, my teammates, other outlets like the girls from volleyball and Esaí, and other people that are just giving me so much love. All I need.”

“It was very emotional even though we prepared for that, we had the script, we’re going to know,” said Vélez. “Then I would say that the most beautiful part was the national anthem. I think 95% of the group started crying or had a feeling. The national anthem is very important for us, so it was like, ‘Wow, this is union.’ Even Towson and Hofstra, it’s a big rivalry, but at the same time, what they did and how they involved us was beautiful.”

Since Sept. 20, Hofstra Athletics’ five Puerto Rico natives have run the emotional gamut. Hofstra Volleyball swept Towson in that match, beating the previously undefeated Tigers. The team is now 3-1 since Maria, off to a strong start in CAA play. Leon and Hofstra Women’s Basketball opened official practice on Oct. 3, as Leon prepares for her senior season.

But Puerto Rico has never left their minds.

“I have everything there – my family, friends,” said Figueroa. “I love my island, I’m in love with my island, and I wish I could be there.”

For those interested in donating to Hurricane Maria relief efforts, consider the American Red Cross.