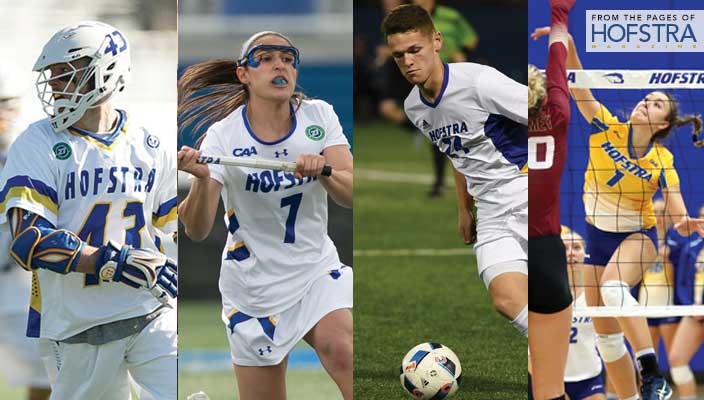 The Pride’s Four CAA Rookies of the Year

They arrived at Hofstra from across the ocean and just over the county line, four first-year student-athletes just hoping to fit in. Instead, they stood out, becoming one of the most successful rookie classes in Pride history.

It didn’t take long for any of them to make their presence felt.

All four scored in their first games. Brown, Tierney and Parrella, in fact, each scored on their first collegiate shot – and scored the first goals of the season for their teams.

Brown, a native of Cambridgeshire, England, scored his first goal just over 19 minutes into the men’s soccer season opener at Stony Brook. But for him and fellow international student Masciullo, playing at a higher level almost seemed like the easy part.

“The toughest challenge was actually moving away from home and all my friends and family,” Brown said. “But everyone gets on really well as a team, so it’s easy to settle in, and when everyone around you is in the same situation, it makes it seem like it’s not even an issue.”

Masciullo, who grew up in La Spezia, Italy, also excelled on the court, posting arguably one of the best rookie campaigns in volleyball program history. She led the Pride in points and kills – averaging 3.87 points and 3.41 kills per set – and helped Hofstra to an undefeated record at home.

“Coming to the U.S. was a huge change for me,” she said. “I realized the importance of that decision just when the airplane to New York was taking off. Italy and the United States are really different. (But) As soon as I got used to it, it all went great. I loved the perfect organization and the determination that characterize the American scenario.”

Long Island lacrosse phenoms Tierney and Parrella had a much shorter commute to Hempstead, and they were no strangers to Hofstra Lacrosse when they arrived on campus.

For Tierney, it took less than three minutes for him to find the back of the net in the season opener against Monmouth.

“My favorite moment from this season was probably scoring that first goal,” said Tierney, a Massapequa native, who helped the team to a record-setting 10-0 start in 2017. He finished second on the team with 31 goals and 47 points. “It really relaxed me into that first game and let me know that this level isn’t too far off. I could do it.”

“It was nerve-racking in the beginning, but the transformation was easier than expected, mainly because of the girls on the team and the coaches,” said Parrella, whose first collegiate goal knotted the score at one in an eventual 15-5 season-opening thumping of Bucknell.

“Once the first game was over, the nerves became more anxious excitement and the pace of the game just became so much fun to play,” she said.

Now, this rookie class has just one goal in their sights: a CAA Championship.

“We are hungry for it,” Parrella said, “and we have the mindset.”

A Letter From President Stuart Rabinowitz
Number One And Buffalo Bound