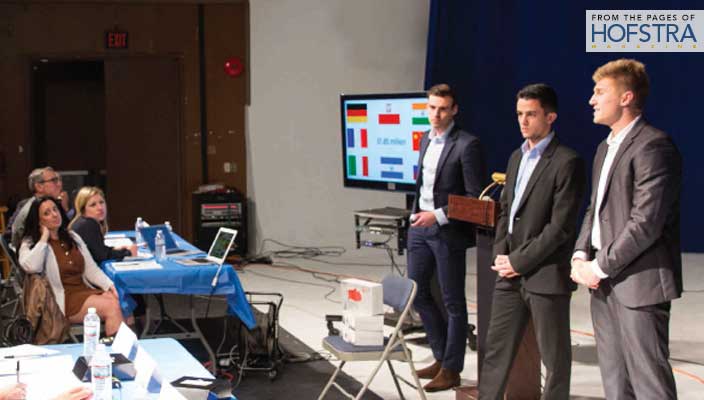 For soccer players Henry Crayton, Rory Murphy and Lerthon Theuma, it’s all about the pitch.

The trio, members of the 2015 Colonial Athletic Association Men’s Soccer Championship team, is $30,000 richer after taking top honors in

the 2017 Hofstra-Digital Remedy Venture Challenge and the regionals of the New York State Business Plan Competition for their startup idea, called CountryBox.

The budding entrepreneurs won first place and $20,000 in seed money in the Hofstra-Digital Remedy contest, and $10,000 for placing in the top three of the regional competition.

Crayton, Murphy and Theuma are all international students who developed the idea for CountryBox based on their own experiences as expats longing for an affordable way to get their favorite snacks and foods from home. They conceived their plan for the CountryBox e-commerce website on a men’s soccer road trip in fall 2016. “We were on an away trip, and we were discussing foods that we were missing from our home country, and we were like, ‘Let’s look them up,’” said Theuma, who is from Malta. “We used Amazon and couldn’t find them really, so we thought, ‘Why not start our own business?’”

Later in the school year, Murphy, who is British, notified the group that a business competition was coming up. After tossing around other ideas, Crayton, originally from New Zealand, circled back to CountryBox. Deciding on a whim to go forward with the competition, the group gave its first presentation with just a few days’ preparation.

“We were kind of just doing it for a bit of fun because we thought we might have an off chance of winning some money, and then when it got such good reception, we thought, ‘Why don’t we really put a lot of time and effort into this and try to make it something big?’” said Murphy.

The Venture Challenge is run by the Center for Entrepreneurship and sponsored by Hofstra trustee and alumnus Mike Seiman, founder and CEO of Digital Remedy, formerly known as CPXi.

“This was our strongest competition yet,” said Mark Lesko, Hofstra vice president for economic development and executive dean of the Center for Entrepreneurship. “The commitment of the students, and the quality of their ideas and presentations were really extraordinary.”

To prepare, the CountryBox group built the website, consulted with fellow international students, and talked with vendors. Then, they pitched their idea to a tough panel of judges at the finals of the Venture Challenge – a nerve-racking task even for seasoned Division I athletes.

“Right before a pitch, it’s a different rush,” said Theuma. “It’s not like you’re going on the field and once you’re on the ball, you’re calm. It’s something brand-new to us that we never really did before.”

But as athletes, their competitive nature helped fuel their desire for success in the business world. “We all want to win, so we all probably put in the extra effort that we needed to, just based on being athletes and kind of being used to that,” said Crayton. “[In soccer], you learn the value of hard work. You work hard, you get your reward. There’s no shortcut to it.”

That’s the philosophy of Hofstra Men’s Soccer Coach Richard Nuttall, who emphasizes the importance of success off the field to his student-athletes.

“I’ve always said as a head coach, I measure myself just as much on what they do when they graduate from here and how they are as people on campus as I do in wins and losses,” Nuttall said.  “I’m incredibly proud not only of what they’ve achieved, but how they’ve achieved it. It’s not a shock to me … because I’ve spent a lot of time with them, and they’re focused, goal-driven young men.”

The trio graduated from the Frank G. Zarb School of Business in May.

Crayton is heading to Florida to pursue a master’s degree in business administration. Theuma is looking for a full-time job in Manhattan, and Murphy accepted a position at Nature’s Bounty in Ronkonkoma, Long Island.

In the meantime, they are in talks with potential investors to get CountryBox off the ground. “We’re still in discussion,” Theuma said. “There are a couple of people who showed interest throughout the competitions, so time will tell.”