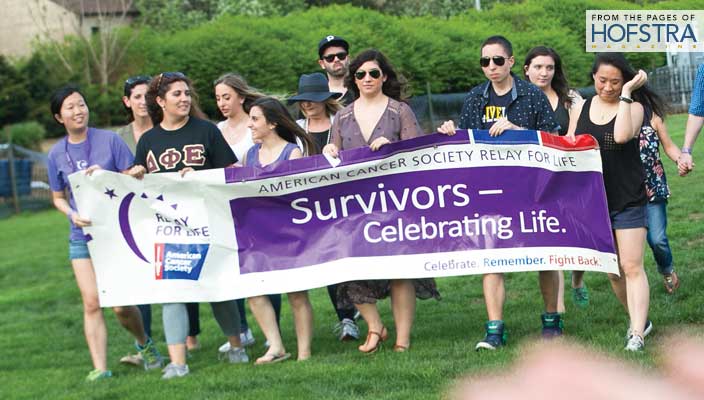 Standing on the makeshift stage in the middle of the intramural fields this past April, Annik Spencer ’14 felt ready. She scanned the audience and caught the steady eye of her boyfriend, Danny, and the wide smiles of a handful of college friends and work colleagues. It was the American Cancer Society’s annual Relay For Life fundraiser, an all-night event that she had helped plan every year as an undergrad. But this year was different.

She was no longer just a volunteer.
She was a survivor.

“When I helped with Relay during my college days, I seem to remember that many of the survivors were older – usually parents or family members of Hofstra students,” said Spencer, who was invited to be the key speaker at this year’s event. Every year, Hofstra’s Relay For Life draws hundreds of members of the campus and local communities to walk the field’s track to raise money for cancer research and honor those affected by the disease. “This time, I was actually surprised to meet other young survivors. It was surreal to come back having gone through the experience of cancer myself.”

Two years earlier, in the spring of 2015, Spencer had been out of college less than a year, and was thriving as an account coordinator with CooperKatz & Company, a New York City public relations firm, where she worked on campaigns in areas such as real estate, financial services, education, health care, and consumer products.

“I had an adorable apartment and had just started dating an amazing guy. I had an income, freedom and happiness, and even remember walking around Manhattan and thinking, ‘Is this a dream?’” she said. “Then, just after my 23rd birthday, I felt a strange lump in my left breast.” 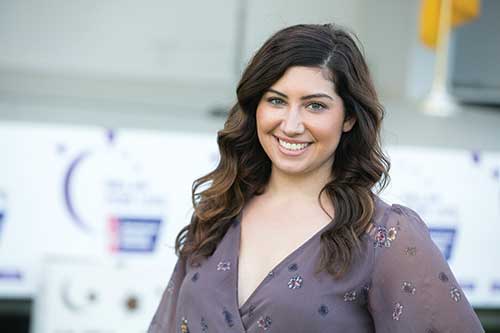 Though breast cancer is rare in young people, Spencer had always been vigilant about doing routine monthly self-exams because her mother died from the disease at age 36. Still, she and her doctor didn’t think much of the lump when they scheduled her for a mammogram.

Spencer was getting ready to head to work when she was summoned to see her radiologist. “Suddenly I was alone in New York City, being told I had cancer at age 23,” she recalls.

When her mother died, Spencer was just four years old. She has very few memories of her mother, but heard many stories from family and friends as she grew up in Rehoboth, a small town about an hour outside Boston.

“I never felt I had a broken childhood because something so sad had happened to me,” she says, largely crediting her father, Scott, for his support. He remarried a few years later, and his wife, Barbara, adopted Annik.

I had an adorable apartment and had just started dating an amazing guy. I had an income, freedom and happiness, and even remember walking around Manhattan and thinking, ‘Is this a dream?’ Then, just after my 23rd birthday, I felt a strange lump in my left breast.Annik Spencer ’14

“My dad is a minister, and being a part of a large, close-knit church family where I had to occasionally face difficult situations such as illness and death in the lives of people I really cared about also helped me deal with having lost my mom,” she said. “It made me strong, and I could understand better what others in similar situations were going through.”

She often found joy through dance, and hoped to one day teach the art to small children. Her passion led her to enroll as a dance major at Hofstra, where she spent every day rehearsing and working on choreography in the large studio located in The Lawrence Herbert School of Communication. Countless hours spent in that building drew her attention to class offerings in public relations, which she took on as a second major in the spring of her first year.

She started her PR classes around the same time that Professor Jeff Morosoff arrived to teach in the program. “I’d never had a teacher that cared so deeply about his students and wanted them to really walk out of his class having learned a lot,” she said.

Morosoff became both a mentor and friend to Spencer over the years, offering guidance on classes, internships and career prospects. He encouraged her to join the Public Relations Student Society of America, and she would later come back to its networking dinners as an alum to mentor students and recruit interns for her firm.

Spencer also used her PR and communication skills as a student aide in the Office of University Relations, where she served as a media volunteer at two U.S. presidential debates – the first as a student during the 2012 debate between President Barack Obama and former Massachusetts Gov. Mitt Romney, and again, as an alumna, for the 2016 debate between Hillary Clinton and Donald Trump.

“That first debate was the most exciting experience I’ve had at Hofstra,” she said. “I was just awestruck by how the entire world had focused its attention on this campus. It was also the first election that I could vote in, and I became really passionate about politics because every class – even my dance classes – had some aspect of the debate as part of the curriculum.”

And, every spring, there was her work helping to coordinate the Relay For Life fundraiser. She worked largely behind the scenes, not knowing that in a few short years, she would be taking center stage.

Last April at Relay For Life, Spencer spoke publicly for the first time about the days following her cancer diagnosis.

“The next six months were a blur,” she said. “Honestly, even now, I don’t remember much. It’s probably for the best. Those were the worst months of my life.”

“I felt isolated and sad; my anxiety was crippling,” she recalls. “But when you are going through something like this, you don’t really have a choice but to fight for your life.”

She had a double mastectomy, breast reconstructive surgery to receive implants, and 12 rounds of chemotherapy – as well as fertility treatments to preserve her eggs in case the chemotherapy affected her ability to have children later.

She used a device called a “cold cap” – a helmet of dry ice – for eight hours every Friday to freeze her hair follicles during chemo treatment so her hair wouldn’t fall out. She also underwent genetic testing, which showed no link to her mother’s cancer.

Her parents and brother, her boyfriend, her three best friends from high school, and a trio of women who had been at her mom’s side during her cancer battle helped her get through long hours in the chemo room.

“I was impressed by the grace and determination she showed during her ordeal, but it didn’t surprise me,” Morosoff said. “That’s who she is.”

Now cancer-free for two years, she shares three important lessons from her experience: Offer support to others, even if you don’t know what to say; pay attention to your body, even if you are young (about 1 in 8 U.S. women will be diagnosed with invasive breast cancer in her lifetime); and even with a good doctor on your side, always be prepared to advocate for yourself.

Fear of a recurrence is still with her every day, but so are reminders of how lucky she is.

“Sometimes I’ll be running over the Williamsburg Bridge or sipping a particularly good mimosa at brunch or having a kick-ass week at work, and I’ll get this warm and appreciative feeling that I didn’t have before cancer,” she said. “The relationships I have now are a lot deeper. Life is a little bit sweeter.”