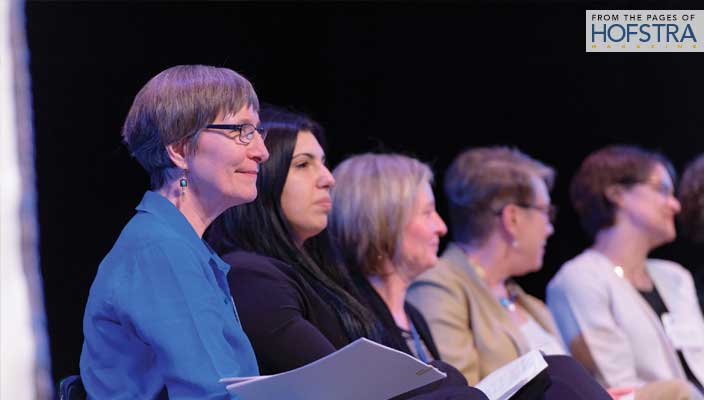 Each year, Hofstra welcomes to campus a wide range of speakers, and sponsors varied academic symposia and conferences.

Speakers and performances during the 2016-17 academic year included psychologist Keith Sawyer, the Morgan Distinguished Professor in Educational Innovations at the University of North Carolina’s School of Education, who discussed his book Zig Zag: The Surprising Path to Greater Creativity as part of Hofstra’s second annual Creativity Week;David Harvey, the Distinguished Professor of Anthropology
and Geography at the Graduate Center, City University of New York, who was the keynote speaker at the conference Marx’s Critique of Political Economy and the Global Crisis Today; author Jennifer Teege, whose book My Grandfather Would Have Shot Me chronicles
her discovery that her grandfather was the brutal Nazi commandant of the Plaszow concentration camp; Hari Sreenivasan, senior correspondent and weekend anchor for PBS NewsHour; digital marketing executive Lori Greene, founder of LPG Enterprises; and Andy Fickman, executive producer and director of the CBS sitcom Kevin Can Wait starring Kevin James.

The University also served as host for the 17th Berkshire Conference on the History of Women (“The Big Berks”), Difficult Conversations:
Thinking and Talking About Women, Genders, and Sexualities Inside and Outside the Academy. The conference, billed as the world’s largest women’s history event, brought together more than 1,500 guests from 35 countries for over 250 panels. Hofstra Professor of History Susan Yohn is president of the Berkshire Conference of Women Historians.

A Letter From President Stuart Rabinowitz
Expanding at Home and Abroad: Zarb@50