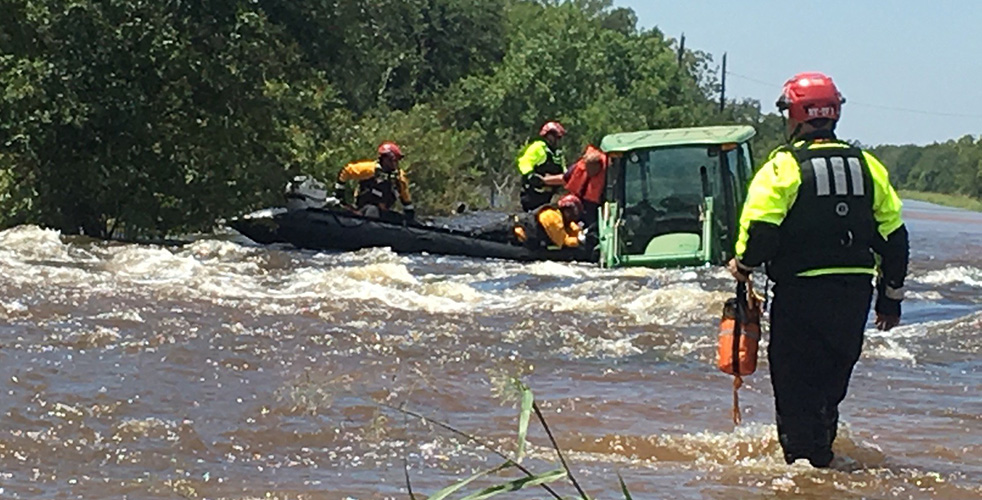 NYPD detective and Hofstra Adjunct Professor of History James Coll ’95 was deployed to Houston on August 27 as a member of the elite NYPD/FDNY Urban Search and Rescue team to assist in the aftermath of Hurricane Harvey. The mission was not Coll’s first to save lives.  When U.S. Airways Flight 1549 crash-landed in the Hudson River in 2009, Coll was a first responder on the scene. His efforts during the “Miracle on the Hudson” earned him and his unit the “Cop of the Year” award from the New York City Police Foundation.

On his way back to New York on September 5, Coll reflected on the devastation he witnessed and also the way people bonded and often risked their own safety to help one another. “The lasting impression I will take from this experience – beyond the selflessness of my fellow team members — was the sense of compassion from the people who launched their own boats or drove their own pickup trucks to those in need,” he said. “The humanity displayed when neighbor helped neighbor for no other reason except it was the right thing to do was inspiring. It was a reminder about all that is great in our country.”

Coll, who was named Hofstra Alumnus of the Month in June 2009, was sworn in as a NYPD officer in 1997. In 2002 he was selected to be part of the NYPD’s Emergency Service Unit (ESU). He was promoted in 2004 to detective and continues to work in the NYPD assigned to ESU.

Coll has been awarded numerous times, including a Mayor’s Certificate of Appreciation for an elevator rescue during the blackout of 2003, a commendation from the Life Saving Benevolent Association of New York for a water rescue in April 2006. He was deployed to Haiti after the devastating 2010 earthquake, helped rescue workers stranded when a 17th floor scaffolding collapsed and pulled a woman out of the East River in 2014.