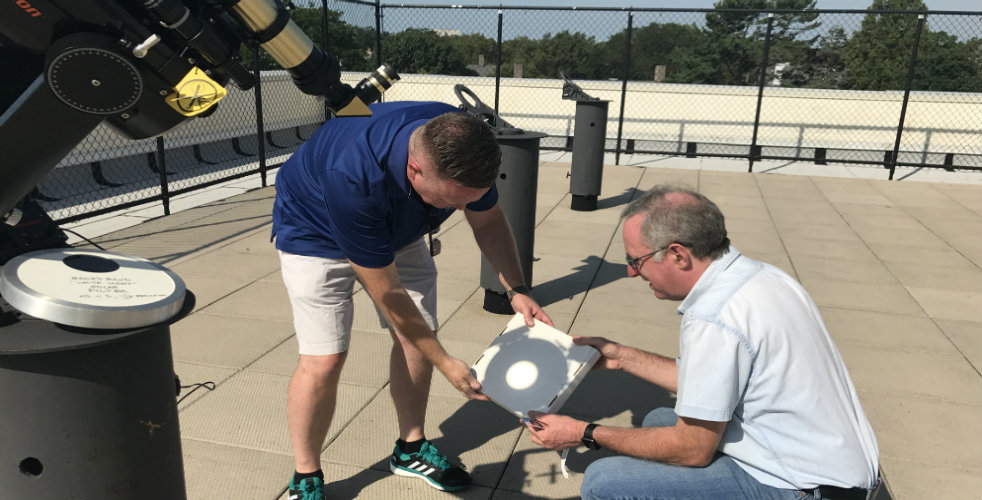 The masterminds behind the trip were Dr. Bret Bennington, professor of geology, environment, and sustainability; Dr. Stephen Lawrence and Dr. Brett Bochner, professors of physics and astronomy. Knowing that a total solar eclipse would take place in 2017, the three began years in advance to organize a class that would take students into the path of totality for a viewing of this rare event.

“People have this image of science as being something that’s done in laboratories, but for astronomers and geologists, science is something you do outside,” said Dr. Bennington. “During the day we’ll be looking down at rocks, and at night we’ll be in some really dark skies. We’ll be able to see the sky in a way that we just don’t get to see on the East Coast.”

The group left for Salt Lake City, UT on Wednesday, Aug. 16. The trip also took them through Nevada, Idaho, Wyoming, and Montana. Some activities included stargazing, hiking, fossil collecting, and of course, viewing the eclipse. The group experienced totality from the Tough Creek Campground in Wyoming – a location that was chosen because of the rich geology and dry summer conditions in the area. This was the first total solar eclipse to sweep the U.S. from coast to coast since 1918.

“Everyone was starting to feel emotional and enthusiastic when totality happened,” said music performance major Brian Lee, ’19. “There was a beautiful and wondrous glare of the corona that appeared during totality. I have no words. It felt magical. It felt like we were in a different world.”

The overall course, Astrobiology, Paleontology, and Volcanic Geology in the Western U.S., had a theme of exploring environments that may exist on other planets. As a result, the trip itinerary consisted of sites that have been carefully chosen because of their landscapes and geological features. They visited Craters of the Moon National Monument, for example – a volcanic region where tremendous amounts of lava were recently erupted. According to Dr. Bennington, it’s the kind of landscape you would find on the moon and on Mars. The hot springs in Yellowstone National Park, on the other hand, harbor heat-loving microbes that could possibly survive in similar conditions in the sub-surface oceans on Jupiter’s moon, Europa.

The group also took photos that they hope will contribute to the nationwide research effort directed at the eclipse. “Until the modern space age, a total solar eclipse was the only opportunity we had to study the mysterious outer atmosphere of the sun, called the corona,” said Dr. Lawrence. “For this eclipse, NASA is organizing groups of scientists and amateur astronomers across the country to take digital photographs during totality. This will allow us to study rapid motions and small scale changes in the corona over two hours as the eclipse progresses.”

Check out the gallery below for a recap of the group’s experience out west.