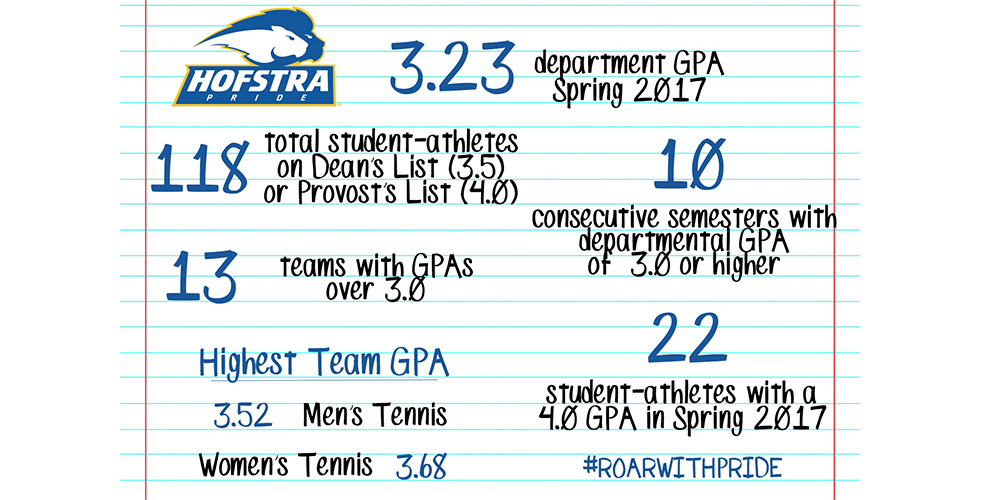 In what has become a regular occurrence for Hofstra University student-athletes, the Pride excelled in the classroom in the spring semester as they have done on a regular basis over the past few years.

The more than 300 Hofstra student-athletes compiled an impressive 3.23 grade point average this past spring. Incredibly, it is the 10th consecutive semester that Pride student-athletes have compiled at least a 3.00 GPA as a group.

“We are very proud to share the academic achievements of our student-athletes from the Spring 2017 semester,” commented Hofstra Vice President and Director of Athletics Jeffrey A. Hathaway. “It has been another great semester for our student-athletes, having collectively averaged over a 3.0 GPA including a record-high 3.3 during the fall semester. Special thanks to our coaches, staff and the Center for University Advising for supporting the academic efforts of our student-athletes. Congratulations to our scholar-athletes and thank you for your commitment to academic success while being outstanding representatives of Hofstra University.”

In terms of GPA, 13 of the 17 Pride teams had at least a 3.00 GPA in the spring. The tennis programs, led by Head Coach Jason Pasion, had the top team GPAs on both sides as women’s tennis led the women’s sports with a 3.68 GPA, while men’s tennis notched a 3.52 GPA to take the top spot on the men’s side.

Hofstra student-athletes have very diverse majors and are students in a multitude of schools within the University. Of the 316 Pride student-athletes, 121 are in the Hofstra College of Liberal Arts & Sciences, 118 are in the Frank G. Zarb School of Business and the remaining student-athletes are matriculating in the School of Health Professions & Human Services (40), the Fred DeMatteis School of Engineering & Applied Science (15), the Lawrence Herbert School of Communication (15), the Hofstra Northwell School of Graduate Nursing and Physician Assistant Studies (2) and the Maurice A. Deane School of Law (1).

In addition, Schoen finished her incredible academic career with a perfect 4.0 GPA, becoming the first Hofstra student-athlete to achieve that distinction since Joe Burg (baseball), who was the second Rhodes Scholar finalist in school history, in 2013.

Number One And Buffalo Bound
The Head Of The Class