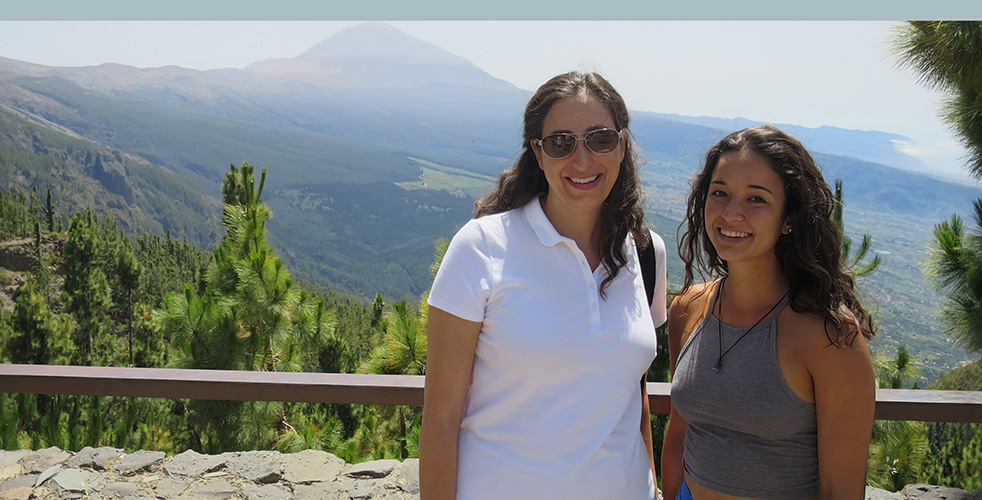 When Carmen Pestano ’17 presented the paper, “Crises and their Impact on the Governance of Immigration” at the European Union Studies Association (EUSA) 15th Biennial Conference this spring, she exhibited the poise and expertise of any other seasoned scholar on the program.

No one would have guessed she needed a little push from her professor and co-author Dr. Carolyn Dudek, chair of the Political Science Department.

“Originally Dr. Dudek said she would present half the paper and I would give half,” Pestano said. “But just a few days before she told me, ‘no, Carmen, you will present the whole thing.’ She has always encouraged me to do my very best, even when I think it’s too much for me. ‘Carmen, I know you can do it,’ she always says. She’s been a great friend and adviser to me.”

At graduation, Pestano would go on to win Hofstra’s Undergraduate Research Award for the paper.

Four years earlier, she came to Hofstra by way of the Canary Islands, a beautiful Spanish archipelago off the coast of northwest Africa. She was recruited to play on the tennis team and had declared a political science major before ever setting foot on campus.

Pestano says she was drawn to Hofstra by its proximity to Manhattan and the fact that the University had, at that time, hosted two presidential debates.

“Before coming here, I talked to one of my teammates who told me what the campus was like during the second debate when President Obama was on campus – the excitement, the helicopters flying over campus and what an amazing experience it was for all the students,” she said

Pestano added a European Studies minor to her political science major and found a mentor in Professor Dudek. “I just kept taking classes with her.”

Together they began formulating ideas for what would eventually become Pestano’s thesis project. They looked to Pestano’s home in the Canary Islands as well as the world’s refugee crisis for inspiration.

Their research focused on how crises can impact migration policy in the European Union.

“In particular, we examined the cayuco crisis [2006-2009], when over 30,000 West African irregular migrants arrived upon the shores of the Canary Islands in large fishing boats, called ‘cayucos.’” Dudek said.

“Similar to the current migrant crisis in Europe, the local and national authorities were overwhelmed and incapable of processing and absorbing so many migrants. As a result, the European Union was brought in to assist in securing Europe’s borders. Moreover, the current euro crisis and subsequent EU imposed budgeting constraints have adversely affected how the Spanish government and local authorities in the Canary Islands can manage irregular migration. We examine both of these crises and how they have re-shaped migration policy in the EU, Spain and the Canary Islands.”

To further their research, Pestano received a Firestone Fellowship, a $2,500 award granted by the Hofstra College of Liberal Arts and Sciences. The funds allowed  Pestano to travel to the Canary Islands with Dudek during the summer of 2016.

“Carmen and I interviewed academics who studied the cayuco crisis and have also established a non-governmental organization to integrate migrants into Canary society,” explained Dr. Dudek. “Carmen also interviewed journalists, workers of non-profits that assisted migrants during the crisis and a high ranking officer of the policing forces that worked with EU border enforcement.” 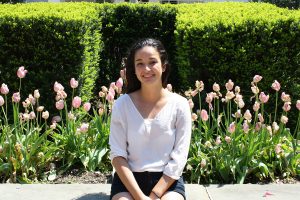 “Although I have traveled with students in a study abroad capacity, I had never traveled with a student to conduct field research. It was important to interview people that were present during the cayuco crisis to get a better sense of the challenges and magnitude of the massive influx of migrants. Doing interviews is a skill, and I think it was helpful for Carmen to have me attend some of the interviews so she could see the kinds of planned and unplanned questions I would ask. I am a Spanish speaker, but with Carmen’s Spanish abilities as a native speaker we were able to construct questions for each interviewee that were probing and useful for our study.”

As their paper progressed, Dr. Dudek proposed that they present their findings at the annual conference of the EUSA in May, the premier scholarly and professional organization focusing on the European Union. The EUSA awarded Pestano a $500 grant to defray costs associated with the conference.

Another memorable moment of Pestano’s senior year came in the fall just days before her return to campus from the Canary Island. “I found out Hofstra was hosting the presidential debate,” Pestano explains. “I was so excited.” Thousands of students entered a lottery for a ticket to attend the debate at the David S. Mack Conference and Exhibition Hall, and Pestano was one of the few hundred to win a seat at the first faceoff between candidates Donald Trump and Hillary Clinton on September 26. “It was a dream come true. I was sitting a few rows back from former President Bill Clinton and saw so many government officials.”

When asked what she will most miss about Hofstra, she says, “When I talk to my friends back home, they didn’t have opportunities like we have had here. Not just the debate, but the events that would happen almost every day – speakers, poets, writers, even the guy from Scandal [Joe Morton] – that was so interesting! You get to meet all of them and learn from them.”

Pestano, who was inducted into Phi Beta Kappa in April, also distinguished herself on the tennis team. Her 45 career singles victories rank fourth all-time and her 25 doubles wins with partner Sarah Bowen rank first on the career doubles wins list. She was a four-time Intercollegiate Tennis Association Scholar-Athlete.

She is continuing her focus on European Studies as she pursues her graduate studies at Sciences Po, an international research university in Paris.

“I am happy to say that we are working to publish our research, so our professional relationship has not ended,” Dudek said.

“Working with Carmen has been one of the most rewarding experiences I have had at Hofstra as both a researcher and educator. We both learned a great deal from this research project.”

Starry Night in DC
Protecting Terrapins and Their Eggs