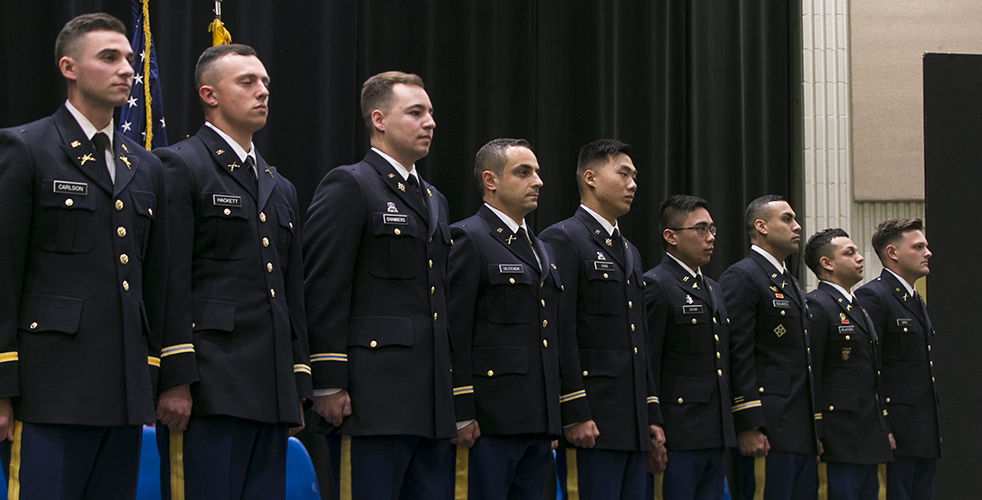 Nine seniors, including one Hofstra student, were commissioned as officers in the grade of Second Lieutenant (2LT) in the United States Army when Hofstra University’s Military Science Department celebrated its 2017 Spring Commissioning Ceremony at The Helene Fortunoff Theater in Monroe Lecture Center. Hofstra is a host university for the Senior Army ROTC Program on Long Island and for some additional area institutions.

The ROTC Cadets participated in moving traditions, including having their 2LT rank fastened on their uniform by spouses, parents and other family members and the Silver Dollar Salute. The latter symbolizes a welcome to service and to the profession of arms.

Speaking at the ceremony was LTC Daniel L. Cederman, chair of Hofstra’s Military Science Department, who is stepping down at the end of the semester to return to active duty. LTC Cederman was honored himself on May 13 with a 2017 Ellis Island Medal of Honor, alongside other distinguished honorees like Buzz Aldrin and Fareed Zakaria.

The afternoon’s guest speaker was Major General Daniel L. York, who currently serves as reserve advisor to NORAD/NORTHCOM at Peterson Air Force Base in Colorado Springs, CO. He urged the cadets to “be an example of what ‘right’ looks like” and – when carrying out their duties – to be “leaders, alert, loyal, and invested.”