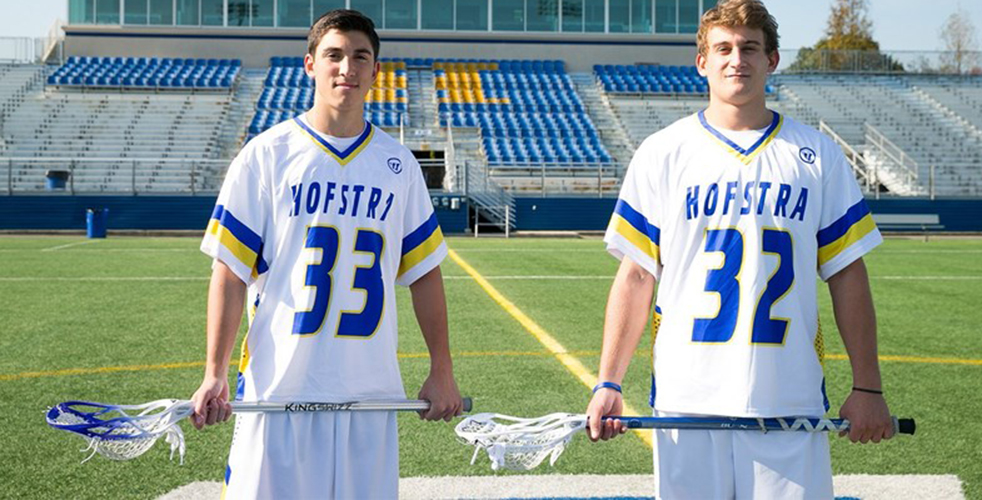 On any athletic team, there are usually a number of athletes whose talents and abilities are overshadowed by others in higher profile positions. These unsung heroes could be starters, back-ups or reserves in non-glamorous positions. But while their roles are sometimes unheralded, any coach will tell you that their duties are as important as the role of the star players.

Hofstra Men’s Lacrosse has a number of these key student-athletes who may not present the highest profile on the field but whose performances on a daily basis go a long way toward the success of the team. Two of those student-athletes, red-shirt junior Cole Considine and junior Matthew Perettine, are prime examples of ultimate team players, who willingly sacrifice their talents and egos to make their teammates better.

But for Considine and Perettine their stories are deeper than that as both may have been predestined to follow the steps that their respective fathers took in the 1980s as lifelong friends, classmates and teammates at Hofstra University.

The story of these two families begins in Farmingdale, Long Island when John Considine, Cole’s father, retired fireman and current equipment manager at Hofstra, and Anthony Perettine, Matt’s father, Executive Vice President at Signature Financial and currently the President of the Hofstra Athletics Pride Club, Hofstra Athletics fund-raising organization, befriended each other as grade schoolers. Like most kids on Long Island, sports filled their childhoods with Perettine playing baseball and basketball and Considine playing baseball, basketball, football and wrestling. When Considine was in the eighth grade, he added lacrosse and dropped baseball after being “worn out” as a pitcher.

The two friends attended Farmingdale High School where Perettine discovered lacrosse at Considine’s house one afternoon between their freshman and sophomore years while Considine was the old sage who started playing the sport in the eighth grade. They were part of three outstanding teams at Farmingdale that did not reach double-digits in combined total losses over their tenure. “My dad was a late bloomer in lacrosse,” Matt Perettine says proudly. “He was a baseball and basketball guy up until the beginning of high school and then he switched over to lacrosse. I don’t think that was a bad choice for him.”

The elder Considine and Perettine “boys” headed out to Hofstra after high school in that different era and different time of college lacrosse. “I am fairly certain that John and I were the first Farmingdale graduates to play lacrosse at Hofstra,” Anthony Perettine said.

Considine would start for the Pride-then the Flying Dutchmen-right from his first game until late in his senior year when he missed the last seven games with a shoulder injury. He played everywhere, midfield, face-off specialist, man-up and on defense. It didn’t matter to him. “I would walk out on the field at Hofstra with three sticks, a regular stick, a face-off stick and a pole,” Considine said. “I was comfortable being on the field and playing any position. I just wanted to be playing.”

Perettine would get off to a slow start as a freshman. He missed the first seven games due to a broken foot, before becoming a permanent fixture in the starting line-up until missing the last four games of his senior season with an injury. Along the way, he led the team in goals (26) and points (36) in 1984 and eclipsed the century mark in career points.

While neither received post-season honors, the lifelong friends each knew how important the other was to the team. “Tony didn’t get the respect as a player and a scorer that I think he deserved,” John Considine said. “He was a great player and a great scorer. I think he was one of the better players who came out of here during our time.”

Perettine returned the praise on Considine, “In my mind, John (Considine) was an All-American player who would do whatever it took to win.” The younger Considine heard the stories of how good and tough his father was but it didn’t come from at home. “My dad pretty much just told me that he played at Hofstra,” Cole Considine says. “But he didn’t go into much detail or brag about it. He’s not that kind of person.”

After college, the two would head out into the real world with Considine joining the New York City Fire Department in 1985 and Perettine embarking on a business career. They would start families, Considine with five children and Perettine with three. While they stayed in touch via the telephone, they seemed to talk more and see each other during a certain time of year. “”We talked a lot on the telephone but more so during lacrosse season,” John Considine said. “As our kids got older, we would take our families to games at Hofstra.”

While the families were close, despite the Considine family living in Rockville Centre and the Perettine family residing in West Islip, Cole and Matt hardly knew each other. “I remember seeing Matt at family parties growing up,” Cole recalls. “But even though I was just one year older than Matt, I remember gravitating more toward his brother.”

Those “family days” would have longtime effects on the two current members of the Pride. “Since I was about 10 years old I have been coming to Hofstra games,” Matt Perettine says. “Hofstra was a huge part of my childhood.”

When it came to looking at colleges, Matt and Cole must have felt the subliminal influences of their fathers. “Since my dad is an alum and because I grew up coming to Hofstra games, I started thinking about coming to the University,” Cole Considine said. “I visited Hofstra first and after talking to Coach Tierney, I decided that I wanted to come here. He made me feel that this was the right place for me.”

Meanwhile a year later in Suffolk Country, Matt Perettine was feeling the same way. “Early on I thought I wanted to get away,” the younger Perettine says. “But as I got closer to college it became evident that I really wanted to stay home on Long Island. I decided that Hofstra would be the right place for me to attend. Coach Tierney made it happen and I am thankful for that.”

While each student-athlete has seen some playing time over his tenure, the elder Perettine knows how to gauge his son’s feelings. “I do know that Matt and Cole are really proud and enjoy their time wearing the Hofstra colors and being part of the program. I ask Matt all the time, are we having fun and he responds, Dad, this is so cool.”

Hofstra Coach Seth Tierney knows the importance of having Perettine and Considine on the team. “No program is successful without having key players like Matt and Cole and others like them on their roster,” Tierney says. “They are selfless student-athletes who think about the team first before their own needs and wishes. They do everything that is needed to make both themselves and their teammates better prepared for what is ahead. They are the heart and foundation of our program.”

After a highly successful 2017 season that had an unfortunate ending, the two sons of Hofstra alums, despite the loss, are happy and looking forward to their final season in 2018. “I love the team, it’s like nothing that I have been part of before,” Cole Considine says. “In 2016 I saw a good amount of playing time but I switched to a new position (defensive midfielder) from attack this season. I hope that I can have a bigger impact to help our team but I will do whatever it takes to win the CAA title next year. That’s all I really want to end my career.”

Matt Perettine echoes the sentiments. “I have had an unbelievable experience at Hofstra,” he says. “This place is awesome. It’s been everything that I expected. I embrace my role and I know what my role is on this team. If it is being a starter, a reserve or a scout player then I am going to handle that role the best way that I can to make my teammates the best prepared they can be for each and every game. I am excited about next season.”

The Head Of The Class
NCAA Lacrosse Quarterfinals On Saturday