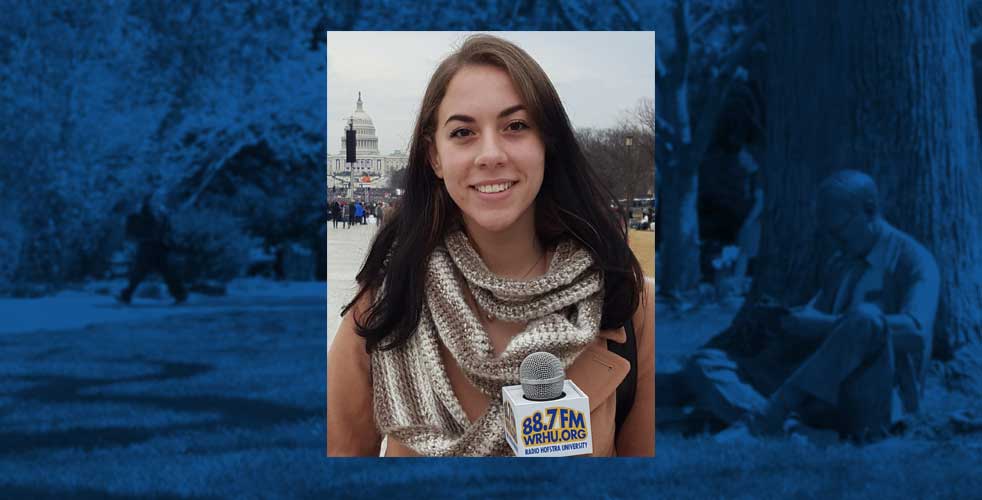 Maria Santana, a sophomore television production and studies major, has won two Communicator Awards of Distinction from the Academy of Interactive and Visual Arts for her work on WRHU 88.7 FM Radio Hofstra University, where she is station manager.

She was honored for both sound design and news production on the feature, BroadwayCon, a look at a New York City conference this year that celebrated Broadway musicals and plays.

“It’s an absolute honor to win these awards,” said Santana, of Freehold, New Jersey. “I never imagined two years ago that I would get to create and be a part of so many amazing projects! Hofstra has provided me with many amazing resources that have gotten me to where I am today.”

In January, Santana was one of four WRHU student journalists to report from the presidential inauguration and Women’s March in Washington, DC.  In May, she won first place in a competition sponsored by the Hofstra Radio Alumni Association.  She was also named a finalist in the Press Club of Long Island awards, which will be announced June 7th, for her work as a co-host of a show on education issues that aired during WRHU’s coverage of the presidential debate between Donald Trump and Hillary Clinton, held on Hofstra’s campus on Sept. 26, 2016.

“Maria is a talented reporter who does an excellent job as station manager,” said WRHU Operations Manager John Mullen.  “It is great to see her receive national recognition for her on-air work.”

This fall, in addition to her responsibilities at WRHU, Santana will serve as the associate general manager of HEAT (Hofstra Entertainment Access Television), a student-run TV network on campus.

The 23rd annual Communicator Awards is the largest and most competitive awards program honoring creative excellence for communications professionals, with more than 6000 entries from the U.S. and around the world.  The awards are judged and overseen by the Academy of Interactive and Visual Arts, a 600+ member organization of industry professionals.

WRHU is Hofstra’s award-winning student-run radio station, with studios in the Lawrence Herbert School of Communication. It was named non-commercial radio station of the year by the National Association of Broadcasters in the prestigious Marconi Awards competition in 2014, and was ranked the best college radio station in the nation by the Princeton Review for 2015 and 2016.  WRHU’s student reporters have won honors from the New York State Associated Press Association, the Press Club of Long Island, the Society of Professional Journalists, Alliance for Women in Media Foundation, and New York Women in Communications, among others.

At the Movies
Bright Minds