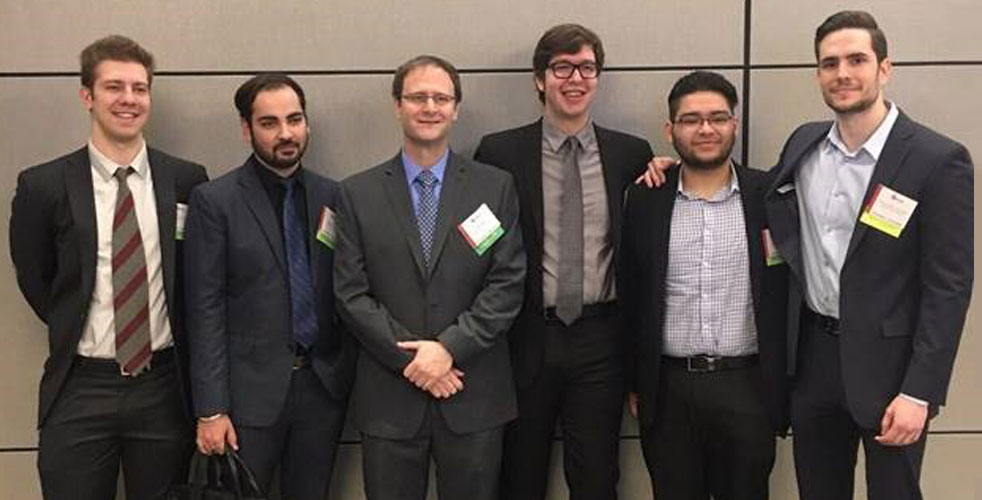 Computer engineering students Jorge Contreras ‘17 and Patrick Rygula ‘17, computer engineering students Vividh Talwar ‘18 and Alexander Speicher ‘18 and industrial engineering student Kylan Duff ‘17 presented “Democratizing Data Centers: Virtualized Decentralized Data Centers Using Blockchain Technology and Smart Contracts” which proposed  virtualizing data centers using blockchain technology. Blockchain is an underlying technology in Bitcoin that allows for a secure and distributed digital ledger to store information. This was used to create an incentive-based system using smart contracts that would open the door for virtually any computer owner to earn money by renting out their computers to data centers similar to how drivers can “rent” out their car as a taxi through Uber.  Existing data center operators benefit by being able to expand their computer capabilities at a lower cost.

The students have been invited to present their research at a technology conference in Boston.

This was Hofstra’s first year participating in the competition, hosted by the 7×24 Exchange Metro New York Chapter.  Oren Segal, assistant professor of computer science, mentored the team.  He said, “It was a pleasure to work with such a group of talented and dedicated young people. Early on, when the team was brainstorming for an idea they decided to shy away from conventional solutions and set out to transform the way we look at data centers. Judging from the reactions to their work they managed to do so.”

Senior Jorge Contreras said he learned a lot from the competition.

“I had a wonderful opportunity to practice programming and blockchain technologies,” he said. “The project allowed us to actually use what we have been learning for the last couple of years and to compete, which was a lot of hard work but a lot of fun. The ability to present added another layer to the experience because I had to teach a large group about my research.”

Judging was conducted electronically by 7×24 Exchange membership.  Manhattan College, the first place winning team received $10,000 and all other participating universities received a prize of $1,000 each.

The 7×24 Exchange Metro New York Chapter is a not-for-profit organization that provides an educational forum for data center and information technology professionals responsible for the maintenance of computer servers that store, process, and distribute large amounts of critical data.  Members include firms within the aerospace, energy, financial services, government, healthcare, pharmaceuticals, manufacturing, media and technology industries.