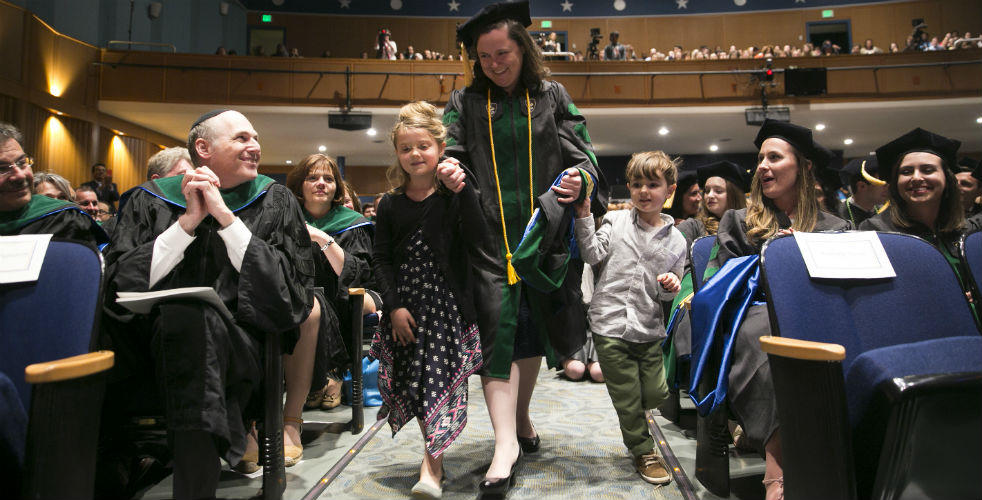 They can call her Doctor Mom now.

With her two young children by her side, single mother Patricia Driscoll of East Hills graduated from Hofstra Northwell School of Medicine this week, one of 74 members of the Class of 2017 who joined the ranks of the nation’s newest doctors.

“I started out in data science research, but as I got further along in my career, it became more important to honor my commitment to social justice,” said Dr. Driscoll, 40, conferred a degree in medicine and one of 12 members of her class to be elected to the Gold Humanism Honor Society as exemplars of compassionate patient care. “I’m so grateful to be able to share this moment with my kids.”

In all, two PhDs and 72 MDs were celebrated at a commencement ceremony held at John Cranford Adams Playhouse.

“The valuable training that happens here at Hofstra [Northwell] is being copied by the major universities in the country,” said Dr. Dean, who earned a medical degree from Albert Einstein School of Medicine before entering politics. “You are in the middle of tremendous change without even realizing it.”

Hofstra Northwell’s third graduating class raised the bar in diversity with the school’s largest number of African-American and Latino students entering medicine and residencies at top-choice programs throughout the country. The inspiring group of men and women also includes the school’s first naval graduate. In July, these newly minted physicians will begin the next phase of their training within leading institutions such as Stanford University, Baylor College of Medicine, Vanderbilt University, Yale University, and Brigham and Women’s Hospital (Harvard University). More than half will remain in the eastern region for residency, including over 20% at Northwell, while others journey to major centers across the United States.

“I’m heading to the Bronx for a residency in primary care and social internal medicine at Einstein-Montefiore,” said Dr. Driscoll flanked by daughter Nina, 6, and son, Teo, 5, throughout the graduation ceremony, including the official presentation of her degree. “We’re ready to get started.”