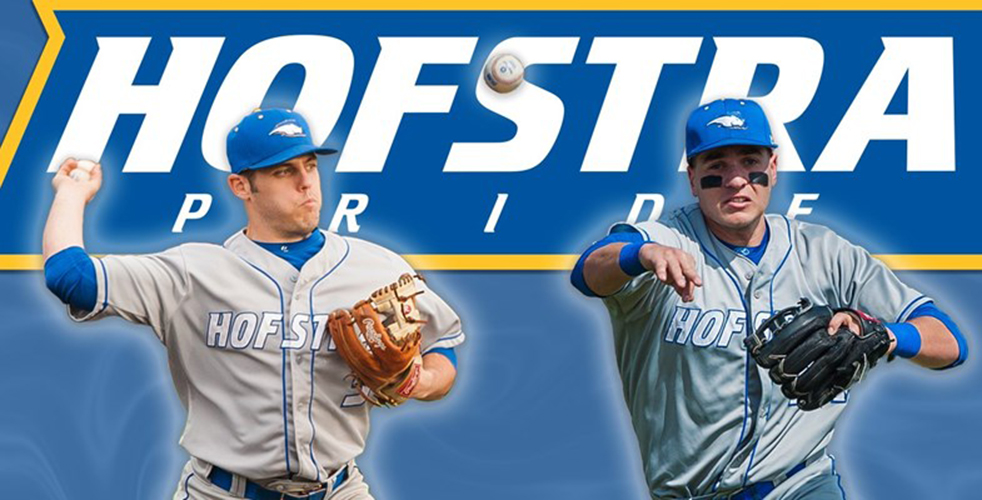 As the number of games remaining in the 2017 season starts to dwindle, two of the steadiest careers in Hofstra Baseball history will come to a close as David Leiderman and Brad Witkowski will cease sharing the infield together after doing so since the 2014 season.

Leiderman and Witkowski have been fixtures in the Hofstra lineup with Leiderman having played in 183 games and Witkowski 162 entering this weekend’s series against Elon. While the end may be in sight for both, neither student-athlete is ready to accept the finality of it all.

“I don’t think the fact that I am coming to the end of my college career has set in yet,” said Leiderman. “I think that on the last road trip with the guys (next week at James Madison), it will hit me. It is kind of hard to think that this could be the last time I will be playing baseball.”

Witkowski is even more matter-of-fact about the prospects of playing his final collegiate games. “It is tough for anybody to have their playing career come to an end,” said the senior from Lindenhurst, New York. “But you have to go out there and appreciate what’s left and try to end the season the right way. I plan to take it game-by-game and just appreciate each moment. We are still alive in the playoff race and the goal right now is to make the Colonial Athletic Association Championship for the first time in our tenure.”

Having been teammates for four years, the two have created a bond that will carry on long after they hang up their cleats for the last time. “Playing with David has been great,” said Witkowski. “We have had a lot of good times together and have great memories. We had the opportunity to lock down the left side of the infield together last year and then after Mikey’s (Riesner) injury this year, I am back at short. So it is kind of fitting that we will end our careers on the same side of the infield again.”

“Playing with Brad has been great as well,” Leiderman said. “He came in as a quiet kid and I wasn’t sure how we would get along. But he has become one of my closest friends and is someone that I will remain friends with from here on out.”

The pair has also been remarkably consistent throughout their careers. Witkowski, who was a CAA All-Rookie pick, has a career average hovering right around the .300 mark and has never hit below .289 in a season. Leiderman has a .266 career average, but the Merrick, New York, native has not hit below .270 since his red-shirt freshman campaign in 2014 and was an All-CAA selection in 2016.  Both players started the 2017 season off on the slow side, but both handled their slumps like the veterans they are and are now close to their career numbers with nine games left in the regular season.

“I think that if I was in my freshman shoes right now I would still be struggling because I would not have been able to handle the early season failure,” said Leiderman. “But since I have been there before, I was able to not let it carry over from game-to-game. I just went at-bat to at-bat, found a swing that was working and I have been sticking with it.”

Witkowski took a more philosophical approach to his early season struggles, saying, “You know the phrase ‘it’s not how you start, it is how you finish’, that is how I look at it every season. I seem to always start slow, but once the nicer weather starts to arrive here in New York I hit a stretch where I get hot. This year was no different.”

Hofstra Coach John Russo also didn’t panic over the slow start by his seniors. “David and Brad have proven themselves on multiple occasions. Even when the hits weren’t falling for them, I thought they both were having some pretty good at-bats and I never doubted that they would start to produce.”

Coach Russo also credited the work ethic of the two seniors for their ability to have success at the plate year after year. “Both Brad and David work hard and play the game the way it was meant to be played. Their success is by design and not by accident.”

Both Witkowski and Leiderman stated that being self-driven was a major factor in their playing careers. “I think it (consistency in performance) comes from going about your business in the offseason,” said Leiderman. “You have to have determination to work as hard as you can so that when the season comes around you can perform up to the expectations that you have set for yourself.” Witkowski concurred with Leiderman’s assessment adding, “I think it is up to the player to make the best of their career.”

Witkowski was also quick to praise Coach Russo and his staff in helping with their improvement and their Hofstra experience. “I think our coaches are always there for us and there are always options for extra batting practice. Coach Russo has always had a strong belief in me and David, and I think that is why we both came here instead of going to one of the other programs that were recruiting us.”

In addition to their production on the field, both players have also assumed leadership roles on the team being the two most experienced upperclassmen. “With all of the young guys, you have a lot of people looking up to you,” Leiderman explained. “I don’t feel any pressure in being viewed as a leader. I think it is exciting to come to the park every day and know that you are one of the older guys who have been here for a while. The younger guys come up and ask you questions and they watch how you go about your business on the field and they feed off of that so I enjoy it.”

While both Leiderman and Witkowski hope to create a final memory of playing in the CAA Championship this season, the pair has many others that they can look back on. When pressed to pick one or two favorites, Witkowski chose to go with opening the 2015 season at UCLA and continuing on to Hawaii for five games. Leiderman went with his outstanding performance in 2016 against the College of Charleston in a sweep against the then-first-place Cougars. “Hitting the walk-off home run and having that picture is something I will be able to share with my children years from now,” he said. “That may be the best on-field memory, but the number of teammates and friendships I have formed over the last five years are amazing.”

“I would love to keep playing baseball, it has been my dream, and if that works out it would mean the world to me and my family,” said Leiderman. “If baseball does not work out, I would love to get into the family business and work with my father and sister. I have never really been able to work closely with them due to playing baseball, so it would be awesome to work with them everyday and make our relationship stronger.”

Whatever happens over these next nine games, nothing will change what Leiderman and Witkowski have meant to the Hofstra program and both will be missed. “David and Brad are both ultimate team players,” said Coach Russo. “They would do anything to help the team and it will be strange not writing their names on the lineup card next season.”

All-Stars In The Classroom
Sister Pride