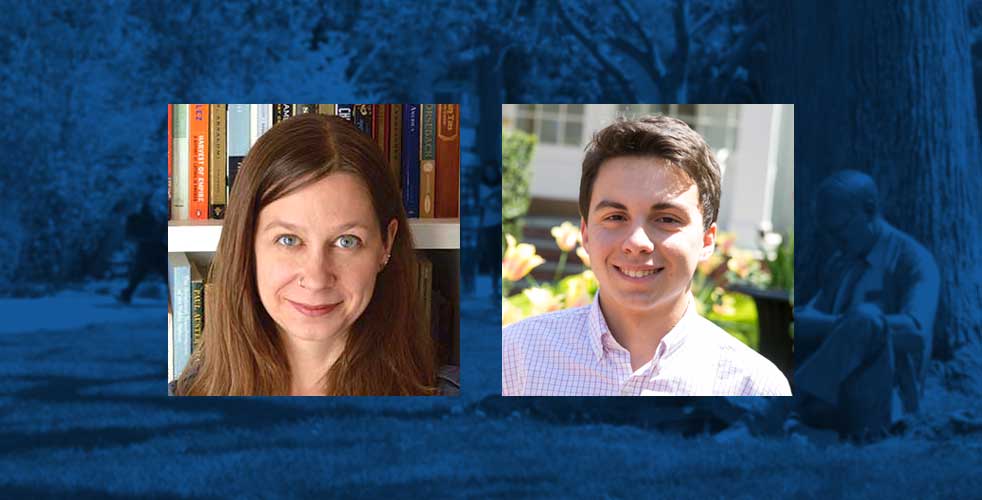 A history professor who will conduct research in Latin America about women’s soccer and a senior who will spend 10 months teaching English in Germany have won 2018 Fulbright Grants.

Brenda Elsey, PhD, associate professor of history and co-director for Latin American and Caribbean Studies, won for her research on the history of gender, sexuality, and sport in Latin America.  In Argentina, she will focus on the history of women’s soccer, from the 1930s until present. Professor Elsey will teach a course at the National University of La Plata (UNLP) on the social history of sport in the Americas and work with history, journalism, and physical education students.

Honors College student Kevin Patalano, a German and marketing major, will be a Fulbright English Teaching Assistant (ETA) at a school in Schleswig-Holstein, a northern state on the border with Denmark between the Baltics and the North Sea, where he will work in the classroom, school and community, helping students and others learn about the U.S. and improve their English language skills.

“Winning a Fulbright Grant is an extraordinary accomplishment that speaks to the quality of our faculty and students, and about the scholarship and intellectual curiosity that drives them,” said Provost and Senior Vice President for Academic Affairs Gail Simmons. “The international exchange and study that the Fulbright Program supports is more important than ever.”

Dr. Elsey’s current work focuses on the 1971 Argentine national women’s team that competed at the second women’s world football championships held in Mexico. Professor Elsey will conduct archival and ethnographic research in La Plata, where most of the players lived. She is also collaborating in public history projects that the players have started.

The case of the 1971 Argentine team is built upon the little known social history of women’s participation in soccer. Given the popularity of the sport in Argentina and its centrality to national identity, women’s extreme marginalization from the sport has contributed to broader social inequalities, within local politics and labor unions.  Following Argentina’s brief moment of glory in 1971, women’s football declined markedly in the 1970s and 80s. When it resurfaced in the 1990s, it was through top-down patronage from large clubs such as River Plate and Boca Juniors. The history of conflicts within soccer reflected the intensity of debates over proper gender roles and the extreme segregation of particular social spaces.

Dr. Elsey said, “I am excited for this opportunity to create stronger connections to researchers and players in Argentina as I work on this project. Their expertise is indispensable, and I am grateful to the UNLP for hosting me. I hope to be of service to the women as they reflect on their experiences within the underground and transnational communities of women’s soccer, as well as the violence they faced on and off the field. I also look forward to teaching in a distinct environment and look forward to collaborations with students and colleagues at UNLP.”

“Dr. Elsey is a pivotal member of our department: a dynamic teacher, a skilled administrator, and a highly productive scholar,” said History Department Chair Simon Doubleday. “A Fulbright will be a stepping stone to even greater professional success for her.”

Dr. Elsey’s additional writing credits include Citizens and Sportsmen: Fútbol and Politics in Twentieth Century Chile, the forthcoming Futbolera: Women and Sport in Latin America (with Joshua Nadel), and several articles in academic journals. She also recently edited a special issue of Duke University Press’s, Radical History Review on “Historicizing the Politics and Pleasure of Sports,” with Peter Alegi.  In 2015 she covered the Women’s World Cup for Sports Illustrated.

Kevin Patalano grew up in Garden City, NY and credits a neighbor whose family often visited from Germany with sparking his interest in the language.

“We got to know the family and so when it came time to pick a language in middle school, I picked German because it was familiar,” Patalano said. “I stuck with it through middle and high school and into college.”

Patalano has spent the last two summers in Germany. He won a competitive scholarship from the German Academic Exchange Service to study advanced German in Munich after his sophomore year, and last summer, he had a marketing internship at an electrical engineering firm near Dusseldorf.

“Kevin has a deep interest in, and love of, German culture,” said Neil H. Donahue, Vice Provost for Undergraduate Academic Affairs and Fulbright Program Adviser and Patalano’s Advanced German professor for the last five semesters. Donahue and Gioia Bales, senior associate dean at the Frank G. Zarb School of Business, were key in helping Patalano prepare his Fulbright application. “A Fulbright Grant is a life-changing experience.”

Patalano is also no stranger to teaching, or community service. He is president of Hofstra’s chapter of Habitat for Humanity, has spent part of his summers working at Hofstra summer camps, and spent four years as an English language Program tutor for international students.

“I had a lot of fun working with kids, and I really liked helping people with their language skills, so the English teaching assistantship Fulbright seemed like a perfect fit for me,” he said. “I hope I can leave an impression on the kids. I hope they can look back and say ‘oh yeah, we really enjoyed our year with the American who came and worked with us,’”

After his Fulbright teaching assistantship is complete, he hopes to find a job at a bank, working in the marketing side of finance.

“During my four years, Hofstra gave me opportunities to grow as a leader and get involved with stuff I never thought I would get involved in,” he said. “I was able to take on a lot of responsibility and do a lot of meaningful things outside the classroom and it all came together to lead me to the Fulbright.”

The highly selective and competitive Fulbright scholarship supports a year doing research or working as a teaching assistant abroad. The application process is demanding, but Fulbright Program Adviser and Vice Provost Neil H. Donahue provides regular informational sessions and constructive assistance throughout the application process. For more information, go to https://us.fulbrightonline.org/. Contact contact Vice Provost Donahue to discuss your interest and how to prepare for a successful application.