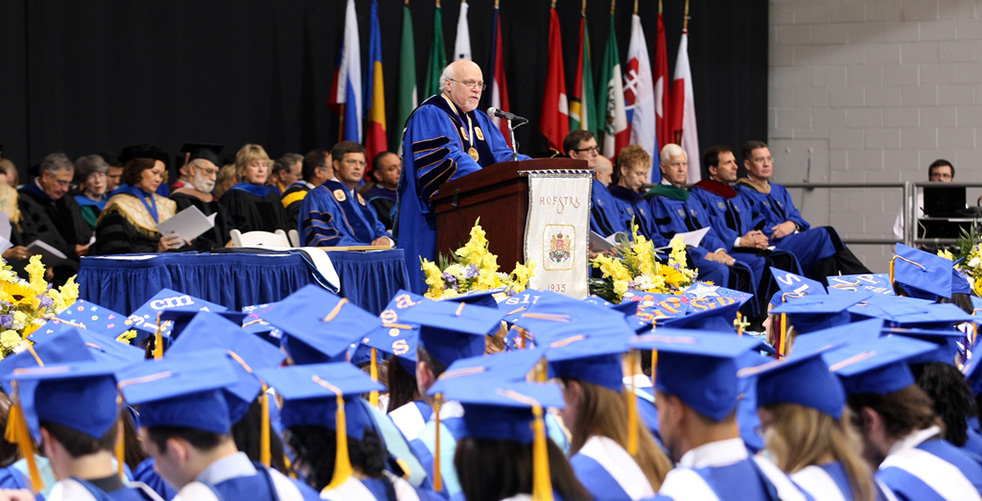 Hofstra University will celebrate its spring commencement activities on Sunday and Monday, May 21-22, 2017. Approximately 2,100 undergraduate, graduate and law students will celebrate the completion of their studies during four separate graduation exercises.

All ceremonies will take place at the David S. Mack Sports and Exhibition Complex, located on Hofstra’s North Campus. There will also be live webcasts of each of the ceremonies. 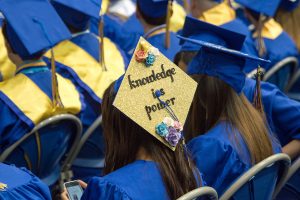 9 a.m. Undergraduate Ceremony for Hofstra College of Liberal Arts and Sciences and the School of Health Professions and Human Services featuring Mariko Silver, president of Bennington College. Dr. Silver previously served in the Obama administration as acting assistant secretary for international affairs and deputy assistant secretary for international policy for the U.S. Department of Homeland Security.

5 p.m. Graduate Ceremony (all schools), featuring Dr. Jill Biden, lifelong educator and Second Lady of the United States from 2009 to 2017. With the February 2017 launch of the Biden Foundation, Jill Biden and her husband, former Vice President Joe Biden, are continuing their commitment to strengthening the middle class, protecting women and children against violence, and supporting community colleges and military families.

More about the honorees

Mariko Silver, president of Bennington College, previously served in the Obama administration as acting assistant secretary for international affairs and deputy assistant secretary for international policy for the U.S. Department of Homeland Security, where she spearheaded the creation of the first department-wide international strategy, managed the department’s international engagements, and co-developed a global initiative to enhance aviation security. Prior to that, she served as policy advisor to Arizona Governor Janet Napolitano, with responsibility for the state’s public and private universities, community colleges and vocational institutions; the Arizona Department of Commerce; and Science Foundation Arizona.

As senior advisor to Arizona State University (ASU) President Michael Crow, Mariko Silver was a key strategist in what Newsweek called “one of the most radical redesigns in higher learning since the origins of the modern university.” Ms. Silver designed and led international and community initiatives focused on economic development, interdisciplinary science initiatives, and student success. She also served as professor of practice in ASU’s School of Politics and Global Studies and established international research and teaching partnerships, including the international University Design Consortium.

Since 1989, Stanley M. Bergman has been chairman of the board and CEO of Henry Schein, Inc., a Fortune 500® company and the world’s largest provider of health care products and services to office-based dental, animal health and medical practitioners, with more than 19,000 Team Schein Members (TSMs) and operations or affiliates in 33 countries. Henry Schein, Inc. is a member of the S&P 500® and NASDAQ-100® indexes.

Mr. Bergman serves as a board member or adviser for numerous institutions, including New York University College of Dentistry; University of Pennsylvania School of Dental Medicine; Columbia University Medical Center; Hebrew University; Tel Aviv University; The University of the Witwatersrand Fund, Inc.; The World Economic Forum’s Health Care Governors; Business Council for International Understanding; Japan Society; and The Metropolitan Opera. Mr. Bergman is an honorary member of the American Dental Association and the Alpha Omega International Dental Fraternity. He has been the recipient of many awards and recognitions, including the Ellis Island Medal of Honor; the CR Magazine Corporate Responsibility Lifetime Achievement Award; an honorary doctorate in commerce from The University of the Witwatersrand, Johannesburg; honorary doctorates from both A.T. Still University’s Arizona School of Dentistry and Oral Health and Case Western Reserve University; and honorary fellowships from King’s College London – Dental Institute and the International College of Dentists.

Jill Biden served as Second Lady of the United States from 2009 to January 2017. With the February 2017 launch of the Biden Foundation, Dr. Biden and her husband, former Vice President Joe Biden, will continue their commitment to strengthening the middle class, protecting women and children against violence, and supporting community colleges and military families.

During her time as Second Lady, Dr. Biden worked to bring attention to the sacrifices made by military families, to highlight the importance of community colleges to America’s future, and to raise awareness around areas of particular importance to women, including breast cancer prevention, all while continuing to teach as a full-time English professor at a community college in Northern Virginia.

Dr. Biden’s children’s book – Don’t Forget, God Bless Our Troops – was released in June 2012. Inspired by real-life events, the book tells the story of a military family’s experience with deployment through the eyes of Dr. Biden’s granddaughter, Natalie. The book includes resources about what readers can do to support military service members and their families.

In 1993, after four of her friends were diagnosed with breast cancer, Dr. Biden started the Biden Breast Health Initiative in Delaware, which has educated more than 10,000 high school girls about the importance of early detection of breast cancer. Dr. Biden and Joe Biden have also served as the honorary co-chairs for the Global Race for the Cure in Washington, D.C.

Prior to moving to Washington, D.C., Dr. Biden taught English at a community college in Delaware, at a public high school and at a psychiatric hospital for adolescents. Dr. Biden earned a doctorate in education from the University of Delaware in January of 2007.

DA Singas has focused efforts on combating drug and gun trafficking, violent gangs and sexual assaults. She began her career as an assistant district attorney in Queens, working her way through the ranks prosecuting murderers, batterers, and other violent criminals. In 2006 she joined the Nassau County District Attorney’s Office as chief of Nassau’s newly created Special Victims Bureau, bringing her expertise to serve the most vulnerable victims – children, the elderly, and victims of domestic and sexual abuse.  She was appointed

chief assistant district attorney in 2011, and worked to design and implement specialized programs for adolescent offenders, veterans, and those who suffer from mental illness or drug addiction. 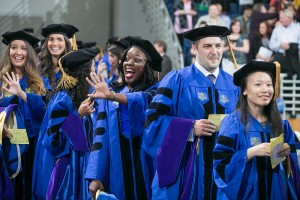 Undergraduate Ceremonies:  Seating for the undergraduate ceremonies is limited due to the size of the David S. Mack Sports and Exhibition Complex. Each spring undergraduate receives 6 assigned seat tickets. Requests for additional tickets can be obtained by placing your name on a lottery list during robe distribution, on Wednesday or Thursday, May 17 and May 18, 2017, between the hours of 10 a.m.-8 p.m. in the lower level of the Bookstore at the Mack Student Center.

Lottery winners will be notified via their pride account beginning Friday, May 19, 2017 at 10 a.m.

Lottery winners must either respond to the email that they will take the extra tickets. If there is no response within 2 hours, the tickets will be awarded to the next person on the lottery list.  All tickets must be picked up by the requesting student at the reception desk located in the David S. Mack Student Center, room 112 by 5 p.m. on Friday, May 19, 2017 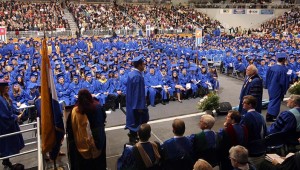 For additional information on commencement activities, such as eligibility, robing and diplomas, please visit hofstra.edu/commencement    or call the Commencement office at (516) 463-4346. In the event of a severe weather event, please call the weather hotline (516) 463-SNOW regarding the status of the ceremony.