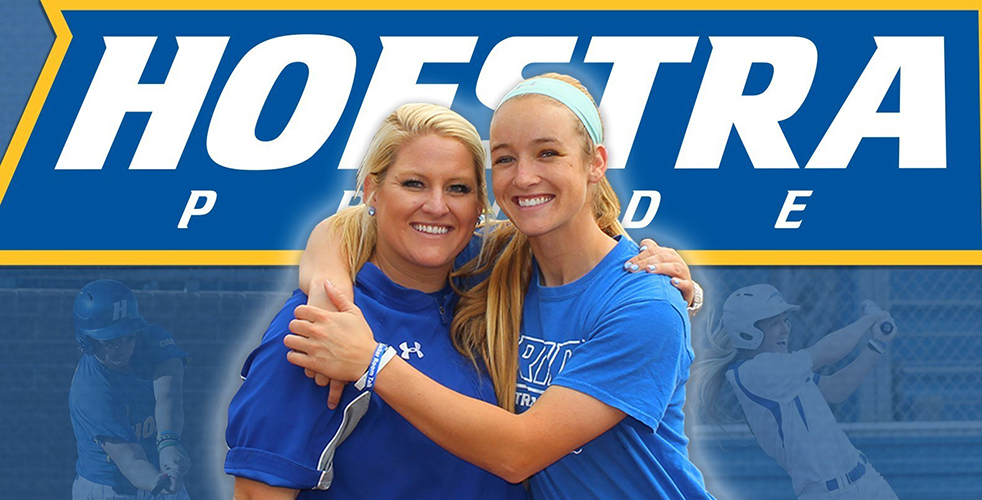 To understand the bond between Hofstra Softball junior Nikki Michalowski and her sister, Assistant Coach Sara Michalowski, look no further than the number on the back of Nikki’s jersey.

No. 11. The number Sara wore when she played at Hofstra from 2008-11, winning two Colonial Athletic Association Championships, advancing to two NCAA Regionals and earning CAA Player of the Year in 2011.

“I told [Nikki], ‘You don’t need to take my number. You don’t need to be the same number as me,'” Sara said of Nikki’s decision when she first arrived at Hofstra. “So when she called me to tell me she took No. 11, I just lost it. It just meant so much to me that she even would think about doing something like that.”

Sara and Nikki are two of five Michalowski siblings – Sara is the middle, with two older brothers, while Nikki is the youngest, separated from Sara by seven years and another sister. Growing up, their parents were constantly carting them all off to various sporting events. Sara remembers going to Nikki’s softball games when she was young, with Nikki playing in competitive tournaments by the age of eight, but Sara laughs that, as a high schooler, she wasn’t paying much attention to her baby sister.

“It was really when I got into college that we developed a really good relationship,” said Sara. “I was coming home and bringing all the knowledge I was learning and giving it to her.”

As a kid, Nikki would attend Sara’s college games with her face painted Hofstra blue and gold. “I remember Nikki being in the stands when she was 11 years old and just idolizing her sister,” said Hofstra Softball Head Coach Larissa Anderson. “I think it’s really neat to see Nikki grow up after knowing her from such a young age and now seeing her wearing her sister’s number.”

Nikki’s gesture of choosing to wear No. 11 meant even more to Sara because she knew Nikki had been hesitant to come to Hofstra at all. Initially, Nikki was tentative about the idea of following in her sister’s footsteps, simply because she wanted to pave her own path. But Nikki’s official recruiting visit to Hofstra made her mind up quickly. “She went through the whole recruiting process, and she knew my experience and she knew the coaches and she was coming to camp and she knew what she wanted,” said Sara. “She did go to other visits, and it wasn’t anything she wanted. So when she came here and [former Hofstra Softball Head Coach Bill Edwards] was here, he sat down with her and was like, ‘You are not your sister. You are your own person.'”

Nikki agreed that the Hofstra coaching staff made her decision clear right away, adding: “I knew their philosophies and the way that the coaches took a softball player and turned them into the best athlete and person they could possibly be. I mean, I watched it happen to my sister before my eyes. What more could I possibly want?”

And Nikki was quick to establish herself with the Pride, having a breakout sophomore season in 2016, finishing with a .311 batting average and eight home runs, tied for second on the team. She was named to the All-CAA Second Team and National Fastpitch Coaches Association All-Northeast Region Third Team for her achievements.

With a vacancy on the coaching staff following that season, Anderson looked to the program’s alumnae. “I wanted an alum who understands the dedication and the commitment of our student-athletes,” said Anderson. “Sara’s paid her dues. She’s coached high school, she’s coached travel ball, making peanuts. Someone who understands the profession and paying your dues and working your way up and is doing it for the right reasons is someone I want in the program.”

But Anderson and Sara were both concerned first and foremost with Nikki’s comfort level of adding Sara to the staff.

“When I was interested in Sara being the assistant, before I even addressed it to Sara, I immediately went to Nikki first, and I asked her, ‘Are you okay with this?”’ said Anderson.

Sara added: “I was more concerned about how [Nikki] would feel about it. Because I had my experience [at Hofstra] and I got to experience it kind of by myself, and even though we are close, I didn’t want to step on her toes.”

But Nikki was enthusiastic at the prospect of having her sister on the sidelines. “When I addressed it with Nikki, saying I wanted to bring Sara back, she was so excited for her because [Sara has] wanted to coach in college for a long time,” said Anderson.

So Sara came on board in September 2016. “When the opportunity came, it was a no-brainer,” she said. “It’s just everything I’ve ever wanted. It’s my dream job.”

Since then, the Michalowskis have helped the Pride to a 23-17 overall record and 9-4 mark in CAA play so far this season, with Hofstra currently riding a nine-game win streak. Nikki has seen time in both the infield and outfield, with her defensive versatility making her an invaluable asset to the Pride. She’s been strong at the plate as well, batting .267 with five doubles, a triple, three home runs and 17 RBIs. She has hits in her past five games and has racked up seven RBIs over that span.

“Having my sister as a coach has been nothing short of amazing,” said Nikki. “On the field, I respect her as a coach and she respects me as a player. Off of the field, nothing changes about our sister relationship. We have so many things that we get along about aside from softball, and it’s so much easier to balance than anyone would think because we have always had that coach/player relationship on the field since we’re seven years apart, and I’ve always desired to learn from her on the field.”

With just seven games remaining in the regular season, the Michalowskis hope to help the Pride continue to reach new heights, and the culture of Hofstra Softball runs deep with both of them.

“My personal goals for the rest of this season and the rest of my career here at Hofstra is to be the best teammate I can possibly be,” said Nikki. “People will forget batting averages, plays made, et cetera, but no one will forget what kind of teammate and person you were. I want to help my team reach our highest potential and push every single one of my teammates to be the best they can be.”