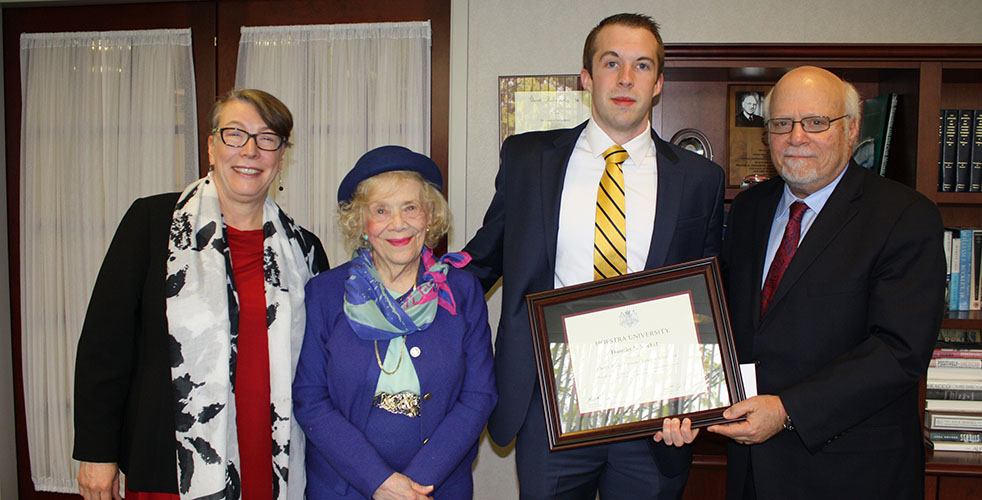 Hofstra graduate and Westbury resident Timothy Michel ‘15 has been named a recipient of the Albert I. DaSilva Memorial Endowed Scholarship for achieving a 4.0 G.P.A. while he earned degrees in criminology and Spanish. He is hoping to pursue a career in law enforcement.

The late Mr. Albert DaSilva was a noted entertainment lawyer. His wife, Dr. Zenia DaSilva, was a professor of Romance Languages and Literature at Hofstra. She has the distinction of being Hofstra’s longest-serving faculty member. Though now retired, she taught at Hofstra for 54 years. In fact, Michel was one of her students.

“My positive experiences with the people and institutions of Nassau County instilled in me a desire to give back to the community and become a Nassau County police officer,” said Michel. He has completed the screening process for the Police Academy, and until he begins training he is working part time as a security consultant.

On April 24, 2017, Dr. DaSilva, Hofstra President Stuart Rabinowitz, and Provost and Senior Vice President for Academic Affairs Gail Simmons, met with Michel. Dr. DaSilva talked to him about her and her husband’s shared commitment to education, the humanities and to helping young people achieve their professional and academic goals. Michel may apply the scholarship toward his future academic or professional endeavors.

My Journey: Humans of Hofstra with Annik Spencer
Bright Ideas