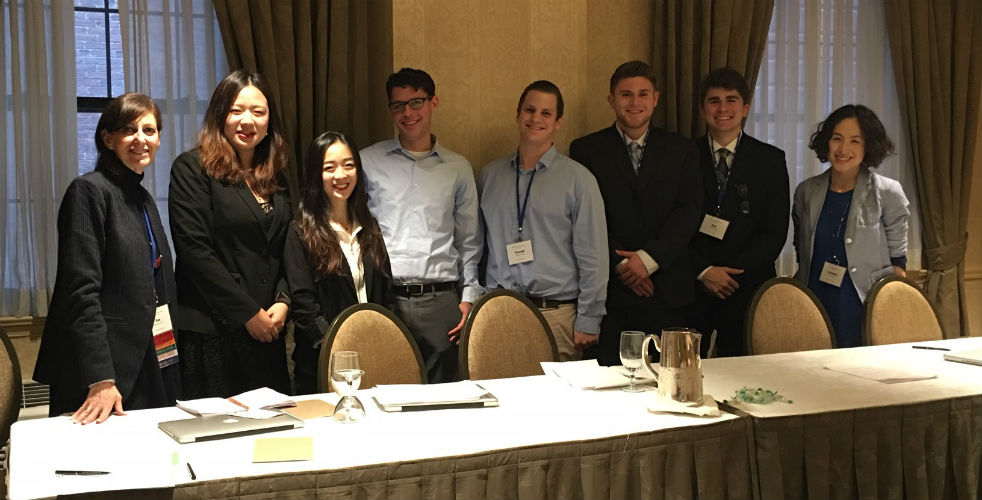 Students and faculty from the Department of Journalism, Media Studies and Public Relations in the Lawrence Herbert School of Communication recently presented original research and served as panelists during the Eastern Communication Association (ECA) annual conference in Boston.

Six students presented research projects during a panel entitled “Urban Communication in Contexts: Space, Place, Social Media and the 2016 Presidential Election.”   The session examined multiple perspectives on how physical location and social media shaped the 2016 presidential election and the impact social media had on America’s current media landscape. The students and projects included:

“The quality of our students’ research was outstanding and exceeded expectations for undergraduates,” said Professor Susan Drucker, JD who chaired the session and also serves as the ECA’s legal counsel and a member of its executive committee.  “I was so impressed by how professional and poised they were during their presentations.”

Professors Susan Drucker, Jeff Morosoff, Joseph Peyronnin and Jingsi Wu also served on a panel examining the educational and professional opportunities for students and faculty on campuses that host presidential debates.   Hofstra University has hosted three consecutive debates in election cycle years – with its most recent being the first debate between Donald Trump and Hillary Clinton in 2016. The professors discussed how they incorporated lesson plans about the debate into their curriculum as well as their experiences serving as faculty experts for news outlets and media organizations from around the world.

The ECA convention, held this year from March 29-April 2, featured some of the best original research from the nation’s top communication students and professionals.   Established in 1910, it is the oldest professional communication association in the United States.