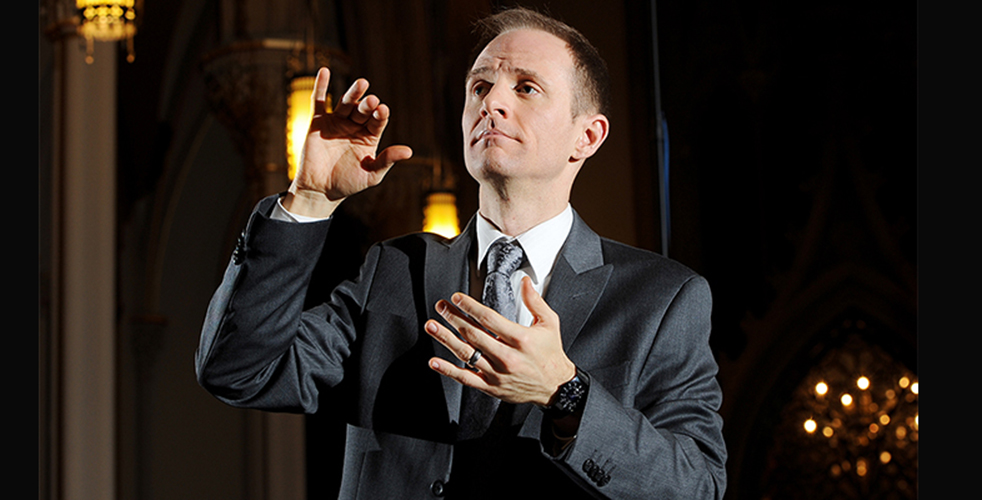 David Fryling, professor of music and director of choral studies, is the 2016-17 recipient of the American Prize in Conducting – Chorus, Community Division. The honor recognizes Dr. Fryling’s performances with the eVoco Voice Collective, of which he is the founding conductor. A Long Island-based non-profit organization of singers of high musical, technical, and expressive abilities, eVoco believes in the transformative and educational power of music. The group’s two main ensembles, the Mixed Ensemble and the Women’s Ensemble, have an “open door” policy for all rehearsals, and teachers and students of music are encouraged to “sit in” on rehearsals in the hope that they will serve as a continual learning space for the larger community.

“I’m surprised and very honored,” said Dr. Fryling. “This is entirely a reflection of the beauty, passion, and dedicated discipline of the people of the eVoco Voice Collective, with whom it is always such a pleasure to make music.”

The American Prize is a series of non-profit national competitions in the performing arts providing cash awards, professional adjudication and regional, national and international recognition for the best recorded performances by ensembles and individuals each year in the United States at the professional, college/university, church, community and secondary school levels. Administered by Hat City Music Theater, Inc., a nonprofit organization based in Danbury, Connecticut, The American Prize was founded in 2009 and is awarded annually.

Dr. Fryling joined the Hofstra faculty in 2000. He currently conducts the Chorale and Chamber Choir, teaches beginning through graduate-level studies in Choral Conducting and Literature, and supervises choral student teachers during their field placements. Recent professional engagements include various all-state and regional honor choirs, master classes, workshops, and adjudications in over a dozen states. From 2007-2013 he served as conductor of the World Youth Honors Choir and Festival Choir at the Interlochen Arts Camp, and since 2014 has been a guest conducting artist at the NYSSSA Choral program. He serves as vice president of the Eastern Division of American Choral Director’s Association (ACDA), and was inducted in the fall of 2014 into the Long Island Music Hall of Fame as an “Educator of Note.”