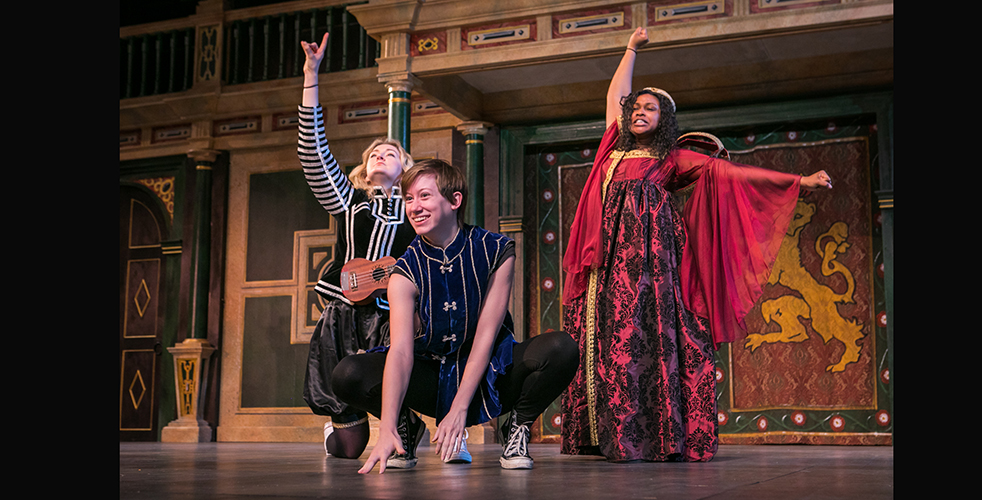 Department of Drama and Dance presents

Can three actors really cover 37 Shakespeare plays in less than two hours? That’s the challenge for Lisa Delia, Heidi Gleichauf and Tunisia Seda and their director Marta Rainer as they present The Complete Works of William Shakespeare (abridged) [revised], March 31-April 9, 2017, on the new Hofstra Globe Stage at the Toni and Martin Sosnoff Theater at the John Cranford Adams Playhouse. This performance is presented by the Department of Drama and Dance.

Written by Adam Long, Daniel Singer and Jess Winfield – better known as the Reduced Shakespeare Company – The Complete Works played nine years at London’s West End. Though wildly irreverent, one of the comedy’s strengths is its preservation of Shakespearean language, even if the dialogue is performed by puppets (Hamlet), during a rap song (Othello) or a cooking show segment (Titus Andronicus).

Tickets: $12; $10 senior citizen (over 65) or matriculated non-Hofstra student with ID. Members of the Hofstra community may receive up to two free tickets upon presentation of a current HofstraCard. For tickets and more information call the Hofstra Box Office at 516-463-6644 or purchase tickets online. Tickets will also be sold at the door starting 90 minutes prior to show time.