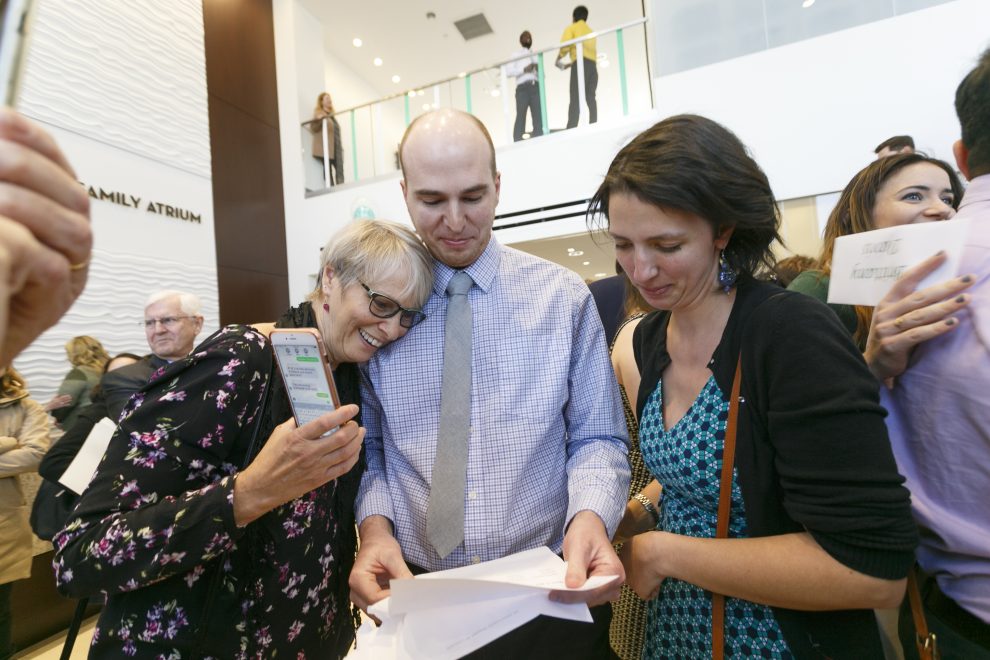 Four years of intense study, training, and a little St. Patrick’s Day good luck came together for graduating students at Hofstra Northwell School of Medicine on March 17 – known in the medical world as Match Day – the time when the nation’s newest doctors learn where they will head for the next step in their training. Hofstra Northwell graduates received placements at health care systems in 15 different states and 20 specialty areas.

During a ceremony at the School of Medicine’s facility that included faculty and family, 74 students opened personalized letters containing their residency match results at noon – the same moment as all graduating medical students throughout the United States.

“Several students from our inaugural Class of 2015 have been chosen to become chief resident of their programs, and I’m confident that you are just as ready for the journey ahead,” said Lawrence G. Smith, MD, MACP, dean of the School of Medicine in a speech to Match hopefuls prior to the official letter opening. “You are our best assets, our ambassadors, and proof of principle that the way we teach medical students to be doctors is working.”

More than half of Hofstra Northwell graduates will remain on the East Coast for residency, while others journey to institutions across the country.  The medical school also raised the bar in diversity, including Hofstra Northwell’s largest number of African-American and Latino students placing in top-choice centers for residency.

“I am so proud of this moment and look forward to sharing this news with my family in Nigeria,” said Muhammad Mutawakkil, accepted into the orthopedic surgery program at Northwestern and a mentor in the School of Medicine’s Medical Scholars Pipeline Program. “It is part of a dream fulfilled.”

Match Day occurs on the third Friday of March each year at allopathic medical schools in the United States where the results of the National Resident Matching Program (NRMP) are announced. The Match process begins in the fall for applicants, usually in the final year of medical school, when they apply to residency programs at which they would like to train.

It’s a process teeming with competition and uncertainty, and why some applicants decide not to enter the next phase of training alone.

In fact, four duos at the School of Medicine successfully vied for residency spots via the NRMP’s “Couples Match,” where pairs of students, from those in committed relationships to friends, can apply for residency together with the goal of landing in the same program and/or region for their training. Soon-to-be-graduate Anna Sonstegard secured a place in the same institution and specialty area as her fiancé, Kareem Halim, who is currently a second-year resident at Northwell Health

“You hope for the best but never know how things will turn out,” said Ms. Sonstegard, who will start preliminary training in pediatrics at Northwell’s Cohen Children’s Center followed by residency in dermatology. “I am happy to be taking this next step with him.”

The success of Match Day followed Hofstra Northwell’s unprecedented leap in rankings among top medical schools in primary care and research in 2018 U.S. News & World Report’s Best Graduate Schools, an extraordinary measure of excellence and rise in reputation for a medical school that graduated its first class of students just two years ago.