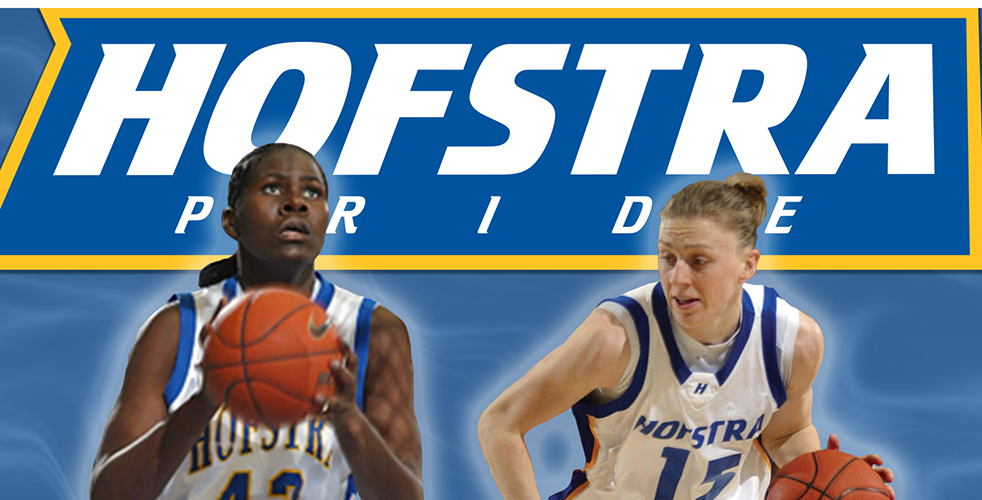 Hofstra Women’s Basketball alumnae Lizanne Murphy ’07 and Vanessa Gidden ’07 came on their official recruiting visit to Hofstra on the same day. Gidden committed to the Pride on the spot and was persistent in her attempts to get Murphy to sign as well.

“We actually had Vanessa commit on the visit,” said Murphy, “and they looked at me and were like ‘Are you going to come too?’ and I was like, ‘Oh my gosh, this is a lot of pressure.’ Vanessa was calling me like every day like ‘You have to come, you have to come!'”

Gidden added, “After [the visit], I just said to her, ‘I’m coming here. You better come with me!’ I made a decision right on my official visit that I would come, so I committed right there on campus. It was the best decision I’ve made.”

Now, 10 years after their final season in Hempstead, their careers still share a number of parallels, with both of them continuing to play basketball overseas as two of Hofstra’s longest tenured professionals. Murphy, a native of Beaconsfield, Quebec, Canada, plays for Union Féminine Angers Basket 49 in France, while Gidden, who came to Hofstra from Stamford, Connecticut, currently plays for TS Wisla Can-Pack Krakow in Poland after spending the past 10 seasons with professional clubs throughout Europe and Asia.

Both have also made Hofstra history – Gidden was the first Pride player to ink a deal with the WNBA, signing with the Connecticut Sun, while Murphy became the University’s first two-time Olympian, representing Canada in 2012 at the London Olympics and in 2016 in Rio.

Before the duo’s fateful official visit to Hempstead, Murphy, who was being recruited out of high school by big-name schools, first came on an unofficial visit to Hofstra. As a Canadian, she was unfamiliar with the NCAA recruiting process. “My parents just got in the car and we drove around and did a bunch of things,” said Murphy. “It was when Coach [Felisha Legette-Jack] was coaching, and we came in, and she didn’t actually know I was going to be coming, so I was so embarrassed. I was like, ‘Oh my gosh, mom, dad, we have to get in the car and turn around.'”

But Murphy quickly fell in love with Hofstra, and being in close proximity to New York City was exciting. “The whole idea of New York was just magical to me,” she said. She also noted she believed fully in Legette-Jack’s vision for the program. “She’s such a passionate woman and I really wanted to go somewhere where I could matter and I could change the culture and write my page in the history books.”

Gidden, who had moved to Connecticut from Jamaica for the opportunity for a better education, knew Hofstra was a place where she could grow academically as well as on the basketball court. She had also been recruited by a number of elite schools, but relished the opportunity to do something memorable with the Pride. “I was just like, ‘Wow, we’ve got a lot of work to do,’ but I was just excited to be a part of something that maybe one day I could say, ‘Well, I came here and we did something.’ It was just a different experience than to go to a UConn or a Tennessee.”

She added that the spirit of the school as a whole drew her in: “It’s weird because when you’re being recruited by so many schools, at this time, you’re confused and you just don’t know how you’re going to make your decision. And someone said to me, ‘You’re going to feel it,’ and I felt it when I went to Hofstra.”

Joining a team that had gone 8-22 the year before their arrival on campus, Gidden and Murphy helped the Pride to a 75-44 mark in their four years, including a 26-8 record their senior season under current Head Coach Krista Kilburn-Steveskey, and trips to the Women’s National Invitation Tournament in 2006 and 2007. Perhaps the most notable accomplishment of their Hofstra careers – and a favorite memory for both Gidden and Murphy – was a 57-53 road win over No. 17 Michigan State their senior season.

“Coach Jack had come over from Michigan State,” said Murphy, “and all we heard about every single day was how good Michigan State is. So when we finally beat them, it just felt so amazing. Michigan State had no idea what was coming for them,” she laughed.

Murphy and Gidden were some of the best rebounders the Pride has ever seen, ranking third and fourth on the program’s all-time chart for career rebounds, respectively, with Murphy finishing with 988 and Gidden posting 911. Both are also members of Hofstra’s 1,000-point club, with Gidden finishing eighth in program history with 1,489 career points and Murphy recording 1,245. Gidden also ranks second in career blocked shots with 175.

Despite their illustrious collegiate careers, neither initially had plans to play professionally after Hofstra. A business and marketing major, Gidden was offered the opportunity to return to her home state and play with the Connecticut Sun of the WNBA. “I never thought about basketball at the professional level,” she said. “I was never a kid that dreamt about it. I came from Jamaica to the United States to get a better education, and that was my main focus. And for someone to say, ‘We want you to play professionally and we will pay you,’ I was like, ‘What?!'”

Murphy originally planned to attend medical school upon graduating from Hofstra, but a simple Facebook message changed her career plans. An international agent reached out to her, asking if she had ever considered playing professionally overseas. Murphy had just made the roster for the Canadian National Team, and her coach had encouraged the national team players to play in European leagues in hopes of bettering the team’s chance at an Olympic qualifying bid.

“I was like, ‘I didn’t even know that was available; I thought it was just for big stars,'” said Murphy of the opportunity to play abroad. “We didn’t qualify for the Beijing Olympics, and that was really a turning point in my life. Our coach said, ‘If you want Canada to ever qualify for the Olympics, you guys have to go overseas.'” Since then, Murphy has played professionally in Finland, Lithuania, Slovakia and Poland and is now in her fourth season in France, playing in Ligue Féminine de Basketball, arguably one of the most competitive leagues in Europe.

After five years on the national team, Murphy helped Canada qualify for the 2012 Olympics in London, the first time Canada had earned a spot in the Games since 2000. “Qualifying for London, I thought about the Olympics and getting there and what I had to do to get there every day of my life for five years, and all of my teammates were the exact same way because no one would’ve said ‘Canada’s making it,'” said Murphy. “Even a lot of my friends would laugh at me when I would say I’m going go to the Olympics. And we did it against all odds.”

Her journey to the Rio Games in 2016 was not without obstacles as well – Murphy tore her ACL just eight months before the Olympics. “Rio, that was a more personal journey,” she said. “I was there individually against the odds. Because to get back to world class eight months after a huge injury, that is almost impossible as well.” Canada advanced to the quarterfinals in Rio, the team’s best Olympic finish since 1984.

Currently, Murphy is averaging 10.8 points and 6.5 points in 32.9 minutes per game for Angers.

Since graduating from Hofstra, Gidden’s professional career has since taken her to Turkey, Romania, Italy, Israel, Spain and Poland. She has also seen great success on the court, helping her clubs to championships on three occasions – once in Israel and twice in Spain, with two different teams. This season in Krakow, Gidden is averaging 11.9 points and 7.0 rebounds in 21.9 minutes per game.

Living in so many different countries, Gidden has done her share of adjusting to foreign cultures. She was the only player on her Turkish club who spoke English, and she has faced a language barrier in every place that she has lived, admitting that she sometimes has to sit down and read an American book to help keep her English up to snuff.

“It’s not for everyone. I’ve talked to a lot of young players, and after the first year they’re like, ‘V, I don’t know how you’re doing it, I don’t know how you’ve done it for 10 years,'” she said. “The good thing is that I get to experience the different cultures and you get to travel the world for free. You get paid doing the thing that you love doing.”

Gidden runs Veez Hoops, a youth basketball camp, while she is home in Connecticut for the summer and has plans to found a youth basketball academy when her professional playing career comes to an end. Murphy, meanwhile, is in the process of becoming a French citizen. But both agree that they owe much of their success to the time they spent on the Hofstra hardwood.

“I think at Hofstra, especially with my team, we were like sisters, and we still are. And I think that I try to bring that same spirit to wherever I go,” said Gidden. “I was always a passionate player, but I felt like I was able to be that and more and Hofstra because of what we stand for at Hofstra. It was all about pride, it was all about passion.”

Murphy added: “One thing that Coach Jack taught me is how to work hard, how to work harder than you think is physically possible, and then to work even harder than that. Anything you dream, you can achieve it. I know it sounds cliché, but I’m literally living proof of that.”