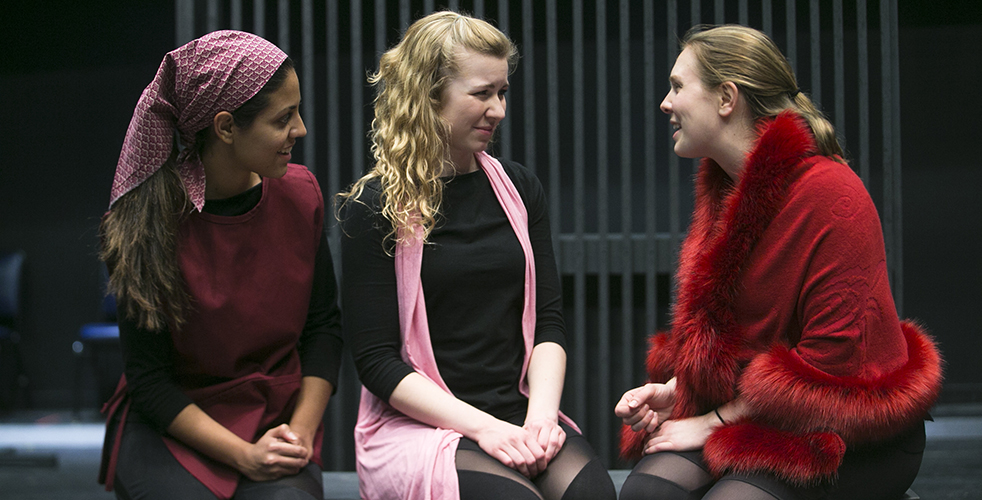 In addition to the elaborate presentation of Hamlet on the new Hofstra Globe Stage, the 68th Annual Shakespeare Festival features a one-hour production of Romeo and Juliet and the “Festival Musicale,” a concert by the Hofstra Collegium Musicum. These will be performed on Saturday, March 11, at 2 p.m.  The one-hour adaptation of Romeo and Juliet, titled This Bud of Love, will also have a special performance on Thursday, March 9, at 8 p.m. All performances take place at the Toni and Martin Sosnoff Theater at the John Cranford Adams Playhouse, South Campus.

This Bud of Love was performed in 2008 and 2013, each time with a different approach to the material. This year, in the spirit of Shakespeare’s all-male productions, This Bud of Love features an all-female cast who play multiple roles and speak directly to the audience to move the plot forward.

This is the 10th year that a one-hour adaptation of a Shakespearean work has been part of the Shakespeare Festival. This Bud of Love was adapted from Romeo and Juliet by Hofstra Adjunct Professor of English Maureen Connolly McFeeley and features direction by Professor of Drama Jean Dobie Giebel.  The cast and crew of This Bud of Love are also touring local high schools. The tour gives Hofstra students the extremely valuable educational and artistic experience of taking a show on the road.

The Hofstra Collegium Musicum is an ensemble of students, faculty and alumni from the Music Department devoted to the performance of early music. The Festival Musicale includes a chorus and ensembles of historical instruments. This year’s Festival Musicale, directed by Professor Christopher Morrongiello, is Behind the Arras. Professor Morrongiello describes the program as a loose parody of scenes in Hamlet: “There’s a ghost and there are songs and instrumental music from Shakespeare’s time about shadows, illusions, darkness, confusion that evoke many of the themes in Shakespeare’s tragedy. There’s even an instrumental piece titled ‘The Night Watch.’”

As for the concert title, Professor Morrongiello explains, “An arras is a rich tapestry that was hung on the walls to add warmth or to conceal a secret alcove in many a castle or manor house during earlier times. Anything can happen behind the arras – courtship, love-making, secret dealings, deep prayer, death. You’ll have to attend the concert to see what unfolds.”

Tickets to the March 9 and March 11 performances are $6. Members of the Hofstra community receive two free tickets with current HofstraCard.  Tickets may be purchased online, at the Hofstra Box Office or by calling  516-463-6644. Tickets will also be sold at the door starting 90 minutes prior to show time. For more information visit the Department of Drama and Dance and the Department of Music.