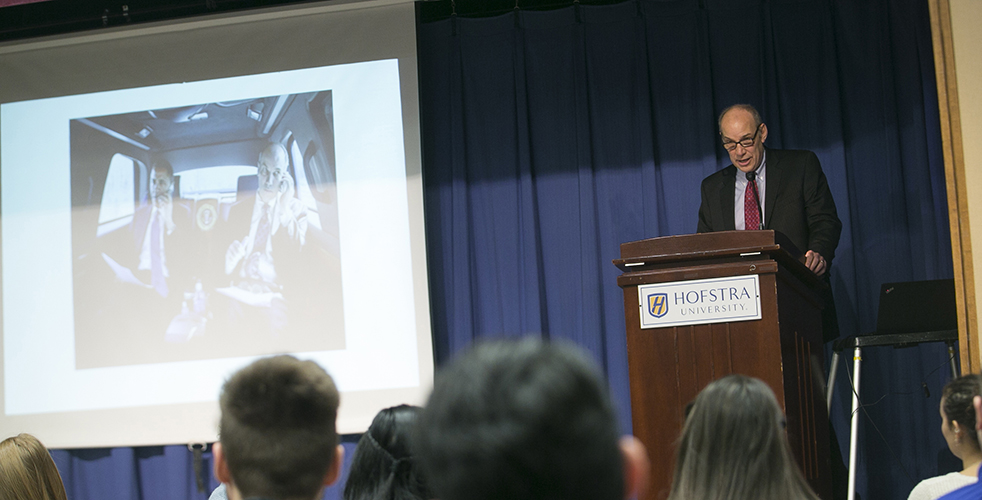 Political consultant and strategist Phil Schiliro ’78 was the inaugural speaker of the “Lives in Public Policy and Public Service” series presented today by the Peter S. Kalikow School of Government, Public Policy and International Affairs. Schiliro, an expert in environmental law, has held positions in the Obama administration and worked on pieces of legislation including the Affordable Care Act, the Clean Air Act, and policies regarding tobacco and climate change.

“When I come back to Hofstra, it’s always special for me,” Schiliro said at the beginning of his lecture. A projection screen at the front of the room displayed a picture of him and former President Barack Obama in a car together, on their phones. Schiliro explained they were in the final stages of moving healthcare reform to law. He said he is sometimes still awed that he had such a pivotal role at the White House. He grew up in a Republican household, with politically-minded Italian grandparents who would often write letters to the mayor of New York. Their interest and advocacy shaped his decision to become a Democrat. “I saw the magic of what a democracy was,” he said.

Schiliro shared some inspiring stories of his youth. In high school, he pitched a story to a local reporter about his investigation of unlawful landfills in his hometown. Media coverage followed, and Schiliro rounded up his classmates to picket. When the police arrived and told everyone to disband. Schiliro refused, even though his friends left. It was his first time taking a stand and coming to the realization that “democracy works.”

“When you want to make an impact on public policy, you have to be in it for the long haul,” Schiliro said. He explained advocacy takes time and that issues cannot be addressed overnight. His work on the Clean Air Act and the tobacco legislation each took more than 10 years.

Circling back to the picture of him and former President Obama that was on display at the beginning of the lecture, he reminisced about being in the Oval Office discussing healthcare reform. President Obama received a phone call in the middle of the conversation. It was during that pause that Schiliro was struck by his extraordinary position. “You don’t have to come from a political background,” to fight for these important issues, he said.

New Dean for Liberal Arts & Sciences
What Can We Learn from the Worst?