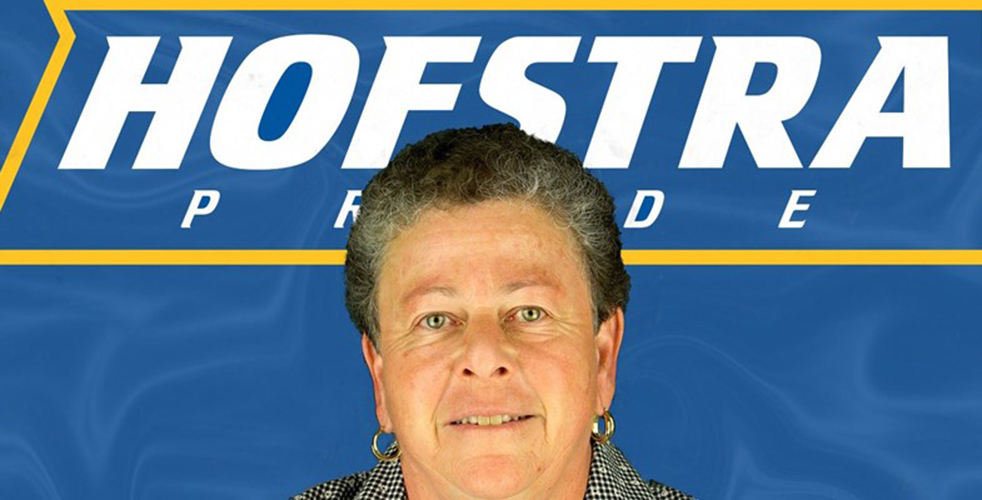 Through the years many things have changed within the Hofstra University Department of Athletics, but one thing that has remained constant is the presence of Senior Associate Director of Athletics Cindy Lewis.

A fixture at Hofstra since her undergraduate career as a student-athlete in the mid-1970s, Lewis has been part of many of the transformative moments in Hofstra Athletics history.

Lewis came to Hofstra in the fall of 1975. “I was the first in my family to attend college and I had to stay local,” Lewis, who grew up in Massapequa and went to Berner High School, said. “Getting to play field hockey, which I really enjoyed, was a great opportunity and that was probably why I ultimately decided on coming to Hofstra.”

During this time Hofstra added women’s lacrosse as a sport under Hofstra Hall of Fame Coach Dr. Nathalie J. Smith and there was a call to other student-athletes on campus to join. Lewis remembers a group of student-athletes from the field hockey and women’s basketball team joining forces to fill out that initial roster and learn the game from scratch. “I loved being with the field hockey program,” Lewis stated. “I enjoyed the competition and being with my teammates, but I thought it was intriguing to go out and try lacrosse. It took a long time to master the skills needed to play, like cradling the ball and catching it. But it was a nice opportunity. We played schools that were much more accomplished, so we took our lumps the first two years, but started getting better as Dr. Smith was able to recruit players with lacrosse experience.”

In reflecting on her athletic experience at Hofstra, Lewis recalls that it was a difference time in the 1970’s. “The athletic experience was different then. It was just on the cusp of Title IX and we did not know what we didn’t have. There were a lot of differences between the women and men’s programs in terms of travel and budgets, but slowly money came into the program and things began to change. When I returned to Hofstra to coach, it had changed even more as the women’s programs had scholarships to offer and that made all the difference.”

Still Lewis has fond memories of her playing days. “I have lifelong friends that I am still in touch with and they still support Hofstra Athletics today,” she said. “We all had a great experience with very good coaches, and my experience here set me off on my current career path.”

After graduating in 1979, Lewis headed to the University of New Hampshire to pursue her master’s degree in physical education and plan for a career in teaching. But shortly after graduating in the summer of 1980, she received a call asking if she would be interested in the part-time head coaching position of the Hofstra Field Hockey program. Lewis would accept and soon added teaching physical education classes and assisting Dr. Smith on the women’s lacrosse staff to her duties. In 1982 the field hockey and women’s lacrosse coaching positions were combined into one full-time position, which Lewis took on. “I enjoyed coaching but in 1984, Eve Atkinson, our director of women’s athletics at the time left to go to Temple University and there was an opening. I like organization and the business aspect of things, so I threw my hat in the ring and became an administrator while continuing to coach. But after the 1984 field hockey season, I transitioned to full-time administrative role.”

“Hiring Bill Edwards worked out very well for our program,” Lewis said with a laugh. “Our program was in a transition period and one of our student-athletes, Leslie Schlegel, came to me saying she knew of a coach in Suffolk County who would be perfect for the job. I called him and brought him in for an interview. At the time, he did not have a big softball background, but he did have a big background in teaching physical education and coaching other sports, and was very well revered by his peers. It was a tough position to fill due to its part-time status but Bill was able to balance his full-time teaching responsibilities in Commack with his duties here and the rest is history.”

The start of women’s soccer at Hofstra and the hiring of Russell was a great thing that stemmed from a dark moment. “We had a very competitive gymnastics team,” Lewis explained. “But due to increased requirements that included installation of a spring floor in the PFC, we had to end the gymnastics program, which was a trend taking place at many schools across the country. But we replaced it with soccer, which started as a club team in 1992. I had coached Joanne’s daughter, Debbie, in lacrosse and I knew she was a highly respected coach on Long Island. So I reached out to her and she was excited to take on a new challenge. She led the program to great things and left it in great hands with Coach Riddiough.”

Lewis had served on the initial search committee during the hiring of Kalafer, but it was Atkinson who made the final decision on her hiring which had a huge impact on the Hofstra Volleyball program and Lewis’ career. “Fran was a program game changer,” she said. “Like Bill, Fran had a physical education background and brought a lot to the table with those varied experiences. She was ahead of her time and always pushed the envelope to better her program. It was interesting working with her and I learned a lot.”

One aspect of Lewis’ career that she is most fond of has been her service to college athletics through a variety of NCAA and conference committees. One of the highlights of that service was being a member and eventually chair of the NCAA Volleyball Committee in the mid 1990’s. Lewis credits Coach Kalafer with getting her involved with the committee. “There was an opening and Fran called some of her people and they had an interest in adding someone from the east coast since it was very west coast leaning at the time,” Lewis said. “It was a fabulous experience. I met all the big coaches and administrators in the sport, got to visit all of the big volleyball schools and was able to work with these people to make to make changes in the governance of the sport. It was a very fulfilling opportunity. During my tenure on the committee, we were able to realign the various regions, which I think made a huge impact across the country in terms of accessibility for NCAA Tournament selection and regional and national rankings.”

Lewis has seen her fair share of changes at Hofstra and was involved in making many of them happen. “Trying to fight for the women to have opportunities in an era that was dominated by men and their needs was challenging but then all of a sudden it changed,” Lewis said. “Coming from Title IX to having full scholarship team sports has been one change that I think has made a tremendous difference in the competition world for Hofstra Athletics. We have had great support from President Rabinowitz and President Shuart. During Dr. Shuart’s tenure we really made a switch over to having funding for all our programs. We have also have made great strides in our conference affiliations and each of those has been rewarding. As former Director of Athletics Bob Getchell used to say, ‘it is all about who you rub shoulder pads with.'”

Some of the other moments of her career that Lewis happily remembers include having the United States National Volleyball Team play an exhibition match against Japan that drew a standing room only crowd in the David S. Mack Physical Education Center. “They actually had to close the doors to prevent more people from entering,” Lewis remembers. She also looks back fondly on the tenure of Jay Wright and his ability to build the basketball team up to where home crowds outgrew the PEC on a regular basis, which resulted in the construction of the David S. Mack Sports and Exhibition Complex.

Hofstra’s many competitions against some of the top teams in the country, as well as working with great coaches, administrators and student-athletes also rank high on the list of Lewis’ top Hofstra recollections.

She is also happy to serve as an ambassador (for lack of a better term) to many of the athletic alumni that return to campus. Her long tenure makes her an easily recognizable face for those former Hofstra student-athletes. “I am the connection to Hofstra for a lot of the older alums,” she states. “They don’t know the players or the coaches, but they remember me.”

After more than 40 years as part of Hofstra Athletics, Lewis still embraces her role. “I love every day that I come to work,” she said. “There is an excitement that comes from being with college students, who love what they are doing and who I enjoy watching. Every day is different. I love the coaches and administrators I work with. I think the biggest thing is that you are still part of a team. I was on a team when I was a student here and I am still part of a team now.”