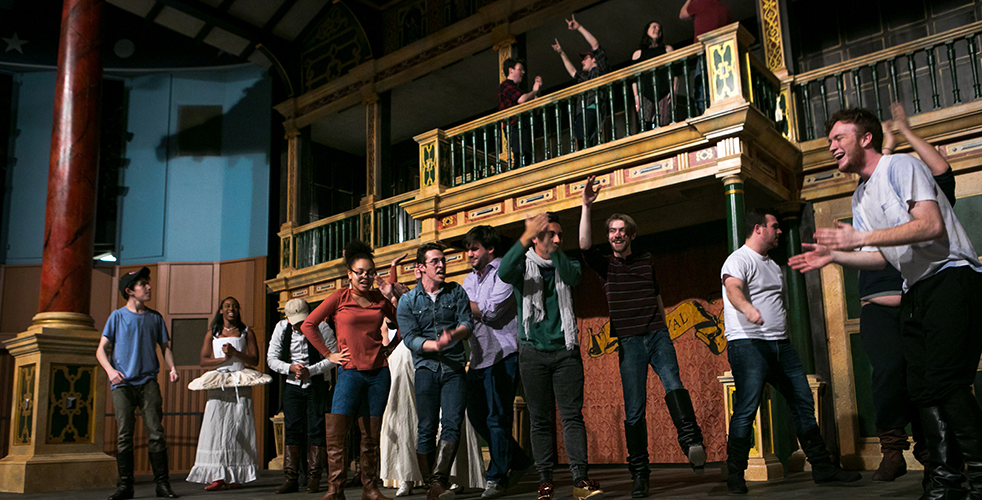 Hofstra’s 68th Annual Shakespeare Festival will be performed the way its founder, Dr. John Cranford Adams, and Shakespeare himself would have envisioned it: on a Globe Stage. Nine years after Hofstra University’s historic first Globe Stage was retired, a new one – the most authentic replica in America – will make its debut with the March 2 premiere of Hamlet. This year’s Shakespeare Festival also includes This Bud of Love – a one-hour adaptation of Romeo and Juliet – and a concert by the Hofstra Collegium Musicum. Additionally, Hofstra alumnus Joe Morton, the Emmy Award-winning actor currently starring in the ABC series Scandal, will be on campus Monday, March 6, at 7 p.m. to give a free public talk about his experiences in the Shakespeare Festival and about his illustrious career on the stage and in film and television (subject to his professional schedule). Read the Newsday story

March 2-12
Hamlet
by William Shakespeare
Directed by Christopher Dippel
As relevant today as it was over 400 years ago, Hamlet is a revenge tragedy like no other. When Hamlet learns the truth about his father’s “foul and most unnatural” death, he reflects on his life – past, present and future; mortal and immortal – and provokes us to do the same.
Show times: Thursday, March, 2, at 8 p.m.; Friday, March 3 and 10, at 8 p.m.; Saturday, March 4 and 11, at 8 p.m.; Sunday, March 5 and 12, at 2 p.m.
Tickets: $12; $10 senior citizen (over 65) or matriculated non-Hofstra student with ID. Two free tickets with current faculty/staff/student HofstraCard.
There will be an opening night reception with refreshments and alumni reminiscences of the Hofstra Shakespeare Festival at the Schaeffer Black Box Theater on Thursday, March 2, at 6 p.m. There will be pieces of the old Hofstra Globe Stage and costumes from past Shakespeare Festivals on display. Tickets to the reception are $25. RSVP at hofstra.edu/globe2017  or call 516-463-5339.

March 9 and 11
This Bud of Love – A One Hour Romeo and Juliet
by William Shakespeare
Adapted by Maureen McFeely
Directed by Jean Dobie Giebel
This timeless story of star-crossed lovers, whose tragic end reconciles an age-old feud, is an excellent introduction to Shakespeare, suitable for young audiences.
Show times: Thursday, March 9, at 8 p.m., and Saturday, March 11, at 2 p.m. – special performance with The Collegium Musicum, a Hofstra music ensemble devoted to the performance of little-known music of the past, customarily called “Early Music.”
Tickets: $6. Two free tickets with current faculty/staff/student HofstraCard.

Hofstra Professor Christopher Dippel, who is directing Hamlet said, “The Hofstra Globe Stage gives us an opportunity to explore Shakespeare’s plays the way they were originally presented.”

“Playing Hamlet on the Hofstra Globe Stage … it’s a big deal and a great honor,” said Will Ketter, a junior from Andover, MN, who will be playing the prince of Denmark. “At the same time, that pressure, that responsibility comes with all this help and world of experience from all these wonderful people who came before us – especially William Shakespeare.”

Hofstra Drama Professor David Henderson, the designer of this Hofstra Globe Stage reconstruction, spent time abroad in consultation with the archivists and design staff of Shakespeare’s Globe in London. He is the only American college professor to have had the opportunity to study the original plans.

The first Hofstra Globe Stage was built in 1951 under the direction of Donald (Doc) Swinney. It was based on the meticulous research of John Cranford Adams, Hofstra’s third president and a renowned Shakespearean scholar. It was completed in time for Hofstra’s second Shakespeare Festival and erected in the campus gymnasium. The Globe stage was given a permanent home in 1958 in the Hofstra Playhouse (later renamed the John Cranford Adams Playhouse). For many decades, the Shakespeare Festival was presented on this Globe and featured many students who went on to success in the performing arts – Morton, the late Madeline Kahn, Susan Sullivan, Susan H. Schulman, Phil Rosenthal, Tom McGowan, Peter Friedman and Margaret Colin, to name a few.

As Professor Henderson explained in a fall 2016 lecture about his research, the shape of the first Hofstra Globe stage was altered due to fire code, and it became used more sporadically due to age and the strain of building and dismantling it for so many years. But in the end, new research led to the first stage’s retirement in 2008.

In 1989 archaeologists in London uncovered the almost-intact foundation of the 16th century Rose Theatre and a partial foundation of the Globe. These discoveries, along with modern imaging techniques and computer analysis of original documents, created a much clearer picture of how the Globe was built, what it may have looked like, and how it functioned. “We wouldn’t use a textbook from the 1950s to teach our students today,” Professor Henderson said. “The stage is our textbook, or one of our many textbooks. We couldn’t continue to train our students on something that doesn’t connect to what we now know existed.”

The biggest differences in the new Hofstra Globe Stage will be in its shape and more ornate decoration. “Dr. Adams described the interior of the Globe as ‘a short row of London houses,” said Professor Henderson. “But the people at the London Globe thought why would the inside look like an exterior?” Further research indicates that it is more likely the stage would have had “brilliant jewel colors” and not a Tudor interior.

Not long after Hofstra retired its first Globe Stage, drama alumni began asking if there were plans to build a new one.  Lydia Leeds and Peter Garino, both Class of 1977, who performed in the Shakespeare Festival together during their student years, produced a 50-Minute Romeo and Juliet at the University in 2015 to jumpstart the fundraising for the new Hofstra Globe Stage. Alumni Phil and Monica Rosenthal and Toni Sosnoff and her husband Martin gave generous gifts to fund the construction. In addition to fundraising, alumni also found other ways to support the project.

Though construction on major set pieces took place off campus at Cigar Box Studios – an upstate scenery shop that has worked with Radio City Music Hall, Madison Square Garden, ESPN and other production companies – assembly and painting took place on campus. Stephanie Stover Ferraioli ‘06, an adjunct instructor of drama, has overseen the painting of the Hofstra Globe Stage and has been instrumental in rallying other alumni to pitch in. She and Professor Henderson started a Facebook page so alums could follow the construction. “We’ve had alumni from several decades stop by to see how they could help,” said Ferraioli. “A grad from 1978 was the furthest back. Another alumna from 1981 was in town and heard about the project from a former classmate. When her flight home was delayed she decided to come out to campus and pick up a paintbrush to pass the time!”

Ferraioli, whose team also includes her husband Richard ’05 and a legion of students, added that she was not surprised by the warm response of her fellow alumni to the call to arms. “Most of us worked on the old Globe stage at least once, so we feel very nostalgic about it. This project brings the past to the present and the present to the future, because we know this stage will be used for a really long time.”

When asked how the new Hofstra Globe Stage will impact the education and performance for Hofstra actors, Hamlet director Christopher Dippel said it’s a time travel experience for the students. “The Hofstra Globe Stage helps us to understand how the stories were told and look at some of the challenges Shakespeare’s company was wrestling with. For example, when we present Hamlet, the house lights will be on. We will be interacting directly with the audience in the same way Shakespeare’s company would have, because they performed outside in daylight.

“In addition to that, we’ll discover how long it takes to go from the Lords Gallery upstairs down to the stage. That is why certain scenes have an extended ending – because one character has to exit and then enter immediately afterward. There are so many discoveries you make working on a stage like this.”

Samantha Kamelhar, a junior from Bellmore, NY, who is playing Horatio, said there are “no words” to describe the thrill of being in the first cast performing on the Hofstra Globe Stage. “To be performing for all the people, all the alumni who have come back to work on the stage, and knowing it’s the most accurate representation in the States – it’s incredibly exciting.”

For tickets to the 68th Annual Hofstra Shakespeare Festival, visit the Playhouse Box Office from Monday to Friday, 11 a.m.-3:45 p.m., or call 516-463-6644. Tickets are also available for purchase online.