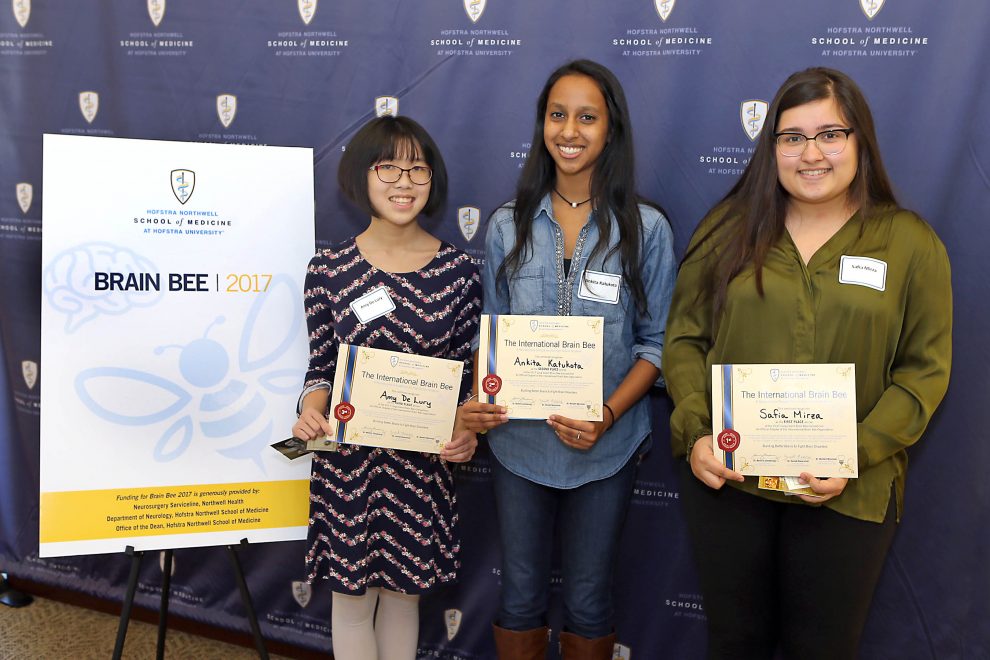 It was a buzzworthy meeting of young minds at the Long Island Brain Bee, a regional high school science competition hosted for the first time at Hofstra Northwell School of Medicine on Saturday, February 4, 2017. Competitors included 31 students, ages 14-18, from over 15 high schools in Nassau and Suffolk counties.

“Study of the brain is something I had never considered before this competition,” said Mirza. “I learned that the answer to a lot of diseases lies in the brain.”

Mirza’s prize includes a trip to compete in the National Brain Bee on March 17, 18 and 19 at the University of Maryland, Baltimore. The winner of the U.S. finals will move on to the International Brain Bee Championship in Washington DC.

The first leg of the national Brain Bee is a local one-day contest that takes place in communities throughout the U.S.; in New York, it includes Long Island, New York City and Westchester County.  The goal is to expose young scholars to the study of the brain and motivate early career interest in the fields of neuroscience research and clinical sciences.

“Events like the Brain Bee are perfect opportunities to encourage students when they are most curious,” said Zeinab Nassrallah, PhD, assistant professor of science education at Hofstra Northwell and Brain Bee co-coordinator with Beverly Clendening, PhD, associate professor of biology. “The earlier we spark their interest in neuroscience, the farther we can advance the field.”

The Long Island Brain Bee consisted of three rounds of competition—a multiple-choice exam on brain facts, a laboratory demonstration, and a test to identify anatomical functions and structures in human brain specimens. Contestants also participated in a charades-style round in which they identified brain disorders, treatments, and diagnostic tools based on skits prepared by School of Medicine students. Preparation for the Brain Bee requires study of Brain Facts, a primer on the brain and nervous system published by the Society for Neuroscience.   The contest was last held on Long Island in 2014.

Along with medical students, Northwell Health researchers and residents in psychiatry assisted in the day’s activities.  In addition, Nicholas Santangelo, PhD, and Elisabeth Ploran, PhD, both from the Hofstra College of Liberal Arts and Sciences’ School of Natural Sciences and Mathematics, spoke to the students about neuroscience research, while Maya Frankfurt, PhD, a professor of science education at Hofstra Northwell, served as Brain Bee judge.