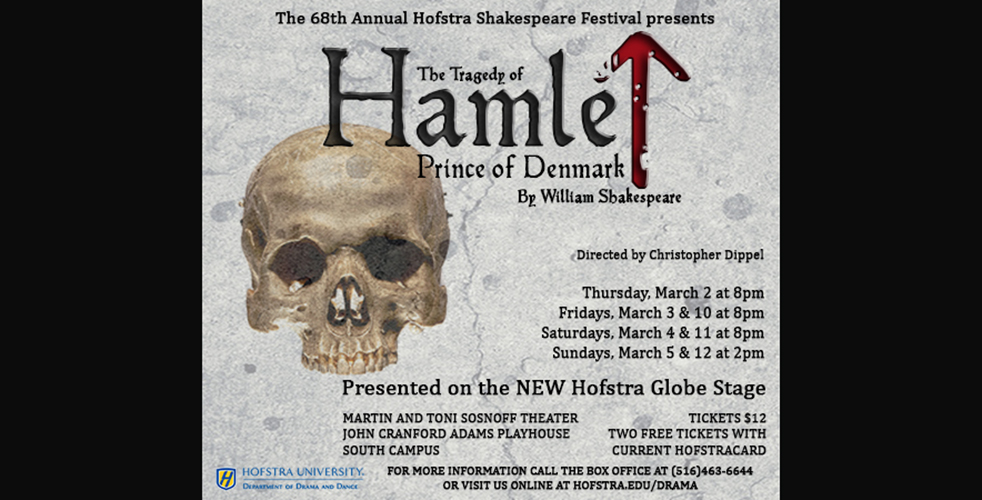 America is about to see the debut of its most historically accurate recreation of Shakespeare’s Globe stage – not on Broadway, Los Angeles or La Jolla, but at Hofstra University this March. While much of the campus has been quietly preparing for the start of the spring 2017 semester, there has been no such lull at the Toni and Martin Sosnoff Theater at the John Cranford Adams Playhouse or Emily Lowe Hall where construction on a historic Hofstra Globe stage and rehearsals for its first production – Hamlet – are underway.

The design of the Hofstra Globe Stage will be a working laboratory for students, faculty and guest artists. Hofstra Drama Professor David Henderson, the director of this project, is the only college professor and set designer to have spent considerable time abroad in consultation with the archivists and design staff of Shakespeare’s Globe in London.

Hamlet is the headline event of Hofstra’s 68th Shakespeare Festival, one of the longest running Shakespeare festivals in the United States. Other spring performances will also make use of the unique Globe setting. Tickets are on sale now for these, and the Hofstra community may receive up to two free tickets to each production upon presentation of a valid HofstraCard. Visit the Playhouse Box Office from Monday to Friday, 11 a.m.-3:45 p.m., or call 516-463-6644. Tickets are also available for purchase online at hofstratickets.com.

As relevant today as it was over 400 years ago, Hamlet is a revenge tragedy like no other. When Hamlet learns the truth about his father’s “foul and most unnatural” death, he reflects on his life – past, present and future; mortal and immortal – and provokes us to do the same.

There will be an opening night reception with food, drink and reminiscences from alumni of the Hofstra Shakespeare Festival at the Schaeffer Black Box Theater on Thursday, March 2, at 6 p.m. There will be pieces of the old Hofstra Globe Stage and costumes from past Shakespeare Festivals on display. Tickets to the reception are $25. RSVP at hofstra.edu/globe2017 or call 516-463-5339.

This Bud of Love – A One Hour Romeo and Juliet

This timeless story of star-crossed lovers, whose tragic end reconciles an age-old feud, is an excellent introduction to Shakespeare, suitable for young audiences.

Show times: Thursday, March 9, at 8 p.m., and Saturday, March 11, at 2 p.m. – special performance with The Collegium Musicum, a Hofstra music ensemble devoted to the performance of little-known music of the past, customarily called “Early Music.”

by The Reduced Shakespeare Company, directed by Marta Rainer

Three actors perform all 37 plays in 97 miutes. Fast, funny and physical, this is a show made for people who love – and hate – the plays of William Shakespeare.