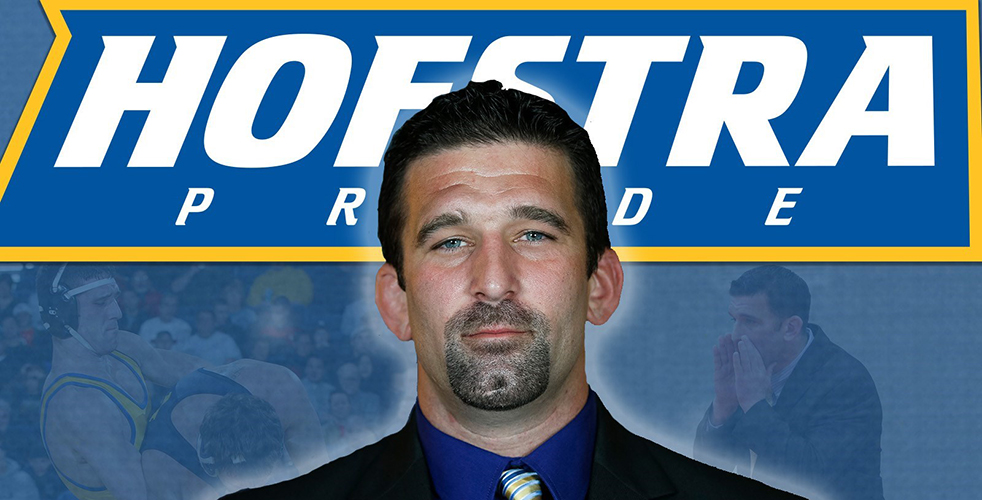 Some people aspire to become coaches while others are born to be coaches. In the case of Hofstra University’s newest assistant wrestling coach Michael Patrovich, he can certainly be considered both.

Patrovich, a 2007 alumnus of Hofstra, enjoyed a stellar wrestling career for the Pride from 2002 through 2007 which included a red-shirt season and a medical hardship year. Along the way he recorded achievements which placed him among the all-time Hofstra Wrestling greats.

Patrovich is a 2007 Hofstra graduate

A four-time NCAA Division I Championship qualifier at three different weight classes, Patrovich twice earned NCAA All-American honors. As a junior in 2006, he placed fourth at 174 pounds to pick up his first All-American honor and cap a 34-5 season for the Islip, New York native. That season also included his second Colonial Athletic Association championship as well as being named the CAA Wrestler of the Year

A year later, Patrovich wrapped up his collegiate career with a sixth-place finish at 165 pounds to record his second All-American honor. He also picked up his third CAA individual championship and was named the CAA Wrestling Championship Most Outstanding Wrestler. Patrovich is one of just three Hofstra wrestlers to have received both Wrestler of the Year and Championship Most Outstanding Wrestler honors in the CAA.

If those accolades weren’t enough to go with his 106-30 record over the course of his Hofstra career, the CAA recognized Patrovich as a member of the 25th Anniversary Wrestling Team in 2008-09, joining seven other Pride alums.

After considering his graduation was just 10 years ago, one would think his apprenticeship in coaching is fairly recent. In reality, it started when he was a six-year old under the tutelage of his youth wrestling coach, who more importantly is his father, Joe Patrovich. “I started wrestling at Connetquot Youth Wrestling where my older brother (Joe) was wrestling and my dad was coaching,” Michael Patrovich said. “My dad never pushed me to wrestle. It was just a natural progression.”

Actually, wrestling was one of the big sports in the Patrovich family with football being the other. In addition to cousins and brothers, the patriarch of the family, Joe, Sr. was a high school wrestling state semifinalist in his day before going on to play football at LIU Post. But football still had an attraction to the Patrovich family, partly because dad was having an outstanding career as a teacher and coach of  football and wrestling at Islip High School. You can’t spend all that time with your father/coach without some-or a great deal-of coaching and life lessons rubbing off on you.

Michael would go on to continue wrestling and playing football under his father at Islip High School. He would become a two-time all-league selection in football while playing quarterback and cornerback but his sights focused in on wrestling as a sophomore.

“For as long as I had been wrestling, I have also had a great love and passion for football,” Michael says. “It was in my sophomore year in high school when I turned the corner about wrestling. I put in a lot of work in the preparation for the season and won a country title, beating a kid who placed in the states the previous year. It was a big upset and it was an exciting win that motivated me moving forward. That’s when I decided that I was a wrestler first before anything else.”

It would be the first of three County Championships for Patrovich, who was quick to give credit. “I wasn’t favored to win my first country title,” Patrovich recalled. “The only people who believed that I could win it was my father, my other coaches and I. That year was inspiring for me because I put in the work and time to be successful and it worked out and I placed in the states.”

Patrovich learned another lesson as a junior and, as painful as it was, it was a key lesson, both in wrestling and in life. After winning the country title, he advanced to the finals of the state championships where he dropped a heart-breaking overtime decision to Joe Mazzurco. “I lost by a coin-flip (ultimate ride-out) and by my lack of offense.” Patrovich admits. “No one likes to lose but that loss in the finals was probably the best thing that ever happened to me. It drove me the next year to be motivated to win the state title as a senior. I knew I could win if I could get better and create more offense. I was a different wrestler.”

Patrovich was extremely motivated as Mazzurco they would be 1-2 in the rankings all season. A third country championship would follow and Patrovich would avenge his loss in the state finals as a junior with a regulation decision over Mazzurco in the finals. He would add the High School Nationals title to his trophy case as well as receiving both the Suffolk Country and Long Island Wrestler of the Year awards. “When I won the high school national title as a senior, I credited that junior loss in the state finals for my success,” Patrovich remembered.

After having the guidance of his father, as a coach right through his high school days, Patrovich took his coaching apprenticeship to Hofstra under Tom Ryan, who rebuilt the Pride program and started a CAA dynasty. After “dark days” for the Hofstra program in the mid-1990s, Ryan ushered in a new era which resulted in six consecutive conference titles between 2000 and 2006, including the last five in the CAA.

Patrovich would learn about building up a wrestler, both mentally and physically from Ryan, who would later lead the Buckeyes of Ohio State to the NCAA Division I Wrestling Championship in 2015. “Committing to Hofstra early, took all the pressure off of me during my senior year and helped me win the state title,” Patrovich said.

Ryan’s confidence in Patrovich did not waiver. “I had plenty of surgeries and was really banged up during my time at Hofstra,’ Patrovich states. “I’m not sure that I would have gotten through it if Tom (Ryan) didn’t have the confidence and faith in me. He was behind me 100%.”

Another thing that Ryan taught Patrovich, either overtly or by example, was to surround yourself with good people. After Patrovich had two reconstructive shoulder surgeries in his first three seasons at Hofstra, a coaching staff addition was a big boost for Patrovich. “In 2004-05, Tom (Ryan) brought in Donny Pritzlaff as an assistant,” Patrovich says. “It was an unbelievable gift for me. Donny was still competing at the time and I was able to attach myself to him and do all the extra workouts with him. He was like a second breath to my career that year.”

After a slow start, Patrovich would go on to win his first CAA title at 165 pounds and advance to the NCAA Championships where he would be knocked out in the All-American round.

He would cop the CAA title again in 2005-06, this time at 174 pounds, and would complete the trip to the All-American podium with a fourth-place finish and a 34-5 record. “I had a lot of confidence going into the year and put in a lot of time in lifting and getting bigger and doing everything I could to get on to the podium,” Patrovich said.

Patrovich’s final season at Hofstra was a tough one.  Tom Ryan left Hofstra for Ohio State and Patrovich returned to the talent-heavy 165 pound weight class. “”I knew what I had to do and my goals were what they were the previous year,” Patrovich said. “Nothing really changed for me except the weight class and the coach. When Tom Ryan left, I was devastated because of the relationship and respect that I had for him. But when Tom Shifflet came in, I felt comfortable with him right away. He had a laid back personality but was very good at the preparation and technical aspects of wrestling. It was a great transition for me. The two coaches were complete opposites but they complemented each other. I believed in them both.”

Patrovich ended his collegiate career in 2006-07 with a 20-7 mark, his third CAA title and his second All-American honor, this time at 165. Patrovich is nothing but proud of his career. “I have told our Hofstra wrestlers, as well as my high school wrestlers, that if you put in the time and do everything possible to win, no matter what happens, you will be able to look at yourself in the mirror. I knew that coming off the mat at the end of my career.”

After his stellar career as a wrestler, he turned that apprenticeship into practice as head varsity wrestling coach at Half Hollow Hills West High School from 2008 through 2013. Patrovich turned a struggling program into a top 10 program in the county with a state champion, both school firsts. He also served as their head football coach from 2011 through 2013. “I knew I wanted to coach coming out of college,” Patrovich says. “It just wasn’t good timing for a college position at the time. I was starting a family and Half Hollow Hills West was everything that I wanted.”

After being excessed in 2013, Patrovich returned to coaching as an assistant varsity coach at Eastport South Manor from November 2013 through March 2016 and also served as the school’s football defensive coordinator in 2014 and 2015. He also worked for a construction company during that time to support his family.

Last August, Patrovich accepted an offer from Hofstra Head Wrestling Coach Dennis Papadatos to join the staff at his alma mater. “”Mike and I are cut from the same cloth,” Papadatos says. “We think the same way, we were coached by the same guy, and we are both from Long Island. A lot of stuff that I preach to our guys now, I know that Mike lived too.”

Papadatos sees other benefits from Patrovich’s career and experiences. “As a wrestler, Mike worked as hard as anyone that I can ever remember,” Papadatos states. “When I hired him I was trying to bring that culture into the program, that hard-hand-fighting, relentless attitude. He immediately fit in. The guys like him and he is involved in everything. I call Mike and Jamie (Franco), the last pieces of this puzzle.”

“At the end of the day, I probably didn’t pursue a college coaching position because I knew Hofstra would be the only place that I would ever go,” Patrovich says. “I was born and bred on Long Island and so is my wife Jeneane, who is also a Hofstra alum. My family is here and we are deeply rooted here. Coaching is what I love to do. This is what I am passionate about. It’s nice to be able to do something that I love at a place that I love.”