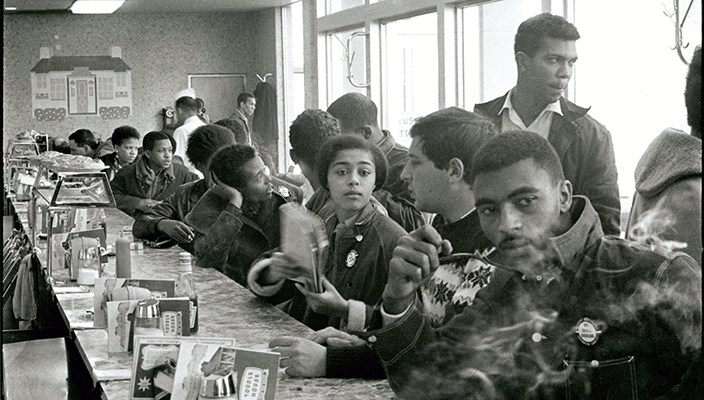 Works of Danny Lyon, a photographer best known for capturing some of the most memorable and haunting images of the civil rights movement, will be showcased in an exhibition presented at the Hofstra University Museum. Danny Lyon:  Memories of the Southern Civil Rights Movement will be featured January 31- April 13, 2017 at the Emily Lowe Gallery, organized by art2art Circulating Exhibitions. An opening reception that is free and open to the public will take place on Thursday, February 9, from 4-6 p.m.

In the summer of 1962, Lyon, a 20-year-old University of Chicago history student, packed a Nikon Reflex and an old Leica in an army bag and hitch-hiked south. Within a week he was in jail in Albany, Georgia, looking through the bars at another prisoner, Martin Luther King, Jr. Lyon soon became the first staff photographer for the Atlanta-based Student Nonviolent Coordinating Committee (SNCC), which already had a reputation as one of the most committed and confrontational groups fighting for civil rights.

This exhibition at Hofstra highlights the events and individuals that Lyon captured as SNCC’s staff photographer.  He was present at some of the most violent and dramatic moments of civil rights history: Black Monday in Danville, Virginia; the aftermath of the bombing of the Sixteenth Street Baptist Church in Birmingham; the March on Washington in 1963; the violent winters of 1963 and 1964 in Atlanta; and the Mississippi Freedom Summer of 1964. But Lyon’s photographs are more than a record of marches, jailings, and protests. They take us inside the Movement – to the meetings, organizing work, and voter registration drives that were the less visible but no less important side of the struggle. Many people have since forgotten the idealistic and truly multiracial character of the movement’s early years. Lyon’s pictures, taken during the early 1960s, chronicle the Southern Civil Rights Movement at the height of its power.

Curated by Karen T. Albert, Hofstra University Museum deputy director and chief curator, this exhibition brings together the photographs Lyon took from 1962-1964, defining a new form of photojournalism in which the image maker is deeply and personally embedded in his subject matter.

The February 9 opening reception will feature guest speaker Dr. Jonathan Lightfoot, director, Center for “Race,” Culture and Social Justice at Hofstra University. There will also be a musical tribute by Gequon Hunter and Jazara Morales, students from the Hofstra Gospel Ensemble, as they perform songs that were, and continue to be, a source of strength and hope in the ongoing effort toward equality and justice for all.

Additional specialized programming offered in conjunction with the exhibition includes:

In honor of Creativity Week at Hofstra University, Connie Roberts, Hofstra University adjunct assistant professor of English and published poet, will facilitate a poetry workshop inspired by Danny Lyon: Memories of the Southern Civil Rights Movement. Participants will share the poems they create with the group. Limited to a maximum of 12 participants. $7 general and $5 for seniors (65+).

February through May – 1:30-2:30 p.m., families with children ages 5-10 may create their own works of art during Second Saturdays at the Hofstra University Museum Emily Lowe Gallery. Themed topics include:  Balance It!; Tell It!; Model It!  Advance registration is required.  Program fees: $7 per child per session when prepaid ($9 when paid day of the program); $12 per child for two sessions prepaid; $18 per child for three sessions prepaid; $21 for all FOUR sessions prepaid.

For more information about this exhibit and associated public programs please call (516) 463-5672 or visit the Hofstra University Museum website at hofstra.edu/museum.

A Toddle House in Atlanta has the distinction of being occupied during a sit-in by some of the most effective organizers in America when the SNCC staff and supporters take a break from a conference to demonstrate, 1963, gelatin silver print, 16 x 20 in., ©Danny Lyon, New York & Magnum Photos, New York / Courtesy Edwynn Houk Gallery, New York