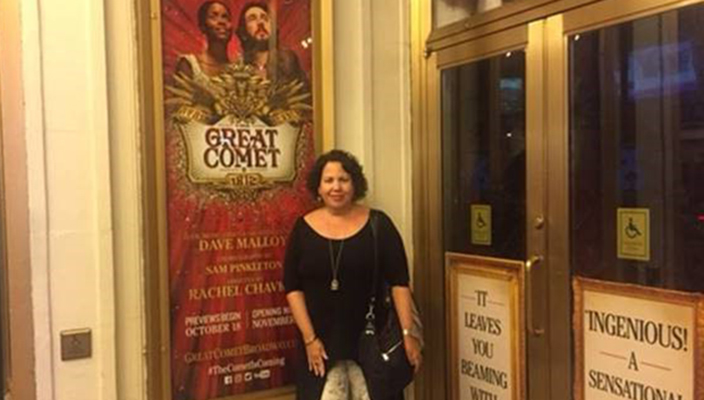 When Natasha, Pierre & The Great Comet of 1812, the musical adaptation of a 70 page portion of War and Peace starring Josh Groban, had its Broadway premiere in October, Hofstra alumna Robin Gorman Newman ’81 also celebrated – as one of the show’s co-producers. But for the entrepreneur, author, publicist, marketing expert, dating coach, and family advocate, trying a different business on for size is nothing new. She has had an exciting professional life navigating a wide variety of opportunities.

The Great Comet is not Robin’s first foray into theater. She was recently an investor in the Broadway comedy Sylvia and an associate producer on the Off-Broadway production Motherhood Out Loud, which was at Primary Stages in New York City and is now playing regionally. For decades she has been reviewing theater and has studied playwriting. “Once you get involved in theater,” Robin says, “you can start putting out to the universe what your interests are. I was fortunate that my desire to produce was heard, and I was invited to see Natasha, Pierre & The Great Comet of 1812 when it was playing in Cambridge [MA]. I loved it. It was so different from anything I’d ever seen before. So I thought, yeah, I’ll come on board.”

Asked what was expected of her as a producer on such a highly-anticipated production, Robin explains, “As a co-producer, you go out and seek investors to help stage the production. Once you raise a designated amount, you can sit in on marketing meetings where strategies are shared. There was so much to work with on this show – a really strong following from runs it had Off-Broadway and in Cambridge. Plus, there is the Josh Groban fan base and his excitement over making his Broadway debut.”

Robin grew up in Fresh Meadows, NY, and chose to attend Hofstra because “I wanted to go away to school but not too far away. The campus was warm and made me feel welcome.  Plus, it wasn’t far from the city.” Though she had enjoyed writing her entire life, she chose to go in an entirely different direction for her major. “I didn’t study writing because I didn’t feel that I had to. I opted to just write. Instead I majored in economics with a French minor, which seemed practical at the time.”

She covered the arts for Hofstra’s student newspapers, and this helped fuel her dreams of being a theater critic. “For some unknown reason, when Frank Rich was hired by The New York Times as their chief theater critic [in 1980], I really felt like he stole my job. I thought, ‘now what am I going to do?’” After graduation she worked in marketing and public relations for Warner Cosmetics (the Ralph Lauren brand) and Eastman Kodak Company.  She parlayed that experience into a job with a boutique PR firm, Delibes Communications, where she worked with Revlon, and then KCS&A Public Relations, eventually becoming a vice president.

While she was at KCS&A she met her future husband, Marc Newman, on a singles vacation to London and Paris. During their first year of marriage, she began jotting down notes about dating and socializing. She was also covering the arts and cultural hotspots as a freelancer for The Queens Tribune and a number of other city publications. She ultimately spun her ideas and strategies into a book:  How to Meet a Mensch in New York, which was later followed by How to Marry a Mensch.

After she and Marc adopted their son Seth in 2003, Robin founded “Motherhood Later Than Sooner,” a worldwide organization and resource for those who became a mom at age 35 and older. Inspiring other women to welcome exciting opportunities later in life is something she’s long felt strongly about. Co-producing The Great Comet is just the latest example of this for her. “I think I’ve always been a bit of a late bloomer,” she says. “You never know what life can offer.  My door has always been left open to new creative possibilities, and I love teaming up with others to share the journey.”

Robin’s next new venture is her involvement in BroadwayCon, a weekend convention scheduled for this January at New York City’s Javits Center that will feature discussions, performances, interviews, workshops and more. She will host a panel “From the Page to the Stage,” featuring theater professionals who have helped adapt books for the Broadway stage. At the suggestion of a Broadway producer, she is also exploring spinning the material from her own books into an Off-Broadway musical.

“I’m not someone who has had a major life plan, but theater has always been a big part of it,” she says. “I’m grateful, delighted and proud that The Great Comet is my Broadway debut as a producer. It’s a stunning production, and to help support the high level of talent involved and to see audiences enjoying is a feeling that fuels my passion for theater all the more.  I’m excited to see what is up next for me in this arena.”