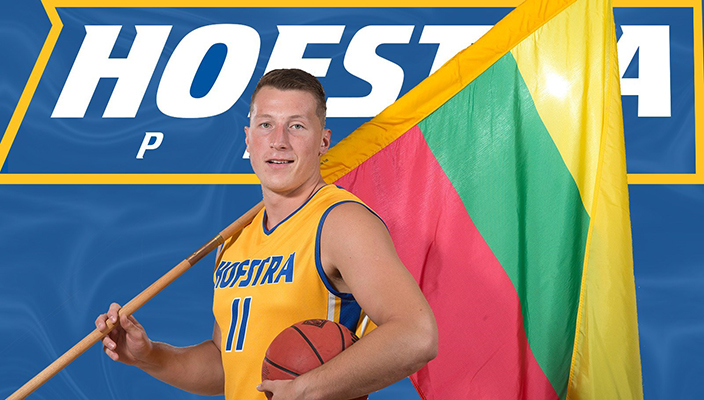 Growing up in his home country of Lithuania, Rokas Gustys knew two things – that he would play basketball and that he would one day come to the United States of America to pursue his education and hoop dreams.

“Lithuania is a basketball country and I grew up in a basketball family,” said Gustys. “My brother played basketball and we used to watch basketball on TV all the time. I remember starting to play when I was 5 years old.”

Fast forward 13 years later when an 18-year old Gustys was in China during Lithuanian National Team tryouts which included an exhibition game against Oak Hill Academy. “I always wanted to come to the United States, but was never really serious about it as my parents were concerned that I was too young,” Gustys explained. “Around age 16 I started to look more closely, but kept putting it off. But when I played against Oak Hill, I thought this team was really good and I would love to play for them. So I started speaking with Coach Steve Smith and asked for an opportunity. Oak Hill loved having international players attend the school and they offered me a scholarship, so I knew I had to take this once-in-a-lifetime opportunity.”

Playing at Oak Hill Academy, an elite prep school in Virginia that has been a national basketball power and boasts a litany of former players that went on to star in college and the NBA, was a great experience for Gustys. “I truly enjoyed my time at Oak Hill,” he said. “It was a great experience. The school was small, so you got to know everyone and experience the different cultures. Playing for a future Hall of Famer in Coach Smith and competing in the gym where players like Carmelo Anthony and Kevin Durant played and to see the various jerseys hanging from the rafters was amazing.”

As a senior at Oak Hill, Gustys helped the Warriors to a 41-4 record and a number four ranking in the USA Today Sports Super 25. He averaged 12 points and a team-best nine rebounds per game that season and caught the eye of then Hofstra Assistant Coach Shane Nichols.

As Hofstra Coach Joe Mihalich recalled, “Shane was doing his due diligence and I remember him telling me about a big kid at Oak Hill Academy that he liked. He thought he was a good player and had a good future. So we started going down there to see Rokas play and we fell in love with him. It was fun recruiting him because he is such a good person. When he made his official visit, his mom flew in from Lithuania and his uncle came down on his own from Montreal. He had a good visit and I think that is when he realized that this was the place for him.”

Gustys fondly remembers his Hofstra recruitment as well. “I knew Coach Mihalich liked me when he was willing to drive two hours in the mountains of Virginia to see me play,” he said. “So when I decided to come for a visit, my mom flew over to join me. We saw how beautiful the campus was and how nice everyone treated us, so I thought I have a chance to be a really good player here.”

When the 2014-15 season began, there was a great deal optimism surrounding the Pride with Gustys joining a team that was also getting transfers Juan’ya Green, Ameen Tanksley and Brian Bernardi eligible. “I remember scrimmaging Saint Joe’s and he was the best big guy on the floor,” said Mihalich. “But after that he got hurt and we had to shut him down for a bit. So he missed all that development time and when he came back he was less than 100 percent. But he did have some nice moments for us down the stretch.”

Gustys’ feelings about his freshman campaign were more direct. “My freshman year was frustrating for everyone,” he said. “We all had high expectations as a team and hoped to win a Colonial Athletic Association Championship. Personally, I was aiming to be CAA Rookie of the Year. So it was disappointing that I was injured. After sitting out I still wasn’t 100 percent, but I was feeling pretty good by the end of the season. The experience definitely helped me build towards my sophomore season.”

And what a sophomore season it was. After averaging 5.2 points and 5.7 rebounds per game as a rookie, Gustys saw those numbers blossom to 13.5 points and 13.0 rebounds per game. The 13 rebounds ranked second in the nation and led the CAA. He was a double-double machine, posting 22 on the season including 11 consecutive to end the year. Gustys helped the Pride to a 24-10 season, a regular season CAA Championship, a spot in the CAA finals and an NIT appearance. He garnered multiple awards including All-CAA First Team and CAA All-Defensive Team accolades. He also was an All-CAA Championship selection following a tournament record 23 rebounds in the final against UNCW.

“Rokas really blossomed last season,” Mihalich stated. “He really found his niche and learned to play off of guys like Juan’ya, Brian and Ameen. I think it was the James Madison home game that put him over the hump. I believe he had 25 points and 20 rebounds in that game and it was at that moment I believe he realized he could be a dominant rebounder.”

Mihalich has witnessed first-hand Gustys’ development as a player and is quick to praise his star player’s work ethic. “Rokas is in the gym as much as Brian Bernardi, who I always say has no equal. But Rokas is starting to rival Brian in terms of putting the extra time in. He has been a coach’s dream.” The fourth-year Hofstra mentor also shared his thoughts on Gustys’ rebounding prowess. “Rokas is a space-eater,” he explained. “He is incredibly strong, so once he establishes space you cannot move him. He is quick to the ball, has great hands and that will to get a rebound.”

Gustys has picked up where he left off last season and is averaging 9.3 points and an NCAA-leading 13.5 rebounds per game through 10 contests. He set a career-best with 25 rebounds against South Dakota on November 23 and has been in double-figures in seven games. But Gustys is under no illusion that his game has peaked.

“I know I need to improve my free throw shooting,” Gustys said. “Before the first game, I hurt my finger and had to play with it heavily taped and I missed all my free throws and that is on my mind. But I do want people to know that I can make free throws. In practice I do, but I know I need to keep at it. Another aspect I try to improve on is my jump shooting. I know that I need to improve my range if I want to play professionally. I also work on my defense a lot because you can always improve in that area. I try and come in before my morning classes to shoot free throws and jump shots, and then I have a pre-practice routine of layups and hook shots. I always try to put in 45 minutes of work before practice starts.”

Known for his intensity on the court, Gustys shares that he is much calmer off the court. “I am a pretty calm person off the court because I feel I give all of my energy when I play,” he said. “I enjoy my time away from basketball by playing Xbox and watching basketball games on television. I like going to the library to read books and prepare for class, or going to the pool and yoga class. I cannot just sit around and do nothing though.”

Gustys says he does not put pressure on himself to put up certain numbers every game but does admit to wanting to set a new record every time he steps on the court. When asked if he would rather score 20 points or grab 20 rebounds, he answered without hesitation, “20 rebounds.” But he quickly added with a smile that, “having 20 points and 20 rebounds was a pretty sweet accomplishment and I hope to do that again as well.”

As for what awaits him after he graduates in 2018, Gustys has two goals in mind. “I hope to play professionally in the NBA, the D-League or overseas,” he stated. “I also want to play for the Lithuanian National Team. That would be a huge deal for me and my family. But before I leave Hofstra, I hope to win a championship or two.”