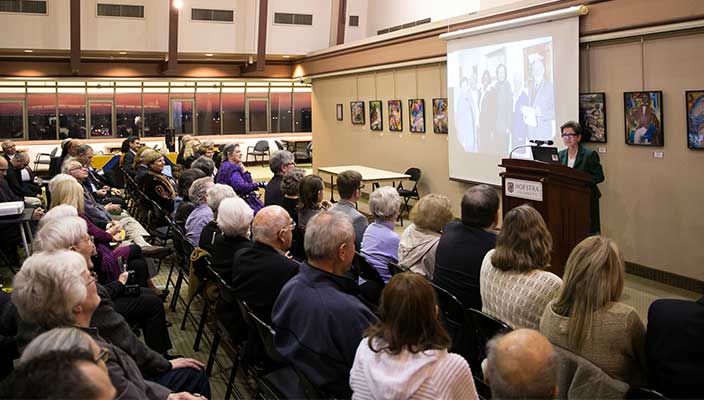 Hofstra alumni, faculty, and members of the community recently joined family members of Professor Emeritus Herbert D. Rosenbaum on the 10th floor of the Axinn Library for a memorial to celebrate his life and illustrious teaching career. Dr. Rosenbaum, who passed away in May 2016 at the age of 95, was a founding member of Hofstra’s Political Science department. He served on the faculty for 39 years.

Dr. Rosenbaum helped found Hofstra’s presidential conference program and trained generations of political scientists. Many of the practices that became tradition during Dr. Rosenbaum’s tenure, among them the Washington and Albany internship programs and the annual Washington trip, are continuing to this day. The presidential conferences were the precursor to Hofstra’s Peter S. Kalikow Center for the Study of the American Presidency and also paved the way for Hofstra to host the 2008, 2012 and 2016 Presidential Debates.

In her introductory remarks, the current chair of the department, Dr. Rosanna Perotti, who also organized the memorial, said, “Herb counted among his students top Washington lobbyists, an ambassador, a US senator, presidential advisers, law professors, political science professors, and public servants at every level of government. They inspired our students as Herb had inspired them. … This was one of the greatest things about knowing Herb: being a part of his giant web of intergenerational, intercultural friendships.  You knew your own students were in awe of him, but so were these alumni who had graduated many years before the students were born.”

Hofstra alumnus and Washington insider Phil Schiliro ’78, who served as President Barack Obama’s director of legislative affairs and special advisor to the president, addressed the audience, reminiscing of an afternoon that Dr. Rosenbaum and HCLAS Dean Bernard Firestone came to visit him at the White House. He said he met earlier in the day with President Obama and mentioned to him that that his favorite professor was coming into town, and the President regretted not being able to join them. “That day that Herb and Bernie came to have lunch with me at the White House was one of the days that meant the most. It brought my life full circle.”

As a young man, Dr. Rosenbaum fled Nazi Germany with his family, arriving in the US in 1937. He graduated from New York University and completed graduate studies at Columbia University, earning his master’s and doctoral degrees there. Another Hofstra alumnus, Lou Liotti ’70, referenced the difficult early years of the man he called his “second father.”

“Hofstra students in the 60s were the sons and daughters of immigrants, and here we were learning about our country from an immigrant. Think about that. It speaks to the kind of person Herb Rosenbaum was and his strength as an educator.”

The Political Science Department has set up a memorial fund in Dr. Rosenbaum’s honor. The goal for the fund is to provide a scholarship or award in Dr. Rosenbaum’s name. Donors may contribute online or send checks payable to Hofstra University to the Office for Development and Alumni Affairs, 101 Hofstra University, Hempstead, NY  11550. In the memo section of the check, note that the contribution is designated for the Herbert D. Rosenbaum Memorial Fund.