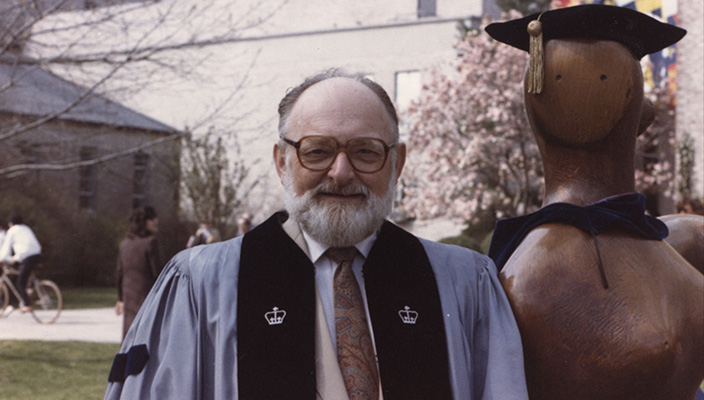 Dr. Rosenbaum, who passed away at the age of 95 on May 18, 2016, was a founding member of the department. He helped found Hofstra’s  presidential conference program and trained generations of political scientists. Many of the practices that became tradition during Dr. Rosenbaum’s tenure, among them the annual Washington trip and the Washington and Albany internship programs, continue today.

The Political Science Department has set up a memorial fund in Dr. Rosenbaum’s honor. The goal for the fund is to provide a scholarship or award in Dr. Rosenbaum’s name. Donors may contribute online or send checks payable to Hofstra University to the Office for Development and Alumni Affairs, 101 Hofstra University, Hempstead, NY  11550. In the memo section of the check, note that the contribution is designated for the Herbert D. Rosenbaum Memorial Fund.

Dr. Rosenbaum was a professor at Hofstra for 39 years, serving twice as chairman of the Political Science Department, as well as director for two of Hofstra’s nationally renowned presidential conferences. He was deeply interested and involved in local and state politics, most notably participating in the rewriting of the New York State Constitution.

He was a rigorous professor and trusted mentor who forged lifelong relationships with his students, including many alumni who went on to public service careers locally and nationally, such as Phil Schiliro, a former senior advisor to President Obama, and New York state Comptroller Thomas DiNapoli.