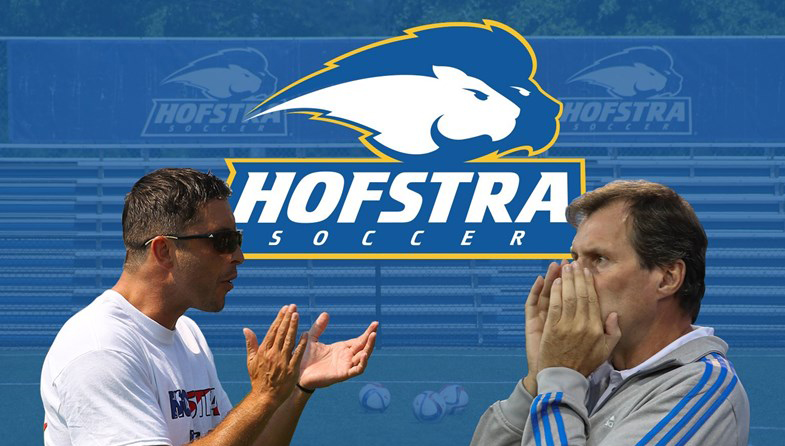 In recent history, both Hofstra Men’s Soccer and Hofstra Women’s Soccer have seen great success. Though both programs undoubtedly carry their own distinct identity, a number of parallels can be drawn between them. One such commonality can be found on the sidelines, with both team’s staffs featuring a long-time right-hand man to the program’s head coach.

Both Hofstra Women’s Soccer Associate Head Coach Tobias Bischof and Men’s Soccer Assistant Coach Gary Book are European transplants – with Bischof hailing from Germany and Book coming from England – but both have made a home at Hofstra. Bischof just completed his sixth season with the women’s program under Head Coach Simon Riddiough and second as the associate head coach while Book is wrapping up his 12th season with Head Coach Richard Nuttall and the men’s program and his eighth as the top assistant.

As natives of countries where soccer is a way of life, Bischof and Book were both involved in the game from an early age.

“My family is heavily involved in the professional game in England, so it was sort of a rite of passage that as soon as I could walk, I was kicking a ball,” said Book. Bischof, whose father and grandfather played, had also been attending games with his family as a young child.

After playing competitively throughout their youth, both took up coaching as young adults. Bischof was competing for a German club program that sponsored a number of youth teams, and he helped run practices and took the opportunity to learn the fundamentals of coaching. When Book’s aims of playing professionally didn’t pan out, he turned to coaching to stay involved with the game.

“To quote the old Woody Allen adage, ‘Those who can’t do, teach’ and those that can’t teach coach soccer,” Book joked.

And for both, coaching is what brought them to the United States. Bischof had hopes of learning English and, through his soccer connections, came to Long Island to help coach youth teams. “Six months was the deal,” said Bischof. “I just learned English during this time, and then six months became – what is it now? – 14 years? Pretty long time now.”

Book also came to work a camp in America and stayed to create the first professional soccer coaches’ organization in the United States. He noted that he was compelled to stay and pursue his business because the culture in the United States is more conducive to entrepreneurship. “You couldn’t do what I what I did here in England,” he said. “[In America], if you’re reasonably good at what you do and you’re willing to work hard, there were a lot more in-roads for the future.”

From there, Bischof and Book formed connections with Hofstra that ultimately led them to their current positions. Bischof was coaching girls’ youth teams on Long Island and had several of his former players on the roster at Hofstra. “Then when the job came open in 2011, I got a phone call from Simon to put an application in and everything after that is history,” he said.

Book had taken a position as an assistant coach at St. John’s, but met Nuttall through his coaching business. “Richie actually did work for me at the company I created, so that’s where our relationship began,” said Book, who in fact mentored Nuttall and helped him come to the United States. “And then I wanted to try and build another program the way we built St. John’s. Through the relationship with Richie, I came here to Hofstra.”

Since Book’s arrival on campus, Hofstra Men’s Soccer has gone 114-87-27 and has captured the past three consecutive Colonial Athletic Association regular-season titles. The Pride made the NCAA Tournament in each of Book’s first two seasons with the squad (2005, 2006) before returning to the postseason in 2015 after capturing the CAA Championship. Hofstra hosted a first-round game last season, beating Lehigh to advance to the second round, and Joseph Holland was named a second-team NSCAA All-American and CAA Player of the Year.

Nuttall notes that he views Book as a co-head coach and a driving force in the program. “He’s incredibly dedicated and hard-working,” said Nuttall. “He does all the analysis of games – he’s probably one of the best in the country at analyzing games. His soccer IQ, his coaching IQ is tremendous.”

Hofstra Women’s Soccer has posted double-digit wins in each of Bischof’s six seasons with the program, posting a 67-43-9 record and advancing to the NCAA Tournament in 2012 and 2015. The Pride won the CAA Championship in 2012 for an automatic berth and took home the regular-season conference title in 2015 before earning at-large bid. With Bischof on the sidelines, Sam Scolarici set the program records for goals and assists and Leah Galton won three consecutive CAA Player of the Year awards.

Of Bischof, Riddiough said, “He’s more than educated and experienced enough to be his own head coach of a Division I program. I’m very lucky to have him. He’s extremely dedicated and loyal to the program and the girls and me as well.” Riddiough also believes that Bischof’s organizational skills and tactical awareness are complementary to Riddiough’s coaching style. “From a personal perspective, I trust him wholeheartedly with the program.”

BIschof added: “We have a very, very good relationship within the coaching staff. I think we all three work very well with each other. After that, it’s just having good relationships with the players just trying to get the most out of every single one of them. That’s always the goal.”

Throughout Bischof and Book’s careers in Hempstead, the Hofstra Men’s and Women’s Soccer program have congruently developed a culture of grit and resilience. Bischof credits his squad’s high-energy style of play that frequently overwhelms opponents and Book mentions his team’s underdog mentality when taking on big-name schools. Both agree, though, that the most significant contributor to the program’s culture is the character of the student-athletes they recruit.

“We use the players who buy into our system and are willing to put the work in – those are the kids who play for us and it shows on the field,” said Bischof.

Book added: “We’re bringing in the players that want to be part of a big challenge and want to compete at the highest level but know in order to do that, they’ve got to have a tremendous determination to work hard and be able to stick with all the teams around.”

Between two men who have deep soccer roots, travelled to America to pursue the game and have stuck around to help Hofstra rise to greatness, perhaps their biggest parallel is their unbridled compassion for their student-athletes.

“The positive side on working with them is seeing them growing up as a person and really becoming adults in the four years that we have them here,” said Bischof. “And that’s just awesome to see how they start out as a freshman when you almost can’t talk to them to seniors when you can joke around with them. It’s a very neat situation.”

Book agreed: “Like the women’s program, we’ve been very fortunate to have a great deal of success in terms of championships and season titles and players of the year, et cetera, but for me the biggest part are the players and how they develop and mature through the process and seeing them move on out of here, and seeing what they achieve afterwards is by far the best thing.”