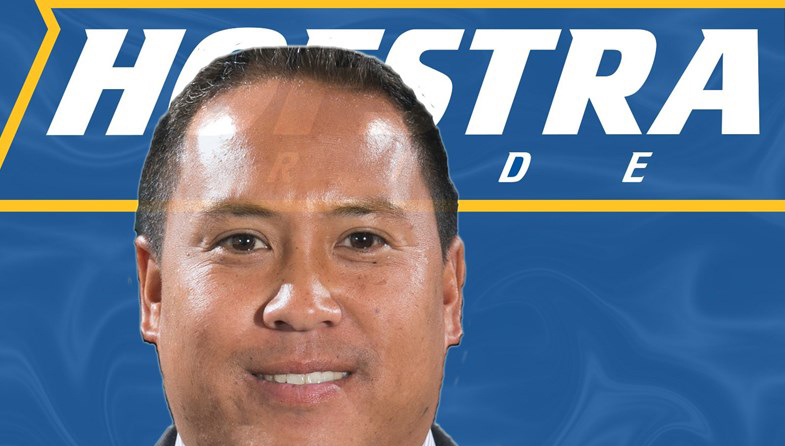 The path that led Jason Pasion to becoming a collegiate tennis coach was a winding one. Hofstra’s newest head coach, starting his position as coach of the women’s and men’s programs earlier this month, grew up as the youngest of three children in Islip, New York.

Pasion grew up playing baseball, but when he got to Islip High School he knew he had a decision to make regarding his athletic future. Both of his siblings had played tennis at the high school level and his father was a recreational player, but Pasion didn’t pick up a racket until the end of seventh grade.

“I wasn’t the biggest kid on the baseball field,” said Pasion. “I was kind of scrawny and I knew I wasn’t going to compete with the bigger kids on the baseball field. My dad was a huge tennis fan, as were my brother and sister, and one day we were at the high school and my dad got me to give tennis a try and I did pretty well that day. It was a lot of fun and later that night I asked my dad if I could take lessons. About two weeks later I had my first lesson with Dennis Christofor and he would become my full-time coach.”

It didn’t take long for Pasion to pick up the sport and through hard work and dedication, he quickly improved his skills. “I fully committed myself to tennis and it was common for me to be on the court at 7 a.m. and to stay for 8-10 hours a day that summer between seventh and eighth grade. I may not have played the whole time, but I watched the older kids play and studied them. I also helped my coach with his lessons by retrieving balls. That is how I helped pay for a lot of my lessons, by working for Coach Christofor while he taught others.”

Before long, Pasion was competing on the United States Tennis Association Junior circuit, competing in tournaments and eventually earning a sectional and regional ranking. After completing his successful junior career, Pasion took his talents to SUNY Oswego where he enjoyed an outstanding career as a number one singles and doubles player as well as a two-year team captain. “Playing at Oswego for coach Fayek Megeed was an amazing experience,” said Pasion. “They are some of the best memories of my life.”

While Pasion focused on tennis and had aspirations to play professionally, his parents wanted to make sure he had a strong academic background and steered him to major in business. But after one business statistics class, he realized that was not the path he wanted to take and switched his major to biology and psychology in order to pursue a pre-med degree.

Pasion had gotten a taste of working in the medical field in the summer prior to his freshman year at Oswego when he volunteered for the Exchange Ambulance of the Islips Volunteer Ambulance Company. The funny part of that is that his love of playing baseball is what led him to volunteer. “My brother was working as an EMT with the ambulance company and they had a summer softball team,” Pasion explained. “The only way that I could play on the team was to volunteer, so I did, and it led to something I enjoyed doing.”

After graduating from Oswego in 2000, Pasion had decided to attend medical school in the Philippines. But about a month before he was to leave, Pasion’s father was diagnosed with cancer. That led him to put medical school on hold. Instead, he continued playing tennis tournaments and got his first taste of coaching by working as hitting partners with some junior players. He also received training and became an emergency medical technician. Following the terrorist attacks of September 11, Pasion decided to leave the EMS field. “I was there assisting at Ground Zero after the towers fell and it deeply affected me,” Pasion said. “I wanted to remain in the medical field because I want to make a difference in people’s lives, so I started physician’s assistant school at Touro College and I graduated in 2007.”

During his time in school, Pasion stopped playing and coaching to focus on his studies and while working in private practice following graduation, he realized how much he missed the game. “I felt I had this hole in my heart, that something was missing – and it was tennis,” he said. “So I went back to coaching. I began coaching a junior player by the name of Dylan Roberts full-time while also continuing my PA career. I worked with him for a few years and saw how much of a difference I was making. He achieved a national ranking and earned a college scholarship at Siena. So after that I realized that my heart was in coaching, so I decided to put my medical career on hold and pursue coaching to see where it took me.”

After a few years of coaching privately, Pasion would eventually land his first collegiate job at NYIT in 2014. “Cory Hubbard, who is the assistant coach at St. John’s, told me that the position opened up at NYIT and recommended that I apply for the job. He knew I had a lot of success coaching junior players and that this would be a good spot for me to get my foot in the door at the next level.”

“It was a fun ride at NYIT,” said Pasion. “I give a lot of credit to my predecessor (Chris Frusci) for recruiting some excellent players and I was able to continue that as well as develop the talent we had and make them better.”

While Pasion enjoyed his time at NYIT, the opportunity to coach at the Division I level was something he could not pass up. “I am glad to be at Hofstra and I am looking forward to working with our student-athletes and helping them become better players on the court as well as students in the classroom. I am as proud of the academic success that my players have as I am of their tennis achievements.”

As for his coaching style, which he credits to mentors such as Coach Christofor, Coach Megeed and Jay Harris from the Sportime/John McEnroe Tennis Academy as well as basketball coaching legend John Wooden, Pasion explains, “I feel that practices should be harder than the matches. I believe in preparation and hard work, and that winning will be a byproduct of that.”

Another aspect coaching that Pasion is very proud of is his association with the United States Tennis Association and the Intercollegiate Tennis Association. “I was asked to be an Eastern Section National coach by the USTA and for the last few years I’ve been traveling to national events with some of the country’s top junior players. I also captain the men’s intersectional team, which competes for the prestigious George Myers Church Cup. In addition, I help out with youth clinics and other USTA events because I feel it is very important to give back to the game. Tennis is a very expensive sport to play and the USTA helps keep it accessible to most people with affordable clinics for youth players, so I try and volunteer my time as much as possible to help our sport grow. As for the ITA, I became involved when I started coaching at NYIT and served on several committees including running the regional tournament.”

It is said that if you choose a job you love, you will never have to work a day in your life. Having taken the circuitous route to coaching, Jason Pasion embodies that quote, and while he was content working in the medical field he found his true passion in tennis.