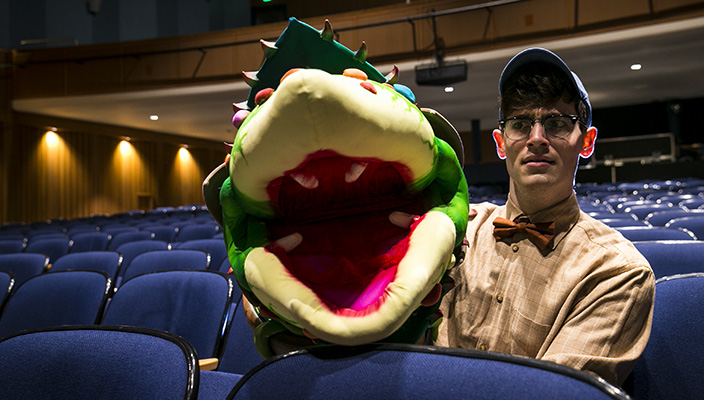 The Department of Drama and Dance presents the cult rock musical Little Shop of Horrors, the story of boy meets girl and plant eats people. Featuring book by Alan Menken, book and lyrics Howard Ashman and direction by Professor Jennifer Hart, Little Shop is the first production to be performed at the Toni and Martin Sosnoff Theater at the newly renovated John Cranford Adams Playhouse.

Little Shop is about Seymour, a florist shop worker who raises a monstrous plant that feeds on human blood and flesh. Featuring songs like “Suddenly Seymour,” “Feed Me (Git It),” “Skid Row (Downtown),” “Somewhere That’s Green,” Little Shop, the musical, premiered off-off-Broadway in 1982 before moving to the off-Broadway Orpheum Theatre, then Broadway, and ultimately the silver screen.

Director Jennifer Hart explains that before the musical, Little Shop was born as a B-movie directed by Roger Corman. “Little Shop of Horrors began as a black and white movie in 1960.  The story is a cautionary tale that reflects a time when there was mass hysteria of alien invasions, atomic bombs and the Vietnam War.  It spoofs horror movies, comic books, Film Noir and musical theater.”

The black and white and pop culture visuals are melding together at the Playhouse. Hart says, “My idea is to use the works of pop artists at the time- mainly Lichtenstein, to create the dull, monochromatic world that Seymour lives in at the beginning of the show.  As the plant gets fed, and Seymour falls deeper into fortune, the set and costumes take on the dark, saturated colors of 1960s pop art. It transforms from being black and white with Film Noir qualities into the colorful horror movie it really is.”

Photo: Richie Dupkin as Seymour with the hungry Audrey II.