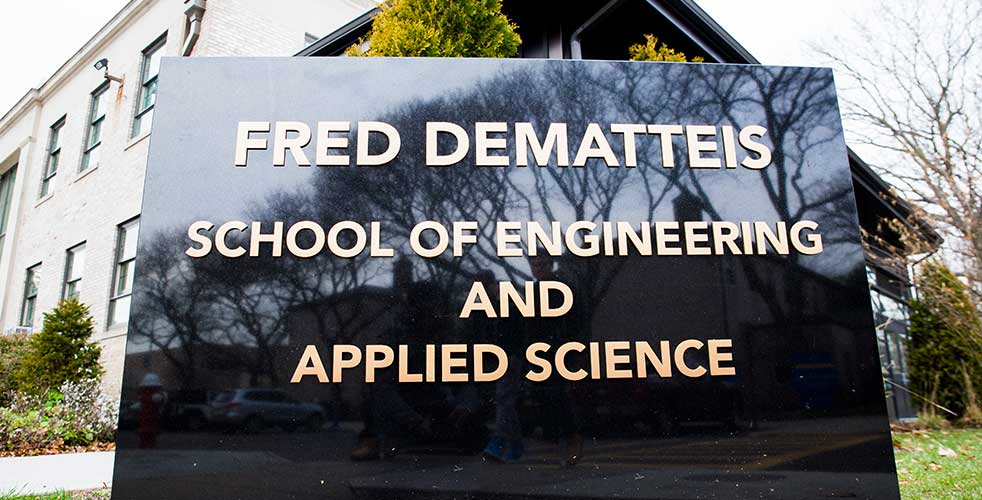 Hofstra University will name its School of Engineering and Applied Science for visionary builder Fred DeMatteis, the longtime chairman and chief executive officer of The DeMatteis Organizations, to honor his leadership, his contributions to construction and real estate development in the New York metropolitan area, and his strong commitment to charitable causes through philanthropy and volunteerism.

DeMatteis, who died in 2001, left an enduring mark on the region’s skyline, among them the residential Museum Tower over the Museum of Modern Art, the 100 United Nations Plaza residential tower, the Ruppert-Yorkville Towers and Knickerbocker Plaza, and the development and construction of the former EAB Plaza (now RXR Plaza).

Under his leadership, The DeMatteis Organizations built hundreds of millions of square feet of residential and commercial real estate and public projects regionally, nationally and internationally.

A convocation is scheduled October 20 at 11 a.m. to celebrate the naming of the Fred DeMatteis School of Engineering and Applied Science. The ceremony will be held in the Student Center Theater, Sondra and David S. Mack Student Center, North Campus.

The DeMatteis Organizations are a third-generation family-owned group of companies that was founded by Fred DeMatteis’ father, Leon. Fred DeMatteis joined the organization after earning a Purple Heart and Presidential Citation for his service as a bombardier in the Army Air Corp. during World War II. The companies are now run by his sons.

Even as he built soaring structures, DeMatteis remained grounded, investing time and resources in charities and organizations that support education, health and the arts through The DeMatteis Family Foundation, which he founded in 2001 with his wife, Nancy DeMatteis.

He served as a Hofstra University trustee from 1986-1989 and was awarded the University’s Presidential Medal, which recognizes outstanding professional, public service and humanitarian achievements and contributions. Nancy continues to be a generous benefactor of Hofstra University.

“In his lifetime, Fred DeMatteis exemplified the integrity, work ethic and imagination that we seek to instill in students of the School of Engineering and Applied Science,” said Hofstra President Stuart Rabinowitz. “As successful as he was as a builder, Fred DeMatteis’ legacy is much more than bricks and mortar; it can be seen in the work of the institutions that he supported, and in the lives those institutions touch. Nancy’s continued commitment to the work of the foundation they created together honors his memory and improves our community every day.”

“The Fred DeMatteis School of Engineering and Applied Science will train the next generation of engineers and computer scientists to emulate his creativity and community service,” Rabinowitz said.

Beyond his generosity to Hofstra, DeMatteis served on many boards, including The Home Depot, Inc., of the Long Island Savings Bank, and St. Francis Hospital, where he served as its chairman from 1985-1987. He is also the recipient of the Long Island Distinguished Leadership Award.

TagsSchool of Engineering and Applied Science