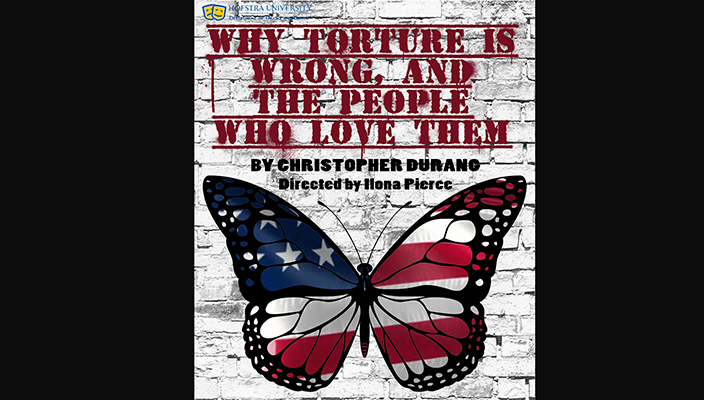 Through October 9 at the Schaeffer Black Box Theater

Hofstra University’s Department of Drama and Dance presents Christopher Durang’s political satire Why Torture is Wrong and the People Who Love Them, at the Schaeffer Black Box Theater, September 30 through October 9. The play is the first of the department’s 2016-2017 season, and it premieres fittingly just days after the first presidential debate on the Hofstra campus.

The play opens in New Jersey, 2008: Felicity wakes up next to Zamir, whom she doesn’t remember. Zamir tells her they’re married! He has bad credit and no job. Felicity runs to her parents for help. Her father (Leonard) suspects Zamir is a terrorist and her mother (Luella) makes French toast. Leonard shows Zamir his butterfly collection which is really a room filled with guns and ammo. A secret agent named Looney Tunes shows up and some gruesome stuff happens. Then things get weird.

Written at the end of the Bush years (but arguably more relevant today), Durang pushes the boundaries of political satire with this piece he calls, “a comic catharsis.”  Why Torture is Wrong and the People Who Love Them is a perfect outing during this election season.

Members of the Hofstra community receive up to two free tickets upon presentation of a current HofstraCard. Tickets are $10; $8 senior citizen (over 65) or matriculated non-Hofstra student with ID. For tickets call the Hofstra Box Office at (516) 463-6644 or visit www.HofstraTickets.com.