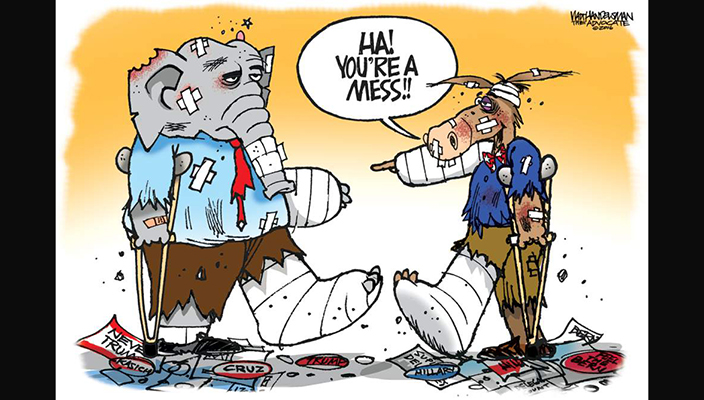 An opening reception for the exhibition will take place on Thursday, October 27, 2016, 4-6 p.m. with Lawrence Levy, Executive Dean, National Center for Suburban Studies at Hofstra University serving as guest host and speaker.  He is a frequent commentator on this current national presidential election on both Cablevision Channel 12 and National Public Radio. This event is free and open to the public.

“Political Slant II: Editorial Cartoons highlights today’s headlines and issues with pointed satire and humor,” said Hofstra University Museum Executive Director Beth E. Levinthal. “Utilizing their talents, our featured artists give audiences insight into the important issues of our day in a manner that invites us to reconsider our viewpoints.  We thank the New York Community Bank Foundation and the New York State Council on the Arts for their generous support in bringing this exhibition to the public.”

The David Filderman Gallery is located on the ninth floor of the Axinn Library, located on Hofstra’s South Campus. For more information on this exhibit and associated public programs please call (516) 463-5672, or visit the Hofstra University website at www.hofstra.edu/museum.

Sept 30 Opening for “Why Torture is Wrong and the People Who Love Them”
Post-Debate Events, Sept. 27