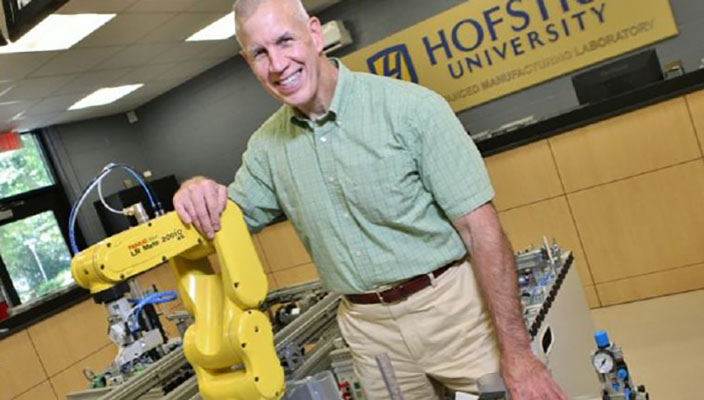 ThermoLift and Hofstra University’s Center for Innovation have formed a strategic research partnership for advanced mechatronic control. The goal of the Center for Innovation, conceived by Dr. Kevin Craig, has been to create collaborative programs that help companies solve their business challenges while exposing Hofstra’s engineering students to real-world applications of what they are learning. The key to the Center is that all work is done by faculty in a 3- to 6-month time frame and intellectual property (IP) belongs to the sponsor.

ThermoLift is developing a cold-climate, natural gas, air-conditioner and heat- pump technology that combines heating, air-conditioning, and water heating into a single appliance. It can provide a 30-50% reduction in building HVAC costs, as well as associated reductions in greenhouse gas emissions.

The collaboration between ThermoLift and the Center for Innovation began in June 2016. Now ThermoLift is ready to move forward into the testing cycle of its 2nd–generation prototype, with funding from the U.S. Department of Energy (DOE) and New York State Energy Research and Development Authority (NYSERDA).

“The partnership with the Hofstra Center for Innovation provided ThermoLift access to expertise in mechatronic system design and control adding to the depth of the team’s capabilities. It has built on the excellent foundation established at the Advanced Energy Research and Technology Center at Stony Brook University and is an example of collaboration between two fine Long Island universities,” said Bob Catell, Chairman of the Board of AERTC, Executive in Residence at Hofstra University, and the former Chairman of National Grid and the American Gas Association.

The team at Hofstra includes direct participation of four PhD faculty members and the active participation of Hofstra’s most accomplished engineering students. A May 2016 Mechanical Engineering BS graduate, Christos Dimosthenous, worked with Professor Craig in the Center for Innovation during the summer and has since been hired as a full-time ThermoLift employee.

“Kevin has positioned engineering at Hofstra at the nexus between education and industrial practice. The Center for Innovation offers previously untapped opportunities for academic and industrial participants to interact in projects that benefit all concerned. As the Center grows its operations, it expands our footprint in the Long Island economy,” said Dr. Sina Rabbany, dean of the Hofstra School of Engineering and Applied Science.

Professor Craig, a graduate of West Point and Columbia University, was Professor of Mechanical Engineering at Rensselaer Polytechnic Institute, where he developed the Mechatronics Program starting in 1992. During his tenure he graduated 20 PhD students, most funded by industry. Over the past 20 years, he has conducted hands-on, integrated, customized, mechatronics workshops for practicing engineers nationally and internationally, e.g., at Xerox, Procter & Gamble, Rockwell Automation, and Johnson Controls in the U.S., and at Fiat and Tetra Pak in Italy. He is a Fellow of the ASME and received the 2014 ASME Outstanding Design Educator Award, a society award.