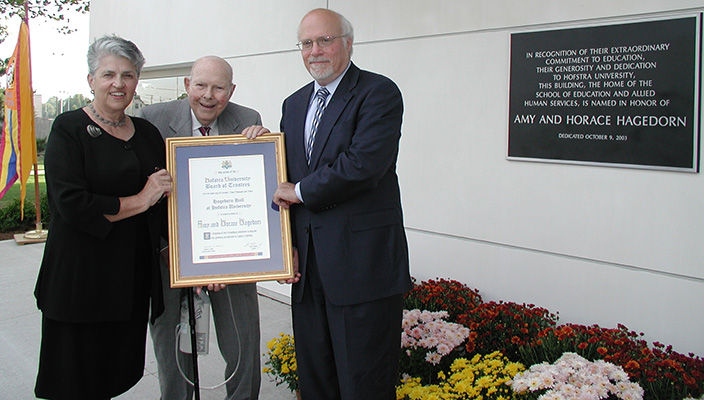 A former early childhood educator, Mrs. Hagedorn and her husband, Horace Hagedorn, the founder of Miracle-Gro, began the Horace and Amy Hagedorn Fund which contributed millions of dollars to hundreds of nonprofit organizations, the majority of which were based on Long Island. The Hagedorns’ generosity, combined with a New York state grant, enabled Hofstra to completely renovate a former federal courthouse on its campus. Hagedorn Hall, which opened in 2003, today houses the university’s School of Education.

In 2005 Mrs. Hagedorn was appointed to Hofstra University’s Board of Trustees. Later that year, she and her husband (posthumously) were named honorary alumni of Hofstra. She also served on Hofstra’s 75th Anniversary Honorary Committee and at one time on the University’s Capital Campaign Executive Committee.

Mrs. Hagedorn worked with Hofstra’s School of Education to launch the Hagedorn Teacher Fellowship Program, providing loans for undergraduate and graduate students who demonstrate academic excellence, financial need, a record of community service and a commitment to teaching in a high-needs school district. Hagedorn fellows do their student teaching in districts such as Freeport, Hempstead, Roosevelt, Uniondale and Wyandanch if such a position is available, and then teach in a high-needs school district after graduation. Upon graduation and recommendation for initial certification in one of Hofstra’s teacher education programs, Hagedorn Teacher Fellows are eligible for forgiveness of the equivalent of one year’s loan based on each year of service in a designated high-needs school district.

In memory of Amy Hagedorn, Hofstra University flags will be flown at half-staff.

Photo: L to r – Amy and Horace Hagedorn with Hofstra President Stuart Rabinowitz at the 2003 dedication of Hagedorn Hall.