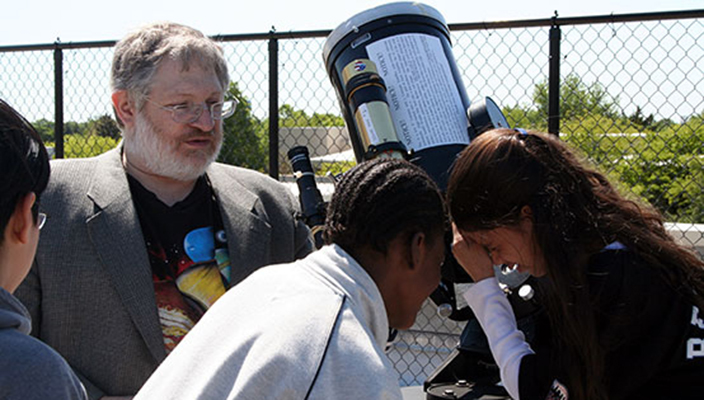 View the moon, Saturn, Mars, double stars, nebulae and star clusters when Hofstra University’s Astronomy program partners with the Sagamore Hill National Historic Site to present an Astronomy Night in honor of the 100th anniversary of the National Park Service. This event will take place on Friday, September 16, from 8-10 p.m. Sagamore Hill is located at 20 Sagamore Hill Road in Oyster Bay, NY.

Dr. Donald Lubowich, coordinator of Hofstra’s Astronomy Outreach Program, will be on hand to give the public this spectacular glimpse of the heavens. There will also be astronomy videos, posters, banners, and hands-on-activities for all ages. The Amateur Observers’ Society of New York is a partner with this program. The event is expected to held even if there is cloudy weather.

“Bringing astronomy to the Sagamore Hill National Historic Site gives us a very special opportunity to encourage children to pursue their interest in science or math and to promote public understanding of science,” said Dr. Lubowich. “Gazing at the rings of Saturn or the Moon’s craters captures the imagination, no matter how old you are.”

Dr. Lubowich also created Hofstra’s popular Stars on Sundays program, an annual astronomy festival that takes place on the National Mall (originally co-sponsored by the White House Office of Science and Technology Policy in 2010)  and a NASA-funded Music and Astronomy Under the Stars program, which brings astronomy outdoor concerts to 50,000 music lovers at Long Island parks and to the Newport Folk, Tanglewood, and Ravinia music festivals.

For more information on the September 16 event at Sagamore Hill visit the park’s website.