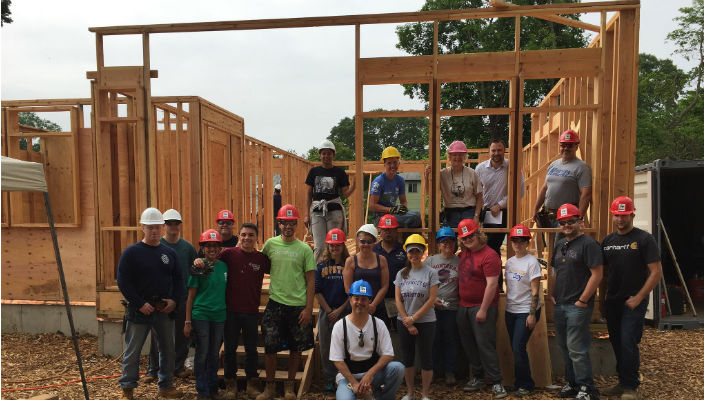 Alumni, employees and family members joined students from Hofstra’s Habitat for Humanity campus chapter earlier this summer to help build a house for a family in need on Long Island.

The group, which included members of Public Safety, Physical Plant, Development and Alumni Affairs, Finance, and Student Affairs, worked on general construction including framing, sheathing and strapping for the exterior of the house, which is located in Roosevelt.

“Seeing the house take shape is something special for everyone,” said Habitat for Humanity campus president Kevin Patalano ’17, of Garden City, NY and a double major in marketing and German.  “A wall raise is a very symbolic and also very structurally important part of the job. You really get to see the house take form and you can stand in the rooms that you know a family will make great memories of their own in, just as the people on the build site made memories during the construction process.”  The house is expected to be completed by the end of the year.

During the build, he presented a check for $750 to Michael Pfeiffer, the executive director of Habitat for Humanity of Nassau County, NY.  The money was raised at the Hearts and Hammers Gala, a fundraising effort at the University Club that also honored student members for almost 1,260 hours of service during the school year, including an alternative spring break trip to New Orleans to participate in Habitat for Humanity’s Collegiate Challenge.

“I think it is amazing that so many people are willing to give up their Saturdays to do something for somebody else,” Patalano added.  “When you have so many people in one spot who are doing things purely for someone else, the energy is indescribable. I am honored to know such a group. Habitat’s work means a lot to me. It has changed my college experience in more ways than one.”

Founded in 1976, Habitat for Humanity has helped build, renovate or repair more than 600,000 affordable houses for 3 million people worldwide.