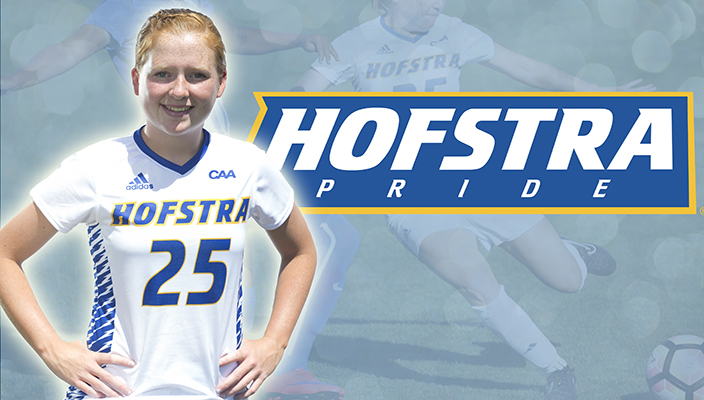 After committing to play Hofstra women’s soccer in high school, Kelly Gerdes tore her ACL in the spring of her senior season at MacArthur in Levittown. With a recovery timeline of 6-8 months, she would miss her freshman season with the Pride. Then, that spring, after finally getting healthy again, Gerdes tore her other ACL in practice, rendering her out of her sophomore season as well.

“It just fell every time in the spring so I’d miss the next fall,” Gerdes, the Wantagh, New York, native said.

Now a junior, Gerdes is finally making her Hofstra debut after having to watch from the sidelines for two seasons. With her twin sister, Katie, and high school teammate, Jill Mulholland, playing for an increasingly successful Pride squad, Kelly couldn’t help but become frustrated.

“We’ve all been playing for so long together that I always wanted to play with them,” she said. “It was really frustrating because I knew I could have potential to play and be on the field. I knew I could—if I worked hard—get my chance.”

Her sister, Katie, noted: “We’ve been on the same team together since we first started playing soccer so to have her not on the field with me to start our college career was really upsetting.”

But, although seeing Katie on the field was difficult, having her twin on the team helped Kelly stay a part of the group even though she couldn’t participate on the pitch. “I have Katie, so it was easy to be involved, because if we were hanging out, I would just go with Katie,” she said.

Katie had suffered her own ACL tear previously, and therefore was able to keep Kelly focused on her physical therapy. “It kept her in good spirits knowing that she can come back better than ever,” said Katie.

And Katie wasn’t Kelly’s only family nearby. Going to school just minutes from home served as a source of solace for Kelly, who would take day trips home on the weekends with Katie to “have barbeques and hang out” with their parents and brother. Kelly recognized the benefit of having her support system nearby and felt she may have struggled if she felt stuck at school on her own while dealing with the difficulty of working back from injury. “She knew if she needed a break from everything going on at school, she was only 15 minutes away,” Katie said.

Kelly also had her second family – her teammates and the coaching staff – cheering her on. “The coaches would always come up to me and be like, ‘How’s PT?'” she said. “They would always ask me how it was going, so I always wanted to show them I was improving.” Once she was cleared to run, her teammates would run with her and practice with her, constantly motivating her to keep pushing.

During games, Kelly and the other injured players would contribute their enthusiasm, cheering from the sidelines. “We stood up for every game,” she said. “Everyone supported the team so much, so it was easy to get into the game. The games were exciting last year so it wasn’t boring just sitting on the bench.”

And, while no one wants to suffer the same injury twice, Kelly owes being familiar with the healing process to her ability to come back stronger and more quickly from her second ACL tear. “There’s pain and then there’s good pain,” she said. “You have to get through a certain pain to get better. I was able to push myself more in the second one.”

Last Friday in the season opener against Buffalo in the Penn State Invitational, in Kelly’s third season on the Hofstra women’s soccer roster, her name was finally called as the public address announcer read out the Pride’s starting lineup. When the national anthem played, she was standing on the field, instead of on the sideline. And her sister, Katie, was there with her.

“Friday’s game was a game I will always remember,” said Katie. “It was the first time we played side by side in a Hofstra uniform after two years of not playing together. It’s something I’ll never forget.”

As a defender, Kelly couldn’t have asked for a much better first game. The Pride earned a 1-0 shutout victory, holding the Bulls to just three shots in an incredible defensive effort. And her parents were cheering her on from the stands, seeing both of their daughters playing on the same field for the first time in over two years.

With her injuries behind her, Kelly can focus on her next soccer-related goals – winning a Colonial Athletic Association championship and helping the team to as many clean sheets as possible. Off the field, her injury has provided somewhat of a silver lining – it’s helped inspire her career choice. She’s studying exercise science and hopes to attend physical therapy school after graduating from Hofstra.