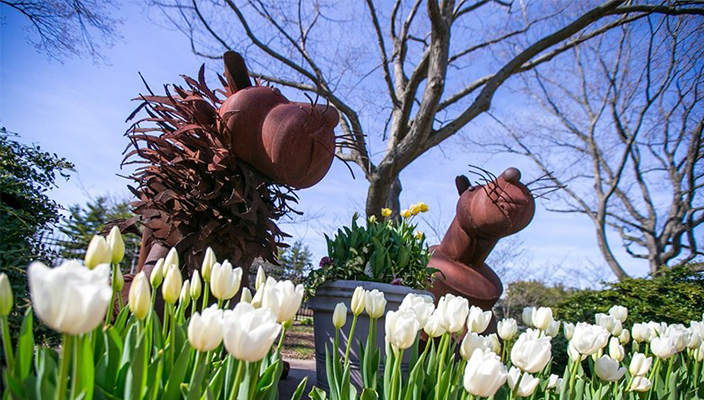 A pair of former two-sport Hofstra student-athletes and the longtime public address announcer of the Hofstra Football and Men’s Lacrosse programs will be among the 31 inductees of the Nassau County High School Hall of Fame Class of 2016 on Wednesday, September 28 at the Crest Hollow Country Club.

The announcement was jointly made by Nassau County Executive and Hofstra alumnus Edward Mangano and the Nassau Country Public High School Athletic Association.

Darius Burton, Jr., a standout on the Hofstra Men’s Basketball team as well as the Pride Men’s Soccer team, Janet Walsh-Rogler, an all-star while a four-year member of both the Hofstra Field Hockey and Women’s Lacrosse teams, and Norm Murray, the longtime voice of Hofstra Football and Men’s Lacrosse at Hofstra/James M. Shuart Stadium will be part of the second Nassau County High School Athletics Hall of Fame class.

At Hofstra Burton was a four-year starter on the basketball team, playing in 111 games and starting 107 under Jay Wright for three seasons and Butch van Breda Kolff for one year. He was voted the North Atlantic Conference’s Floor Leader of the Year as a sophomore and a junior after leading the conference in assists and steals. Burton also led the Pride in assists for four years and steals for three years, and ranks third in career assists and fourth in career steals on the Hofstra all-time charts. He finished his career with 1,060 points, which currently ranks 30th all-time at Hofstra. After his Pride hoops career was through, Burton played one season with the Hofstra Soccer team and earned All-America East first team honors in 1998.

Walsh-Rogler, who is married to former Hofstra Men’s Lacrosse standout Chris Rogler, was a four-sport star at Garden City High School in the early 1990s. She was a three-time All-Nassau County and All-New York State selection in field hockey, and  a three-time All-Nassau County pick and an All-America selection as a senior in women’s lacrosse at Garden City. Walsh-Rogler also accumulated season and career records in field hockey that still stand today and owned records in women’s lacrosse that have since been surpassed.

Following high school, Walsh-Rogler was a dual-sport athlete during her Hofstra playing career, competing on the field hockey team from 1995 to 1998 and on the women’s lacrosse team from 1996 to 2000. As a member of the field hockey team, she was an all-region selection as a junior in 1997 and an All-America East first team pick in 1998. At the time of her graduation, Walsh-Rogler, a member of the Hofstra Athletics Hall of Fame Class of 2011, ranked as Hofstra’s all-time leader in points (127) and goals (55), while finishing eighth all-time in assists (17). She also owned Hofstra single-season records for goals scored with 20 and points with 44 in 1998.

A three-time All-America East selection, as well as a Regional All-American in women’s lacrosse, Walsh-Rogler tallied 101 goals, 48 assists and 149 points during her tenure and ranks in the career top 10 in all three categories. As a senior she tallied a career-high 34 goals and 17 assists for 51 points, earning all-region and all-conference first team honors.

Murray was “the voice” of Nassau County high school football and lacrosse and Hofstra Football and Lacrosse for five decades. A United States Navy veteran who served in World War II, Murray was among the first American troops in Japan at the conclusion of the war. He earned a degree in history and economics from Boston College in 1950 and a master’s degree in history from UMass-Boston. He worked for the Federal Bureau of Investigation (FBI) from 1951 through 1975, serving in Washington, D.C., Baltimore, New York City and Marine Corps Base Quantico. After retiring from the FBI, Murray supervised the Town of Hempstead’s self-insurance system, which he helped create, and also worked at Winthrop University Hospital as a hospital risk manager.

Murray started at Hofstra as a timekeeper but in the early 1960’s became the man behind the microphone, a journey that would last more than five decades. The “Voice of Hofstra Lacrosse” would also become the voice of Nassau County Athletics as he handled the high school games, specifically St. Anthony’s, Nassau County, Long Island and New York State High School Championships and added Nassau Community College football and lacrosse duties as well. Murray passed away in 2013 but will be remembered always at Hofstra as the public address area is named Norm Murray Corner.