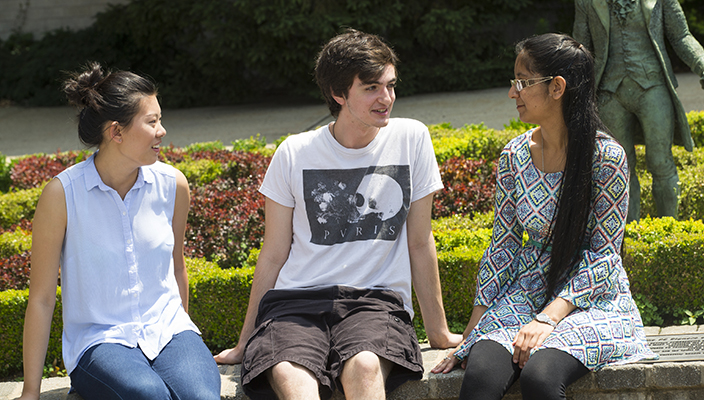 Three biochemistry majors – Manpreet Kaur ’17 from Hewlett, NY; Anthony Sica ’18 from Sparta, NJ; and Laura (Yixuan) Xiong ’18 from Shijiazhuang, China, have been named recipients of the Dr. Bruce and Doris Lister Endowed Fellowship in Chemistry Research. The fellowship is giving them the financial assistance to spend their summer working in the Berliner Hall labs under the mentorship of a Hofstra professor. They were selected based on academic achievement, research potential and demonstrated interest in pursuing a career in scientific research.

Manpreet Kaur is researching trifluralin with Dr. Kevin Bisceglia, assistant professor of chemistry.  Trifluralin is an herbicide or weed killer typically found in the mulch sold throughout Long Island. Because there is inevitably trifluralin runoff in rainwater, they are investigating the photo transformations of trifluralin in water and on the surface of the mulch to determine its environmental and eco-toxic impacts.

In addition to her studies and research, Kaur serves as the public relations chair for SMACS (Hofstra’s chapter of Student Members of the American Chemical Society). Her future plans include medical school, but not before taking a gap year after graduation to pursue some type of research-oriented project.

Anthony Sica is working with Dr. Scott Lefurgy, assistant professor of chemistry, to study the mechanism of bacterial resistance to antibiotics. Due to the overuse and misuse of antibiotics, bacteria have evolved beta-lactamase enzymes that are able to inactivate these life-saving drugs, often within a few years of the drug’s introduction.  To understand this process, Dr. Lefurgy and Sica are using a structure-based approach to compare poorly-active and highly-active enzymes to see which structural features are common to enzymes from resistant bacteria.  Then, using protein engineering, Sica will build a series of new enzymes by grafting key structural pieces of an active enzyme into the scaffold of an inactive enzyme, and vice versa. Engineered enzymes will show the structural features that are essential for resistance to commonly used antibiotics and help drug designers exploit these features for new antibiotics.

Sica serves as treasurer of SMACS and he founded another organization, SIPS, a scientific journal club, that invites students majoring in the sciences to get together to read and discuss articles from scientific journals. He plans to pursue a graduate degree in biophysics.

Industrial processes can produce halogenated compounds, which are toxic to animals and humans when exposed. Laura Xiong and Assistant Professor of Chemistry Emily Mundorff are researching how to break down the small halogenated compounds that commonly exist in industrial waste into nontoxic matter using haloalkane dehalogenase (HLD) enzymes. Dr. Mundorff previously identified a highly active HLD enzyme from Caulobacter Crescentus (DccA).  Now Dr. Mundorff and Xiong are using directed evolution techniques to find mutations to improve DccA’s activity toward toxic chlorinated haloalkanes in order to make this enzyme an effective tool in bioremediation.

When asked why she chose to come to Hofstra, Xiong – who grew up in a city about three hours outside Beijing – laughs and says she was initially intrigued by Long Island after seeing the film The Great Gatsby. She also thought she would get more attention from her professors as a result of the small class sizes. She plans to continue to her studies and eventually earn a PhD.

The Lister fellowship was established with a $250,000 gift from Dr. Bruce Lister and his spouse Doris Lister in 2013. Selected students receive a $4,000 stipend and a grant to cover half of their on-campus housing costs. Kaur says of the fellowship, “Students in the sciences have to find time for their classwork and research – it’s hard to manage a schedule. Summer normally means having to look for a part-time job, and the Lister Fellowship has given me the freedom to work in the labs with Dr. Bisceglia.”

Xiong echoes the sentiment:  “It’s not easy for an international student to remain on campus year-round. To have this chance to stay on campus to do research and get paid – I am very grateful for this opportunity. This fellowship is giving me a chance to do what I love to do. It’s inspiring.”