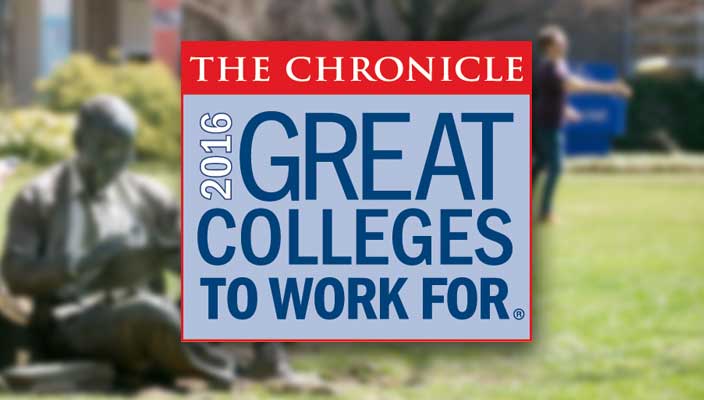 Hofstra University is a great place to work, according to a new survey by The Chronicle of Higher Education. The results, released today in The Chronicle’s ninth annual report on The Academic Workplace, mark Hofstra’s seventh consecutive year achieving “Great College to Work For” recognition.

Hofstra is recognized for excellence in nine of 12 categories in the “2016 Great Colleges to Work For” survey: Collaborative Governance; Compensation & Benefits; Facilities, Workspace & Security; Job Satisfaction; Professional/Career Development Programs; Respect and Appreciation; Supervisor/Dept Chair Relationship; Teaching Environment; and Tenure Clarity & Process. In addition to being named a Great College to Work For, Hofstra was also named a 2016 Honor Roll institution because it was highly rated across multiple categories.

“We strive to create a work environment that values the contributions of every member of the Hofstra community,” said President Stuart Rabinowitz. “Being recognized by The Chronicle of Higher Education year after year affirms that our efforts to develop and support faculty and staff, who in turn are committed to serving our students, are directly linked tothe overall success of the University and our graduates.”

Hofstra is one of only 93 schools recognized — 68 of which are four-year institutions — and is among only 42 schools that were named to the Honor Roll.

“Nine years in, The Chronicle’s Great Colleges to Work For program is well known as a mark of a college or university that puts thought and effort into serving the needs of its faculty and staff,” said Liz McMillen, editor of The Chronicle. “The colleges and universities that make the list are highly rated by their employees for creating great working environments, an important achievement that helps them recruit top academic and administrative talent.”

The survey results are based on a two-part assessment process: an institutional audit that captured demographics and workplace policies, and a survey administered to faculty, administrators, and professional support staff. The primary factor in deciding whether an institution received recognition was the employee feedback.

To administer the survey and analyze the results, The Chronicle worked with ModernThink LLC, a strategic human capital consulting firm that has conducted numerous “Best Places to Work” programs, surveying hundreds of thousands of employees nationwide.

“It’s easier to be a great workplace during good times, but it’s when times are tough that the commitment to workplace quality really gets tested,” said Richard K. Boyer, principal and managing partner, ModernThink LLC. “And those institutions that measure up during times of economic hardship reinforce their already strong cultures and put even more distance between them and their peer institutions for whom they compete for talent.”

TagsGreat Colleges to Work For